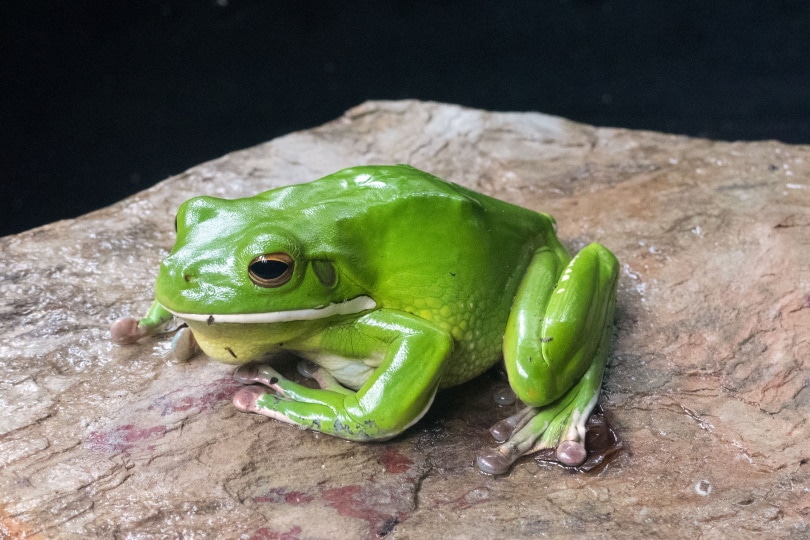 If there’s one animal species that you can expect to find in Florida, it’s the frog. It has big frogs, small frogs, poisonous frogs, and harmless frogs.

With 24 different frog species throughout the state, there are plenty of frogs to find. Here, we gave a quick rundown of each species that you might run into.

The American Bullfrog has an extremely expansive natural range, and you can find them along the edges of lakes, ponds, and rivers. They are cannibalistic by nature and territorial toward other bullfrogs.

American Bullfrogs are extremely invasive frogs in other parts of the world but are native to Florida.

The barking treefrog has a range across the southeastern United States, and one of their primary ranges is Florida. They have a booming population in these regions and have multiple color variations.

The bird-voiced tree frog has multiple colors that can change depending on different temperatures or activity levels. They have extremely loud calls, and that’s how they earned their bird-voiced name.

The carpenter frog gets their name from the sound of their call, which sounds like a carpenter’s hammer. They are mid-range-sized frog that has a longer lifespan.

Cope’s Gray Treefrog is a frog with poisonous secretions that can cause mild extreme discomfort to human eyes, lips, nose, or open cuts. You need to be extremely careful after handling these frogs.

Cuban treefrogs are among the most invasive frogs in Florida. Originally from Cuba, they can get up to 6 inches in size. Since they eat other frogs, this can have detrimental effects on local populations.

Spotting a Florida Bog Frog is far from easy, and if you do, it’s best to leave them alone. They have an extremely small range and are a protected species. You can’t legally take one out of the wild.

The Gopher frog is a protected frog species in Florida. They grow to about 3 inches and have a varied diet that includes other toads and frogs.

The green frog has a varied diet and can reach up to 3.5 inches in size. They make a great pet choice.

Similar to the green frog in name, the green treefrog is a completely different species. These frogs live high in trees and only reach about 2 inches in size. They eat whatever they can find in the branches.

A post shared by Ollie the Rain Gauge Frog 🐸. (@ollie_the_rain_gauge_frog)

Greenhouse frogs are invasive frog species to Florida and are known to be a bit of a pest. However, removing these frogs is a challenging task because they quickly adapt to human conditions and interventions.

The little grass frog is one of the smallest frogs in Florida. They can grow up to 0.6 inches, but the average size is only about 1/2 inch. Despite this, they can live up to 8 or 9 years, although 2-3 years is more common in the wild.

They only live about 4-6 months, so to keep them in captivity, you need to constantly breed them.

The ornate chorus frog comes in a wide array of color patterns and is among the smallest frogs in the United States. They also have a shorter lifespan, only living for about 1 to 3 years.

If you hear a frog in the wild that makes a snorting sound, there’s a good chance that they’re a pig frog. They’re extremely loud and can get extremely large, growing up to 6.5 inches.

The third and final protected frog species in Florida is the pine barrens treefrog. The primary reason for their population getting smaller is habitat loss, and it’s currently illegal to take one out of the wild.

To spot a wild pine woods treefrog, you’ll have to look toward the tops of the trees along the ocean, ponds, or lakes. They occasionally will come down to the surface, but they prefer to stay higher up, where it’s a bit safer for them.

One of the most unique features of the Puerto Rican coqui is the fact that they don’t have webbed feet. Instead, they have special toe pads that allow them to climb straight up vertical structures.

The river frog is a larger frog species that you can find through much of Florida. While you can find these frogs along rivers, as their name suggests, you can also find them in marshes, streams, ponds, and lakes.

The southern chorus frog is another small frog you can find across Florida’s marshes, wetlands, and forests. They have a shorter lifespan that only ranges about 2 to 3 years.

You can find the Southern Cricket Frog across the entire state of Florida. They prefer sunny areas and sound much like a cricket. In fact, the untrained ear might even mistake the two calls.

The southern leopard frog has one of the most unique appearances of all the frog species in Florida. They have a spotted pattern along their back that is similar to a leopard. They are a native frog species to the state.

People say that once you hear the spring peeper frog, you know that spring has officially come. But while you might hear these frogs, spotting their small 1-inch bodies can be a bit of a challenge.

Unlike many frog species, the squirrel treefrog prefers foraging instead of chasing insects most of the time. They’re smaller frogs that can only reach 1.5 inches in length, but they can still live up to 9 years!

While there are 24 different frog species in Florida, most of them are invasive species that humans introduced into the environment. Today, most of these frogs have found an equilibrium, though, so head out and enjoy these frogs and everything that they have to offer!