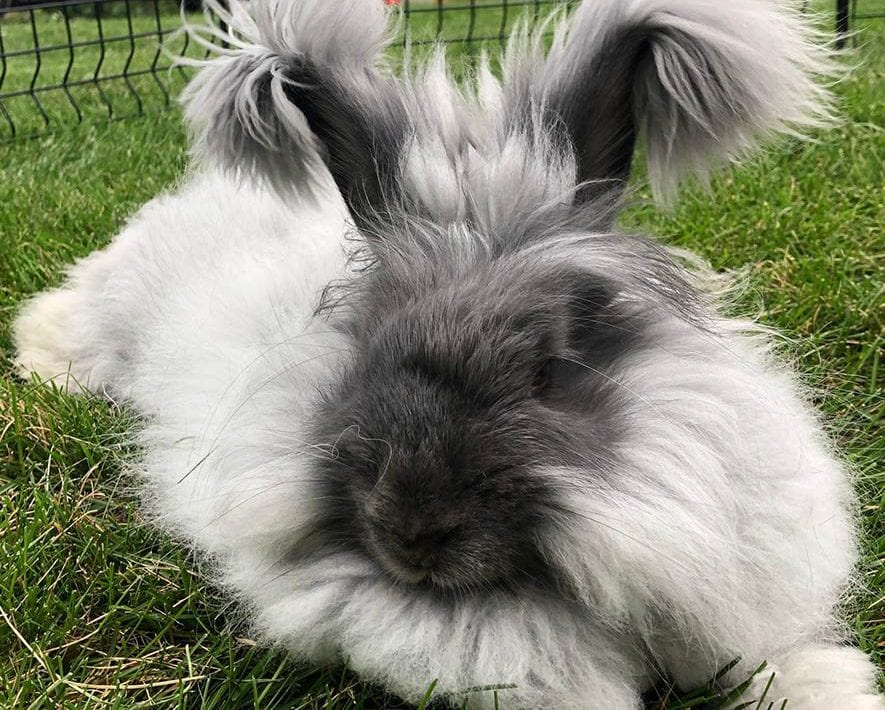 The German Angora rabbit is one of 11 breeds of long hair rabbit that you can keep as a pet or farm for its long fur called Angora Wool. They shear the animals so it doesn’t hurt them to remove the wool, and it prevents the rabbits from ingesting the hair, which could cause blockages in their digestive system. Rabbit fur causes fewer allergic reactions than the hair on other animals, so it’s better tolerated as clothing and as a pet.

How Much Do German Angora Cost?

The German Angora rabbit will usually cost between $50 and $120, depending on where you get it. Pet stores tend to cost less, but the lineage is often obscured, and you probably won’t be able to find out the rabbit’s health history. A breeder will be more expensive, but they often run tests to ensure the rabbit is free from genetic defects and their skills help produce a healthier pet with a longer lifespan.

The German Angora is a loving animal that is very docile and enjoys lounging around. They enjoy staying indoors or outdoors and like to play with their owners. Children will love their extra fluffy fur, and it doesn’t mind if you carry it around as long as you handle it gently. You can also pet them without fear of being bitten, intelligent enough to learn to use a litter box, and will come when you call them.

The German Angora is a large rabbit with plenty of hair. It can typically weigh between 5 and 12 pounds but usually stays closer to 6 or 7 pounds, especially if you don’t overfeed it. The white albino coat is the most popular, but you can find them in several monochromatic colors as well, including brown and black. There is also a variety with the tortoiseshell pattern of colors and others with agouti and chinchilla markings.

How to Take Care of German Angora Rabbits

Your German Angora will not get baths unless it gets itself into something that requires it, and baths can scare the rabbit, so you should not attempt it unless necessary.

The German Angora is a fairly large rabbit, so it will need a big cage whether you keep it indoors or outside. Most experts recommend a cage size of 36-inches wide by 30-inches deep and 24-inches high to provide your rabbit with enough space to move around. It will also need several hours outside the cage each day to get the activity it needs to stay healthy and avoid becoming overweight.

Nest boxes are especially important if your German Angora will be raising litters. It needs to be big enough that your rabbit can get in and build an adequate nest. Most experts recommend the nest box be at least 12-inches long by 18-inches wide and 8-inches deep for best results.

The type of food dish you use isn’t important, but it should be easy to clean and have no sharp edges. It will also need regular inspection to ensure it remains free of cracks, rust, and mold.

Most rabbit owners prefer to use a plastic or glass bottle with a drinking tube to hydrate their pets. This system prevents contaminants from getting into their water supply, but you will need to be careful if you use a plastic bottle to leak PCBs into the water. If using glass, you’ll need to make sure it doesn’t break.

Standard wood or paper bedding is perfect for your German Angora, and you should provide enough of it to create soft padding for their feet, but not so much that the rabbit kicks it out of the cage. You will also need to provide an endless supply of timothy hay that they can chew on.

Do German Angora Rabbits Get Along with Other Pets?

German Angora rabbits are quite large, so if you socialize them early, they can often get along well with many dog breeds and even most cats. However, you don’t want to put them in a situation where they need to run and hide constantly. Running can injure your German Angora. It can also trip on its fur and overheat from too much activity.

What to Feed Your German Angora

Besides plenty of timothy hay that you will need to provide your rabbit in unlimited supply, your German Angora will eat a wide range of fruits, vegetables, and pellets. Commercial rabbit pellets like Oxbow Essentials Rabbit Food will provide your pet with the properly balanced diet that it requires for long and healthy life.

The German Angora rabbit is a healthy breed that can live a long life of 7 to 12 years with few vet visits.

GI Stasis is a blockage in the German Angora’s intestines due to its ingesting its long hair as it grooms itself. This hair builds up in the system and can be life-threatening if you don’t catch it early. The best way to prevent GI Stasis is to keep the rabbit sheared every three months, so the hair doesn’t get too long.

Rabbits love to chew things, and your German Angora will be no different. It’s important that before you allow your rabbit to roam freely in your home, you rabbit-proof it by hiding or removing all wires and other things your rabbit might confuse with timothy hay. Wire chewing can be expensive, damages your equipment, might electrocute your rabbit, and could cause intestinal problems.

It’s very easy to make your German Angora fat by feeding it too many treats. If you like to reward your rabbit with treats or fruit, you will need to keep a close eye on their weight. Rabbits love to eat and will have no problem putting on several pounds, leading to several health problems, including diabetes, heart disease, and an increased risk of cancer.

Because the American Rabbit Breeders Association does not recognize the German Angora rabbit as a stand-alone breed, it’s a lot harder to find a breeder that creates them. The best chance of finding one is at a pet store where a fur farm might sell some of its surpluses or go directly to a fur farm where they might have one they are willing to sell.

Are German Angora Rabbits Suitable For You?

Yes, the German Angora rabbit makes a wonderful household pet. Its huge volume of hair will make it a big hit with the children and guests, and it requires very little maintenance to keep them looking great. They don’t shed, so you won’t see nearly as much fur on your clothes or furniture that you would with a dog or cat, and you’ll need to get them sheared so you’ll have your very own wool factory if you know how to use it to make fabric. It loves to play, isn’t afraid to let you pet it or carry it around, and it gets along pretty well with other animals. It will even come to you if you call it and will learn to use a litter box. What’s not to love?

We hope you have enjoyed reading over this short guide, and it has convinced you to give one of these unique pets a try in your home. If you found it informative, please share this guide to the German Angora rabbit on Facebook and Twitter.