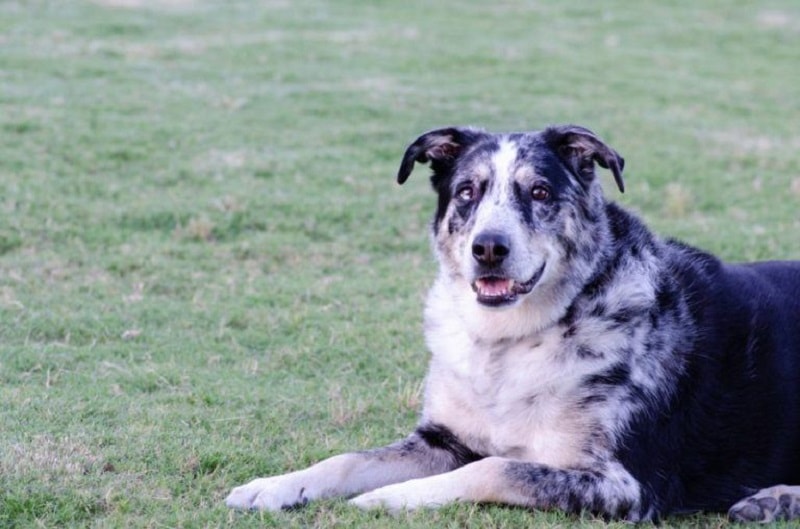 The German Australian Shepherd is a medium to large mixed breed the offspring of a German Shepherd and an Australian Shepherd. He has an expected life span of 13 to 15 years and is known for being very dedicated to his owner and family and very active. He is a herding dog so it is in his nature to be wary of strangers and protective of his home and family.

Where does the German Australian Shepherd come from?

Mixed dogs or hybrids are also called designer dogs and they are a popular trend right now. It is not known where or why the German Australian Shepherd was first deliberately bred. Care has to be taken with these mixed dogs as a lot of puppy mills and irresponsible breeders have jumped on the trend to breed puppies with no care about their welfare just as a means to make money. Since not a lot of known about this dog’s origins, you can look at the parents to see where it comes from. Keep in mind that while you can hope nature gives you a puppy with the best traits from both parents, you can also get puppies with a mix of the worst, or something in between.

You might understandably think this is a dog from Australia, but in fact, it is an American-born purebred, first developed as a farm and ranch dog to herd livestock. The Australian part comes from the fact the many Aussies worked on those ranches and likely used Australian dogs in the breeding like collies and shepherd-like dogs. In the 19th century, breeders wanted to create an intelligent, hard-working, and adaptable dog with excellent herding abilities. With the increased interest in Westerns and cowboys shows and rodeos, the breed also became more popular but was not recognized by the AKC until 1993.

Today the Australian Shepherd is still intelligent, energetic, protective, and dominant if you let him be. He, therefore, needs early socialization and training with a firm but fair handling. He is loyal but wary of strangers. He makes a great working dog still but is also a good family dog.

Now, this dog is from Germany as his name indicates, he was bred in the late 1800s by a German cavalry officer who thought he could create the best herding dog, one who would be highly skilled, clever, and athletic. While he was successful in creating such a dog, the need for herding dogs was on the decline so using his connections with the military and police he persuaded them to use his dog as a working dog. The German Shepherd was very good at this and was used in both World Wars as a messenger dog, red cross dog, search and rescue dog, to carry supplies, act as a sentry and guard dog. Rin Tin Tin a famous movie star who was also a German Shepherd.

Today the German Shepherd is still popular as a working dog but is also a great family dog. He needs a lot of mental and physical stimulation though otherwise he can get bored and become destructive. He is also not good at being left alone for long periods of time. He is reserved with strangers but with his family, he is loyal, affectionate, playful, easy-going, and protective. He is also very easy to train.

The German Australian Shepherd is a caring, dedicated family dog. He can be aloof or wary of strangers and is protective of his home and family. He is intelligent, brave, energetic, and alert. He is loving, loyal and enjoys having his people around him rather than being left alone.

He is a medium to large dog weighing 45 to 80 pounds and is between 20 to 25 inches tall. His head is well proportioned to the rest of his body with triangular ears that are set up high and have a rounded tip. The hairs on his head are short and smooth and he sometimes has a frill around the neck. He has muscular legs and shoulders, rounded feet and his soles are hard. He has a double coat, medium length and it can be straight or wavy. Common colors include blue, black, red, tan, brown, golden, pepper, brindle, spotted and speckled.

How active does the German Australian Shepherd need to be?

This dog enjoys an active lifestyle and is best suited to an owner or family who themselves enjoy being active, and can offer a house with a yard. Apartment living is not suitable for them. As well as physical activities such as long walks, ball play, fetch, jogging, hiking, and so on, he will also need mental challenges. Training will fill some of that need but also include some games that require him to think, and some toys. He will need at least an hour a day, ideally, 2 hours a day would be better.

He is a very easy dog to train, he is intelligent, keen to listen and obey, eager to please, and loves the mental challenges training can involve. He will likely need fewer repetitions and so will learn things quicker. He will need you to be firm and establish yourself as a pack leader but still use positive methods, praise good behavior, reward success with play, toys, or treats for example.

Living with a German Australian Shepherd

He does shed, and that shedding will increase with seasonal shedding. He will need regular brushing to keep up with the hairs and you will probably need to vacuum often. Use a slicker brush and make sure you move in the same direction as the hair growth. Bathing should be done just when needed as it can lead to skin irritation. Use a dog shampoo not your own. He is not suitable for people with allergies. Other needs will include trimming his nails if they get too long, brushing his teeth at least three times a week, and checking and cleaning his ears once a week. With his teeth use a brush and toothpaste for dogs.

If he is raised with children and he is socialized early and trained early he is good with them. This is also true of other pets. It will be protective of the children. Make sure they know how to play nicely with him, not to mess with his food when he is eating, not to poke or hurt him, or tug on his ears or tail.

They get along well with the kids provided they are socialized when young. As in the case of most herding dogs, they are reserved and unresponsive to strangers.

He is a very good watchdog and will certainly bark to alert you of an intruder. Other than that he is not a huge barker. He will also act to guard his family if they are being threatened. He will need 3 to 4 cups of high-quality dry dog food each day, split into 2 meals. He can live in colder climates but is not as adaptable to very hot ones.

Because designer dogs are fairly new specific health issues that they are prone to are not known yet. However, there is a chance they can inherit the conditions their parents are prone to which in this case includes Bloat, Degenerative Myelopathy, EPI, epilepsy, deafness, cancer, joint dysplasia, allergies, OCD, eye problems, hypothyroidism, and drug sensitivity.

Average puppy prices are $300 to $800 for German Australian Shepherds. They are affected by popularity, quality of the breeder, health, and age of the puppy, and availability. The puppy needs blood tests, shots, deworming, neutering, a leash and collar, and a crate. This will cost between $450 – $550. Recurring medical costs each year for further shots, checkups, flea and tick prevention, and pet insurance will fall between $485 to $600. Recurring non-medical costs each year for food, license, training, toys, and treats will fall between $500 to $600.

Looking for a German Australian Shepherd Puppy Name? Let select one from our list!

This is a very active dog and will need a family or owner who can give him those needs. He is not best suited for apartment living nor is he good for a first-time dog as he needs firm leadership. He will be devoted and loving and a great companion for anyone who can meet his needs.