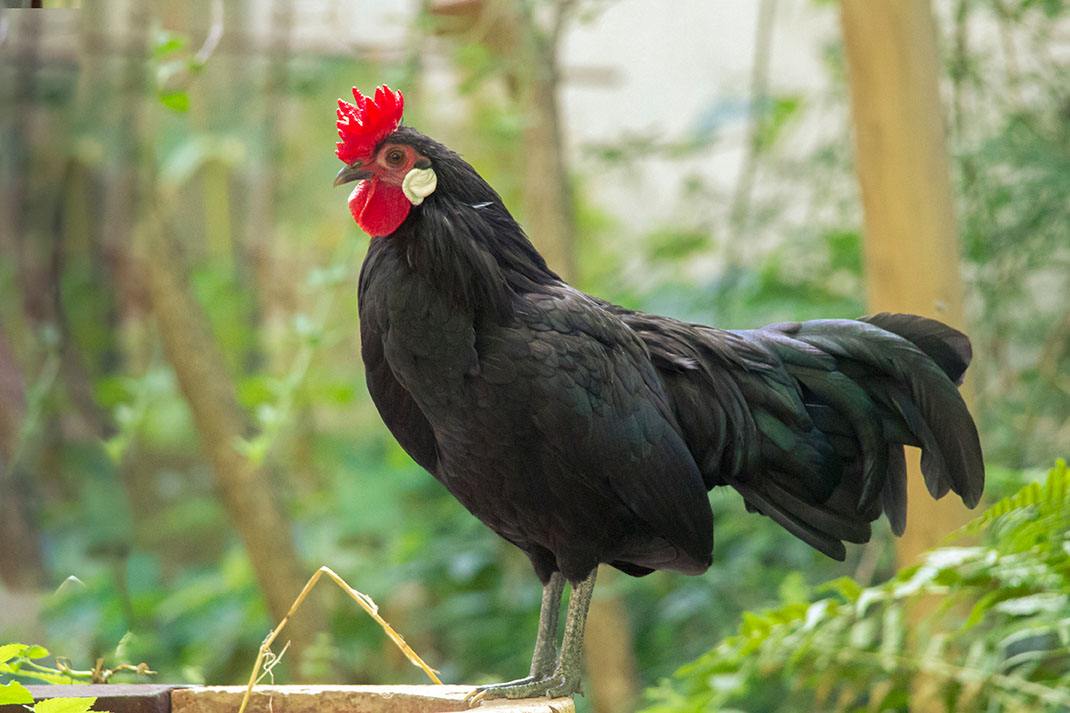 Germany has a booming market for chickens. Both poultry meat and eggs are considered staples in the country and have been for many years.

Chickens are first thought to have come to Europe’s shores by the Phoenicians in the 1st millennia B.C. They brought them up along the Mediterranean coasts and into Spain. From there, the ease of rearing chickens for food production became apparent, and they quickly spread across the rest of the continent.

Germany has had intensive breeding programs to enhance certain features of these first chickens for many years. As a result, the world now has Germany to thank for many unique chicken breeds. Some of them have not lasted through the ages, but those that have are popular because of their benefits for any poultry keeper. These include:

Our list features the chickens of German descent that are still around today. Here are the top 16 German chicken breeds, ranging from common backyard roosters to prized ornamental birds.

The Augsburger chicken is currently regarded as an endangered breed of domesticated chicken. As their name suggests, chicken breeders first developed them in Augsburg in the south of Germany.

The first records of these chickens are from the early 19th century, and it seems that they came from the French breed, La Fleche. The Augsburger is a beautiful chicken with deep black plumage with greenish lights. They have an unusual rose-comb and are the only German chicken to have been developed in the region of Bavaria.

The Bergishce Kräher can come in a standard size or a bantam version. They originated from the Bergishches Land in Germany. The name comes from the rooster’s unusually long crow, which can last up to five times as long as other breeds. They have beautiful plumage of gold-laced black.

These birds have a single comb, white earlobes, and blue legs. They are a dual-purpose breed, but they lay a less than average number of eggs and having a tendency toward broodiness.

The Bergische Schlotterkamm is a species from the Bergishches land. It is one of the oldest German chickens and one of their endangered breeds. There are standard and bantam versions of these chickens. The standard is considered a medium-sized chicken with a single red comb that flops to the side. There are four accepted plumage colors, including Cuckoo, Gold-laced Black, Black, and Silver-laced Black.

The Bergische Schlotterkamm is a dual-purpose bird. On average, the hens lay about 150 eggs each year, with a small tendency toward broodiness.

The Bielefelder, or Bielefelder Kennhuhn, is one of the more common breeds of domesticated chicken. Gerd Roth initially developed them in the 1970s by crossing Malines and Welsumer chickens with the Plymouth Barred Rock from America. There are standard and bantam versions of this chicken.

The Bielefelder is a dual-purpose bird produced for both their meat and eggs. These hens produce average 230 large eggs a year, weighing about 60 grams.

The German Langshan originates via the Croad Langshan, a heavy chicken breed that likely originated in China. These birds first came to Europe in 1969 and were then crossed with the Minorca and Plymouth Rock to create the German Langshan. These chickens are also dual-purpose but are primarily bred for their meat because of how heavy they are. Roosters can weigh up to 10 pounds. They have a single comb and their legs are bare and blue.

The Leghorn chicken, or the Livorno, first originated in Tuscany, Italy. The German Leghorn was further developed after being exported in the 1800s to other countries. They are primarily used for their egg-laying because the hens can be incredibly prolific. They lay white eggs, averaging 280 per year. However, certain hens have been known to reach upward of 320 eggs a year, weighing about 55 grams.

The Italian Leghorn is the most popular variety, but the German Leghorn has been bred to increase their weight to become a dual-purpose chicken.

The Lohmann Brown chicken was one of the first commercial chickens because they are a highly adaptable breed with high production efficiency and egg quality. They also start producing eggs far earlier than other hens, typically around week 14.

Lohmann Brown chickens are relatively plain with orange-brown plumage and a medium build. They are incredibly hardy, friendly, and less flighty than other high-output egg layers, like Leghorn chickens.

The Kraienkopp chicken was developed in the border area between the Netherlands and Germany. They are medium to large chickens with a rare soft plumage that sets them apart as show birds. The Kraienkopp breed was created by crossing Malays with Silver Duckwing Leghorn chickens. They were shown in the Netherlands first in 1920 and then in Germany in 1925.

The Kraienkopp is quite rare today because they are primarily known as show birds and are not particularly useful. The hens lay off-white eggs and are quite broody with them.

The Krüper, or German Creeper in English, is one of the original European creeper chickens. There are standard-sized and bantam varieties of this chicken. The breed is quite old and was first developed in western Germany. They were described in 1555 in “Avium Natura” and are a bird from the modern Bergisches Land.

The most noticeable feature of the German Creeper is their short legs. They typically only grow 7 to 10 cm long from the ground to the body. These chickens lay about 180 white-colored eggs each year.

The Lakenvelder breed is a domestic chicken that is currently classed as an endangered breed. They were developed both in Germany and nearby regions in the Netherlands. The breed is quite old and their origins are unclear. They were first recorded in 1727. They have a typical appearance, with solid black head, neck, tail, and wing primaries. The rest of them is a whitish color with blue eggs.

The Lakenvelder is known mostly for their egg-laying. Since they are no longer one of the best layers, they have fallen in popularity. They lay about 160 white eggs each year, each one weighing up to 50 grams.

The Ostfriesische Möwe is one of the traditional domesticated chickens derived from Northern German. They are also common in the Netherlands. These birds are quite a rare breed, with only 130 breeders recorded in 2016 and about 1,000 birds between them all.

These birds are beautiful. They have gold-penciled and silver-penciled varieties, and the bantam version is often gold-penciled. They are relatively small as well, with the cocks only weighing about 6.5 kilograms. The hens lay approximately 170 eggs each year, averaging 55 grams each.

The Phoenix chicken is one of Germany’s show breeds. They are a long-tailed chicken, seemingly walking around with flowing black robes following a flame-colored body.

The Phoenix was initially bred by crossing a Japanese long-tailed chicken, similar to their Onagadori species, with German breeds, so both countries are often credited for their development.

The Frizzle chicken breed looks how they sound. They have curled or frizzled plumage all over their bodies. The United States does not recognize them as a breed because several other breeds can carry this unusual gene for curly plumage. There is not much known about these chickens, although the idea is that the gene was first bred in Asia and later developed in Germany. They are purely used as exhibition chickens.

The Vorwerk, or Vorwerkhuhm, is both a standard-sized chicken and a bantam. They are unrelated to the German Vorwerk company that producers vacuum cleaners. The chicken is one of the rare breeds of golden plumage with a black head and tail feathers.

They are no longer common but were when Oskar Vorwerk bred them in 1900. These birds might also be known as the Golden Lakenvelder because they were first bred with Lakenvelder chickens. They are dual-purpose chickens. The hens produce about 170 eggs each year, and the roosters can weigh up to 8 pounds.

The Totleger chicken is an old domesticated chicken that is currently endangered. They were developed more than 400 years ago in Westphalia and are closely related to the Ostfriesische Möwe chickens. The chicken’s name comes from the original name of Alltagsleger, meaning every-day layer, since the hens are so prolific. Due to Low German influence, the term developed into “Totleger,” loosely translating to “lays eggs until death.” The Totleger comes in two beautiful plumage patterns, including gold-penciled and silver-penciled.

The Yokohama has a deceiving name, making it sound like its country of origin is Japan. In reality, this fancy chicken breed comes from Germany and is known for their unique coloring and long tail-feathers.

Hugo du Roi developed them in the 1880s from ornamentals in Europe and then supplemented them with Japanese fancy chickens in the latter half of the 1950s. Some of these Japanese birds were shipped from Yokohama, and the name for the German versions stuck. The hens only lay about 80 small eggs each year, so these birds are primarily kept for showing purposes.