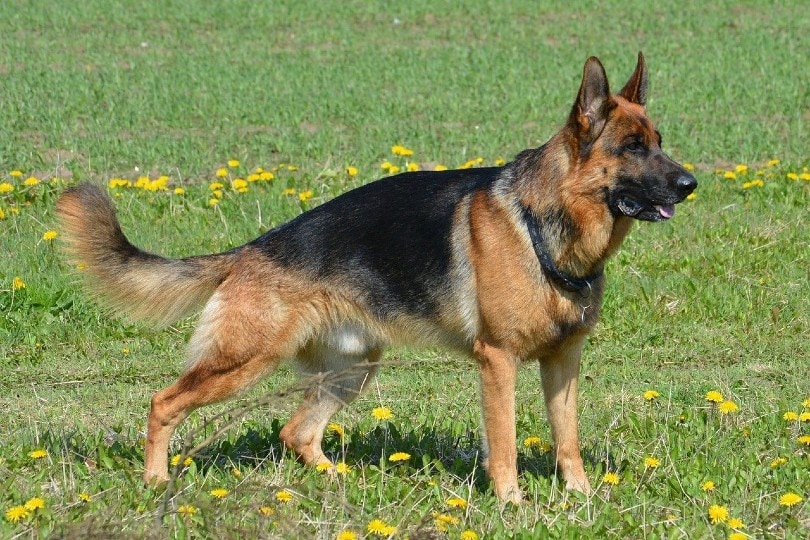 Germans have a reputation for being great at what they do. You will be hard-pressed to find a subpar German product. Therefore, it does not come as a surprise that German dog breeds are among the most popular canines in the world.

If you can’t resist the German charm, you will be spoilt for choice. There are nearly 50 different dog breeds that originate from the country. While there is no denying that they are all great dogs, not every canine will work well for you.

Before adopting any dog, it is crucial to familiarize yourself with the breed first, as that will allow you to know what to expect from them. It is no secret that different breeds have different needs.

The following are 20 of the most popular German dog breeds and what to expect from them.

First up is Germany’s national dog, the Great Dane. This breed boasts one of the most impressive resumes of any canine. It was bred to hunt wild boar. If you know anything about boars, you know how nasty and dangerous they are. As such, traits like gameness and endurance were focal points when designing the Great Dane.

The result was one of the most proficient hunting dogs the world had ever seen. This breed was so successful that it was proclaimed Germany’s national dog in 1876.

Nevertheless, as more and more people started adopting the Great Dane for companionship, breeders had to make it more family-friendly. Therefore, while the current Great Danes are still magnificent physical specimens, they are a far cry from the great hunters of old.

Today’s Great Dane is an intelligent, observant, and docile dog. It is loyal to its family but tends to be devoted to one person.

Everyone and their cat knows about the German Shepherd (GSD). This breed is the embodiment of Germany’s core values—intelligence and a stellar work ethic—that allow it to excel in just about any field. Therefore, it is of little surprise that the German Shepherd is consistently ranked in the top three dogs on the planet.

However, a lesser-known fact about this breed is that it comes in two different lines: show lines and working lines.

Did you know that the Poodle is of German descent? Poodles are wildly popular for several reasons. In addition to being fluffy balls of cuteness, they are among the most intelligent dogs in the world, making them remarkably easy to train.

Additionally, they are an excellent fit for allergy-sensitive people, as they are a hypoallergenic breed. What’s more, they are affectionate, playful, and get along with other pets.

With a name that translates literally to “monkey dog,” the Affenpinscher is everything but boring. This mustached little devil is charming, mischievous, loyal, and affectionate.

Believe it or not, the Affenpinscher was bred to be a working dog, specifically a ratter on farms and in kitchens. As you can imagine, it did not take long for this goofball to win over the hearts of people across Germany, upon which it was promoted to companion dog status.

Nevertheless, the Affenpinscher is still a terrier at heart, meaning it has a high prey drive. As such, it would be wise not to keep it around small pet rodents.

Dobermans are considered some of the most vicious dog breeds in the world, and for a good reason, they can be.

This breed was named after its founder, Louis Doberman, a tax collector. Understandably, the nature of his profession called for ingenious methods of persuasion. Louis chose a straightforward method; having a terrifying canine companion with him during his rounds. Needless to say, his plan worked quite well, as Dobermans remain arguably the best guard dogs to date.

This canine is intelligent, bold, and assertive. Therefore, it requires a confident, firm handler; otherwise, it will walk all over you.

Speaking of terrifying dog breeds, few breeds can claim to have the ability to induce the fear of God into a person the way an unhinged Rottie does. Everything about a Rottweiler screams, “keep your distance,” and understandably so since these dogs were bred to guard farmers, shepherds, and merchants during their trips to the market.

It is widely believed that Rottweilers are descendants of the mighty Molossus, a war dog used by both the Ancient Romans and Ancient Greeks.

Like the Doberman, Rottweilers are incredibly headstrong. As a result, they are not ideal for first-time dog owners.

The Pomeranian is about as cute and cuddly as a dog can get. Pomeranians are also incredibly charming. Interestingly, Pomeranians are not adorable and charming by accident; they were designed to be so, as their sole purpose is to offer companionship.

Therefore, if you do adopt a Pomeranian, be ready to give this pup your undivided attention and affection.

Boxers are on the cusp of becoming the most popular dog in the world. They are intelligent, athletic, energetic, and loyal. Additionally, they are sweet and playful with their owners and get along very well with children and other pets.

However, what makes the 80-pound muscle-bound Boxer the ultimate companion is its strong protective instincts. It can go from cuddly pet to vicious protector in seconds.

During the late 19th century, there was a need for a multitasking field dog that could point, trail, and hunt small and large game across all types of terrains. That vision led to the development of the GSP—German Shorthaired Pointer.

The GSP is a natural-born killer and is a great hunting dog. Nevertheless, despite its innate gift for hunting, the GSP is tremendously sweet and loving. Since it was bred to be a field dog, it requires lots of exercise and enrichment activities to lead a happy life.

The name Dachshund is German for “badger hunter.” As you can imagine, this tiny but feisty dog must have excelled at its purpose to earn its name.

Dachshunds were bred around the 17th century to tunnel into badger dens and force their prey out, hence their disproportionately short legs and long bodies. Additionally, a distinct, hearty bark was favored in the breeding process to alert their partner aboveground of their find.

This canine was introduced to the United States at the end of the 19th century, where it came to be affectionately known as the “wiener dog.”

Even though Dachshunds come with spunky attitudes, they are extremely loving and loyal to their family. They are also quite energetic, meaning you will need to exercise them thoroughly to prevent destructive behaviors. They are one of the most desired dog breeds in the United States because they live for as long as 16 years.

The majestic Leonberger is one of those breeds that turns heads everywhere it goes. Weighing up to 170 pounds, it is one of the largest dog breeds in the world. This giant canine was bred to be a working dog, pulling carts and various jobs on farms and waterfronts.

However, the Leonberger’s charm made it the ultimate companion for German royalty. Leonbergers are gentle giants with lots of love to share, and they cherish each moment shared with their loved ones.

Before you fly off the handle, the American Eskimo is not an American breed. This pup came to the United States in the early 19th century with German immigrants. While this fluffy white cutie’s rise to fame resulted from its acts in traveling circuses, it was originally bred to work in farms.

The American Eskimo’s exceptional intelligence makes this pup one of the easiest to train.

The Weimaraner is one of the most iconic dog breeds in Germany. This pooch was developed to be a hunting companion, especially in the pursuit of mountain lions and bears in 19th century Germany. Eventually, the fearless Weimaraner became one of the most prized tracking dogs in the world, with even former U.S. President Dwight Eisenhower adopting one and bringing it into the White House.

Weimaraners are intelligent, loyal, and need lots of exercise to be content.

While the Giant Schnauzer is a loyal and trainable dog, it does not do well in multi-pet households due to its need for independence.

German Spitz dogs are loyal and devoted companions, making them excellent fits for most families.

The Small Münsterländer is a highly intelligent animal renowned for its stubborn doggedness—it does not stop until it completes its task. These dogs also love water, which can be explained by their hunting and retrieving background.

As a result, the Small Münsterländer is a good fit for active individuals, as it needs to be in the middle of the action to be happy and content.

Nevertheless, they are a fun-loving breed and make excellent companions.

The Lowchen has a long and storied history that dates as far back as the 15th century. This canine was bred to be a companion dog for aristocrats. Even today, the Lowchen remains a breed for the wealthy, as it is one of the most expensive dogs in the world due to its rarity.

As you can tell from its name, this breed is the large version of the Small Münsterländer. The Large Münsterländer was bred to be a gun dog, explaining its exceptionally high endurance levels and a desire to spend time outside. This breed is a good fit for adventurers and explorers.

The Eurasier is a relatively new breed that came about from crossbreeding the Samoyed, Wolfspitz, and Chow Chow. This fluffy, medium-sized dog is well-balanced, intelligent, friendly, obedient, quiet, and alert. However, the Eurasier tends to be an independent thinker.

While the Eurasier gets along well with its family, it is rather aloof with strangers. Therefore, it requires lots of socialization to get along with everyone.

German dog breeds enjoy immense popularity because they are great at what they do. However, as mentioned, you should always do research first before adopting a dog. Start by identifying your needs, and then pick a breed designed to fulfill those needs.