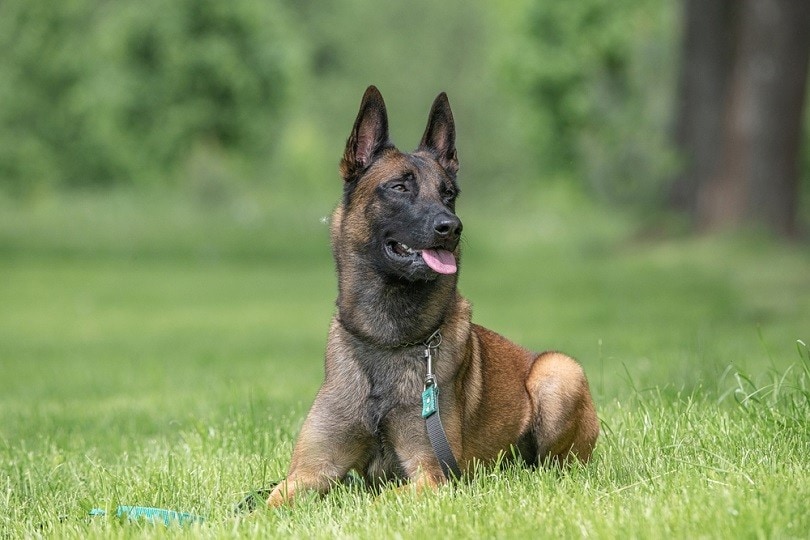 The German Malinois is a hybrid or mixed breed dog the offspring of a Belgian Malinois and a German Shepherd. She has a life expectancy of 10 to 14 years and is also known by the names Shepinois, Malinois X and a Belgian Shepherd Malinois. She is a large cross breed and while she is a great family dog she is also a great working dog used for police work, search and rescue, sports, personal protection and detection. She is commonly used by the Unites States Secret Service. She also participates in several activities including herding, agility and hunting.

Where does the German Malinois come from?

The German Malinois is part of the trend for designer dogs though where and when and by whom this dog was first deliberately bred is not known. Probably the hope was to get a dog who would be active, powerful and alert but also level headed and good as a working dog and as a family dog. With little specific details about the breeding we can look at the parent purebreds to get an idea of the potential of the offspring.

In Belgium in the late 1800s four kinds of Belgian Sheepdogs were bred, the Laekenois, the Groenendael, the Malinois and the Tervuren. The Malinois can be traced back to the 1880s and a Shepherd called Janssens and it was around 1898 that the name Malinois became associated with this dog. As well as being used as sheep dogs, and in sheep dog trials, they were also used as draught dogs, guard dogs and police dogs. In the early 20th century he was exported to other countries including America. After World War I many were brought back by servicemen. Recently there has been an increase again in importation because of their success in the military, search and rescue, police and drug detection.

Today the Malinois is not just an outstanding working dog. He is affectionate when part of a family though he is more reserved with strangers. He has a lot of energy and needs room to move around. He is clever, protective, focused on his people, sensitive and intense.

The German Shepherd was bred to be a great herder, one who would be skilled, intelligent, agile and athletic. However this was in the late 1800s, early 1900s and in fact the need for herding dogs was on the decline. His breeder, a captain of the German cavalry used his connections to get the dog into working fields in the police and the military where he proved to be extremely capable and popular. He worked in both World Wars as a messenger, guard, watch dog, rescuer, supply carrier and so on. Allies were impressed and took some back with them where they became popular in America, with Rin Tin Tin a movie star being one of them. In Germany there was a strict control on breeding to keep them as working dogs, but in America they began to breed for looks over ability. Thankfully now many breeders have moved back to breeding able dogs.

Today the German Shepherd is aloof with strangers but once he knows you he is affectionate and loyal. He will be protective and alert and he is very intelligent. He can be trained to do a lot of different things but he is not good at being alone and suffer from separation anxiety. He also needs a lot of exercise and stimulation to prevent boredom leading to destructive behavior.

The German Malinois is an energetic and hard working dog. She is loyal, alert, friendly, affectionate with the family and very intelligent. She is great as a working dog but she is also a good family dog. She needs a firm owner and one who is experienced with handling dogs. She is fairly level headed, protective and devoted. She likes to be at center of activity and attention and thrives in an active household. She can be demanding and will not let you ignore her!

She is a large dog weighing 65 to 85 pounds and measuring 20 to 26 inches tall. She has a flat skull that is in proportion to the rest of her. Her eyes are deep set and shaped like an almond and her ears point up erect. Her muzzle is usually on the long side with a black nose and she has a sturdy athletic body that is a little more compact than a German Shepherd’s. Her coat is coarse, double layered, harsh and rough, and short to long. Colors include fawn, blue, black, brown, white and tan.

How active does the German Malinois need to be?

She is a very active dog, she needs not just a lot of physical opportunities but also mental stimulation too. She is better in a house with a yard for that reason. She would love to join you when you go for a jog or walk, she would do best with a couple of long walks along with some play time and mental stimulation.

She is very intelligent, very trainable, eager and will need fewer repetition so will learn quicker. She needs to be trained by someone who can be firm as she can try to be the dominant one, but still be positive as she is also sensitive. Early socialization and training are a great way to get a well rounded dog. Make sure when training your timing is right as she is very quick. She is also good at reading your facial cues and body language so you have to stay ahead of her.

Living with a German Malinois

She does shed and there is seasonal shedding too where it will get worse a few times a year. You will need to clean up after her and brush her daily with a firm bristle brush to stay ahead of the hairs and give her coat a shine. Avoid bathing too often as it will strip the coat of essential oils. Just bathe her when she gets really dirty. She will need her nails clipped if she does not wear them down naturally, her teeth brushed ideally once a day or at least three times a week, and her ears checked and cleaned, staying just with the parts you can see, do not insert anything into her ear.

She does need early socialization and training to be at her best around children, other dogs and pets. She will play with children and be protective of them. Teach the children not to hurt her by pulling on her ears or tail. With other dogs she can be territorial and with other pets she can see them as prey to be chased. This gets better if she has been raised with them.

She is a good watchdog and will bark to alert you of a stranger in the house. She will need 3 to 4 cups of high quality dry dog food a day divided into two meals. She is better in colder climates than really hot ones.

To avoid getting a puppy or dog with health issues buy from places that are reputable, that care about the puppy and its health. Ask to see health clearances for the parents as the offspring does have the potential to inherit the parent’s health issues. For the German Malinois these issues would include Bloat, Degenerative Myelopathy, EPI, PRA, Anesthesia Sensitivity, Joint dysplasia and allergies.

A puppy will cost between $500 to $2000, some sellers will include certain things with their price like starting shots, deworming, micro chipping. Otherwise that is another cost you have to cover. She will also need spaying, a collar and leash and a crate. These initial costs are around $450 to $500. Ongoing medical costs per year for check ups, shots, flea prevention, pet insurance are $485 to $600. Ongoing non-medical costs per year for long hair grooming, food, license, training, toys and treats are $920 – $1050.

Looking for a German Malinois Puppy Name? Let select one from our list!

These dogs are very active and smart and are not the best dogs for first time owners because they need a firm hand and can be sensitive. They really need an owner who gives them plenty of mental and physical stimulation otherwise she can be destructive. But she is a loyal and affectionate dog in the right home.