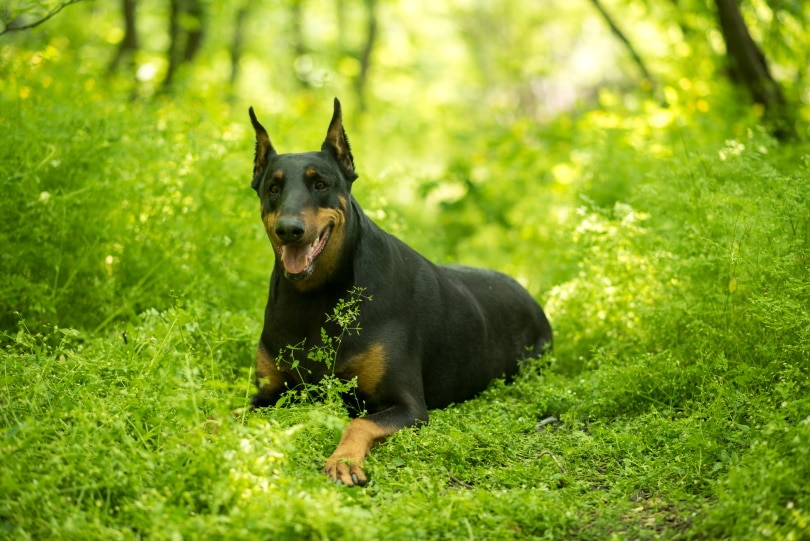 The Doberman Shepherd is a cross between two of the most formidable guard dogs in the world, the German Shepherd and Doberman Pinscher. As you’d expect, Doberman Shepherds are large, powerful animals that have a ton of energy and need an owner who can provide them with a significant amount of daily exercise and a firm, confident hand in training.

With their German Shepherd heritage, these dogs are highly intelligent animals that can be easy to train for experienced owners, but their smarts can also be an issue if they don’t have enough discipline. They can also be stubborn at times, so these dogs are not ideal for novice owners.

If you have been thinking about bringing home a Doberman Shepherd, you’ve come to the right place! In this article, we look at the temperament and recommended training and care of these powerful pooches to help you decide if it’s the breed for you.

Doberman Shepherd Puppies — Before You Buy

These dogs are powerful, intelligent, and energetic, so before bringing home one of these pooches, it’s important to understand the amount of dedication and commitment that you’ll be in for. That said, they are exceedingly loyal and highly intelligent and make one of the most loyal family protectors around. They are also versatile and make a great exercise companion too, giving you a dog that can do it all!

Doberman Shepherds are not expensive dogs, and you can pick up a puppy from a reputable breeder for $200-$500. This price can be affected by several factors, including availability, location, and the breeder that you choose. Also, females are more sought after and thus, usually go for a slightly higher price. If you see a Doberman Shepherd for under $200, they have likely come from a puppy mill, and you should not buy them because they may not be healthy, and this is an industry that you do not want to support.

You’ll also need to budget for other initial costs, including vet bills, vaccinations, spaying and neutering, and accessories. Add another $500 or so to your budget just to be safe.

3 Little-Known Facts About the Doberman Shepherd

1. German Shepherds are one of the most popular dog breeds in the world

The German Shepherd is one of the most popular dog breeds in the world and the second most popular in the United States. This is primarily because they are so versatile and are commonly used as service dogs, guard dogs, and police and military dogs. They make wonderful family dogs too.

2. They are highly intelligent

Not only are German Shepherds highly popular, but they are also intelligent. German Shepherds have been ranked as the third most intelligent dog breed in the world, behind only the Border Collie and Poodle. Doberman Pinschers are no slouch either and come in at number five in intelligence rankings. With parents like this, you can be sure your Doberman Shepherd will be super smart too!

3. Dobermans and German Shepherds are a relatively new breed

Compared with many other breeds that we know and love, both Dobermans and German Shepherds are a relatively new breed, and both originated sometime in the early 1880s. For comparison, one of America’s other most beloved breeds, the Siberian Husky, originated centuries ago.

Temperament & Intelligence of the Doberman Shepherd

With both parent breeds being exceedingly loyal, protective, and athletic, it may come as no surprise that the Doberman Shepherd is all of these and more. They are stubborn and strong-willed at times but make up for this with their love and affection toward their owners. With the right training and socialization, their more negative traits can be largely mitigated. They become extremely bonded to their human family, so while they are bold and brave on the outside, they are actually highly sensitive and suffer from separation anxiety when left alone. If you are away from home frequently, this is unfortunately not the breed for you.

These dogs are just as energetic and athletic as their parent breeds, if not more so, and they can be a challenge to properly exercise. It is essential to give these dogs the right amount of exercise, though, as without it, they can swiftly become bored, destructive, and even aggressive. Proper training is arguably even more important, and these dogs need a strong, confidant leader; otherwise, they will take the position themselves!

Doberman Shepherds can make great family dogs, provided that they are trained and socialized properly, but they can be a bit boisterous and energetic around small children. They are generally gentle and affectionate with kids but can easily knock them over and hurt them mistakenly while playing. For families with older kids, though, they are wonderful family dogs, as they are loyal as they come and formidable protectors.

Doberman Shepherds generally get along great with other dogs and are usually fine with cats too. While these dogs are fantastic guard dogs, they don’t have much of a prey instinct, so all the other animals in your home are generally safe with Doberman Shepherds — provided that they are properly socialized, of course.

Things to Know When Owning a Doberman Shepherd

With all their energy and their relatively large size, these dogs need a nutrient-dense diet packed with healthy, animal-based protein. Dry food is great, so long as it is free from filler ingredients and has animal protein in the top three ingredients — ideally, the first-listed one. They’ll need around 4-5 cups per day, split into two meals. They should not be free-fed because they are notoriously poor at self-regulating and can quickly get obese.

It’s a good idea to supplement their dry kibble with lean meat occasionally as a treat, as this will give them a boost of essential amino acids and provide them with variety. Also, as with any dog, make sure they have access to fresh, clean water at all times.

Doberman Shepherds are exceedingly energetic, so they need a great deal of daily exercise to keep them happy, healthy, and out of mischief. They’ll need at least 90-120 minutes of exercise per day split into two sessions, but more is better. These dogs make excellent cycling and running partners, and you’ll get tired long before they do! With all this energy, these dogs are not suited for apartment living, and they’ll ideally need a large spacious backyard to play in.

A post shared by L O K I (@loki.explores.earth)

Doberman Shepherds are extremely intelligent and usually take to training with ease. That said, they do have a stubborn streak that can be a challenge for novice owners. Early socialization is essential with Doberman Shepherds and will make training far easier because they will be far less distracted by other dogs and humans when you take them out for walks. While these dogs are intimidating and powerful animals, they are fairly sensitive and do not respond well to harsh training methods, and this may even cause aggressive behavior. Gentle, reward-based methods are best and will build a wonderful relationship of trust and bonding with your pooch.

Doberman Shepherds have a short coat that is a breeze to groom. They shed little, so a brush once or twice a week will remove any dead hair and help spread their coat’s natural oils.  Other than that, you may need to trim their nails occasionally to prevent injuries, and keep their teeth brushed and clean to avoid dental disease.

Doberman Shepherds benefit from hybrid vigor, the result of mixing two purebred dogs, and thus, they are hardy, healthy animals overall. That said, they may still be susceptible to the genetic issues of their parent breeds and can be prone to issues that affect most other dog breeds too. Because these dogs are so large and athletic, the most common issues are with their joints, so hip and elbow dysplasia are something that you’ll want to keep a close eye out for.

These dogs love to eat and are not good at self-regulating their food intake. This can swiftly lead to obesity if they are overfed, but their daily meals should also be split into two to three smaller meals to prevent them from eating too fast. Large dogs that eat their food too quickly are prone to gastric torsion, a condition resulting from swallowing too much air with food. This condition is unfortunately fatal in most cases.

The last decision that you’ll need to make if you’ve decided to bring home a Doberman Shepherd is whether to get a male for a female. There are few differences between the two, although males may be slightly larger and heavier, and because they mature slower, they can be slightly more challenging to train.

Both males’ and females’ personalities are far more affected by their upbringing than their sex, though, and with spaying and neutering, there is little difference between the two.

The Doberman Shepherd is a large, powerful, and intimidating dog and arguably one of the best guard dogs and protection animals around. Even with this power, they are sensitive animals that can make great family dogs that will defend their owners with their lives. They can be a challenge for inexperienced owners, though, as they are strong-willed and need a strong, confident leader in training. They become attached to their owners and suffer from separation anxiety when left alone, making them less than ideal for owners who are away from home for extended periods. Doberman Shepherds are large dogs that need a large spacious backyard to play in and are not suited to apartment living.

If you’re looking for a large and intimidating yet loyal and affectionate family protector, the Doberman Shepherd is the result of crossing two of the most infamous guard dogs in the world, so they are a perfect choice!