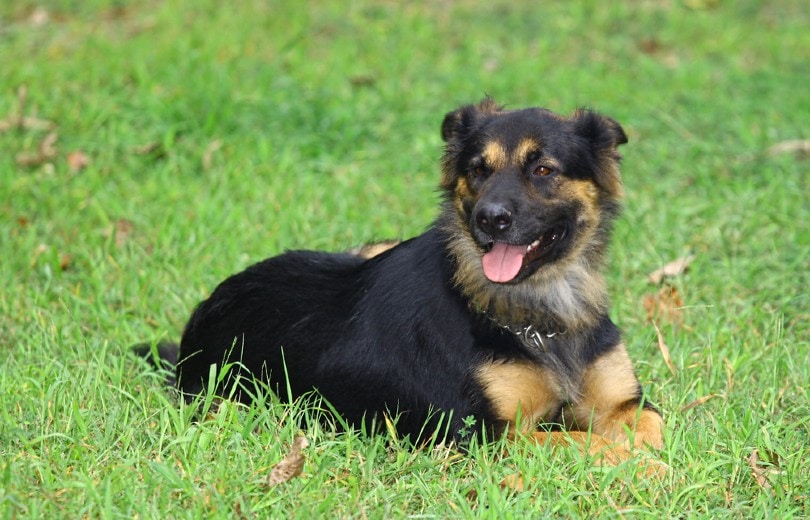 The German Shepherd Rottweiler mix is a hybrid dog crossing the German Shepherd and the Rottweiler. He has a life expectancy of 10 to 13 years and is a dog commonly sought after and used for protection and guard work. Some feel this is an aggressive mix but as with all dogs if properly trained this mixed breed can be a good companion dog too.

Where does the German Shepherd Rottweiler Mix come from?

The German Shepherd Rottweiler Mix is a designer dog or mixed breed that has little known about why it was first bred and by whom. There are a lot of mixed breeds being bred now, it became popular mostly in America though that spread quite quickly for the last two decades or so. Some are bred with thought and responsibility and some are not. Be ware those puppy mills and disreputable breeders who are just trying to make money from this trend. Without specifics on his breeding we have to look to the German Shepherd and the Rottweiler to learn more about their offspring.

In the late 19th and early 20th century a German cavalry officer called von Stephanitz wanted to breed a superior herding dog, one with intelligence, ability and athleticism. While he succeeded with the German Shepherd it was at a time when demand for herding dogs was actually on the decline. Determined his breed would still be a successful and in demand working dog, Stephanitz used his connections to get the military and police to try the dog out. He was a complete success and he still is.

Today he is used as a working dog in many different areas. He is intelligent and easy to train, loyal to his owner and protective. He is not just a success as a working dog, he makes a great family dog too as long as you can give him the activity and mental stimulation he needs. He does not like being left alone for long periods and can suffer from separation anxiety. While he is wary around strangers he is affectionate and playful with his family.

The German Shepherd Rottweiler Mix is full of energy, intelligent and powerful. He needs to be active and tends to be protective of his family. While he is wary of people he does not know he is not aggressive. He is very loyal and tends to form very close bonds. He is not aggressive if properly socialized and trained unless there is a threat to his home or family.

What does a German Shepherd Rottweiler Mix look like

This is a large to giant mixed breed weighing 77 to 115 pounds and being between 22 and 27 inches tall. He looks strong and powerful and can range quite a bit in which sire or dame he takes after in terms of face and other physical traits. For example German Shepherds have a saddle back look but the German Shepherd Rottweiler Mix may or may not. His coat can be short, coarse, dense, harsh, straight and thick. Common colors include black, brown and fawn.

How active does the German Shepherd Rottweiler Mix need to be?

He needs a fair amount of exercise a day, at least an hour which should cover a long walk or two plus some play time. He should have both physical and mental stimulation to keep him happy and healthy and better behaved. Running, jogging, hiking, playing at a dog park, cycling, playing in the yard are all good things to do. He is not really suitable for an apartment due to his size and need for the outdoors.

If you have experience with training using firmness, consistency and positive techniques he should train fairly easily as he is intelligent and he enjoys a challenge and the interaction. If you do not have experience then training him may be hard as he can be stubborn and his size means if he decides he is not going to listen to you, and you do not know how to properly deal with that, he is going to get his own way and learn quickly that you are not a strong pack leader. With this breed though it is important to socialize and train early to bring out the best in him.

He does shed but how bad it is depends on which parent he leans more towards. Rottweilers do not shed as much where as German Shepherds shed regularly and even worse during shedding season. Be prepared you may have to clear up the loose hair and brush him once a day to get out the loose hairs. Bathing during high shedding periods could be done once a week with a doggy shampoo to help with the hair, otherwise bathing should just be done when he needs it. You also need to brush his teeth at least three times a week, trim his nails if they get too long or have a groomer do it for you, and check and wipe his ears once a week.

With early socialization and training and when raised with children he is very good with them. He will also get along better with other pets and dogs. His size may mean smaller children should be supervised. Also teach the children not to try and take his food from him, not to tease or hurt him.

He is a great watchdog and will bark to let you know if someone has broken into the home. He will also act to protect the family if they are threatened. He is otherwise an occasional barker unless the German Shepherd side is stronger then it will be more often. He does better in colder climates than warm ones and will need to be fed 3 to 4 1/2 cups of good quality dry dog food each day split into two meals or more. He is prone to obesity of his food is not watched.

To avoid getting a puppy or dog that has a lot of health problems buy from a reputable breeder who will show you health clearances. Health issues that are a potential for him as the two parent breeds are more at risk to them include Heart problems, cancer, bloat, pano, hypothyroidism, Degenerative myelopathy, EPI, Joint dysplasia and allergies.

Price of puppies can alter at any time depending on whether they are the trendy pet to have, where you are and whom you buy from. $250 to $850 are the range of prices you are most likely to find at the moment. Initial costs for collar, leash and crate as well as medical procedures like blood tests, deworming, chipping, neutering and shots will be about $450 to $500. Each year costs that are non medical like treats, training, food, a license and toys will be between $510 to $600. Costs that medical for check ups, vaccinations, flea prevention and emergency medical care savings will be between $485 to $600.

Looking for a German Shepherd Rottweiler Mix Puppy Name? Let select one from our list!

This is not a dog for new owners, he needs you to be a firm pack leader. It is also not a dog for people who do not enjoy being active. But if you have the time and spaces for him and know how to bring out the best in him he will be a great companion to stand at your side.