18 Things to Know Before Getting a Weasel as Pet 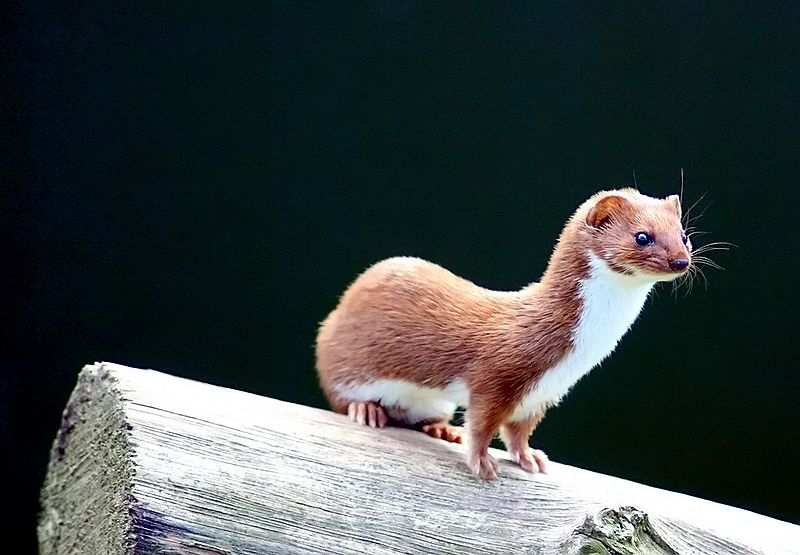 If you are thinking of getting a weasel as a family pet, or you know someone who is, there are quite a few things you should think about before putting down money to purchase one. If you have found one in the wild and are considering keeping it as a pet, you probably have many questions concerning its safety.

We’ve searched the internet and other resources to compile a list of interesting facts about these animals, so you know what to expect.

1. Weasels and Ferrets are closely related

Weasels and ferrets belong to the same family called the Mustelidae and are distant cousins. The weasel has a smaller body and a longer tail than the ferret, but they have a similar appearance. Other animals in the Mustelidae family include the otter, mink, and polecat.

2. The weasel is tiny

At only 7 to 9-inches long, the weasel is the smallest carnivorous animal on Earth. Some varieties can weigh as little as one ounce, with almost all breeds weighing less than a pound.

3. A Weasel will attack much larger prey

The weasel may look sweet and friendly, but it is a fierce and courageous predator, often having no problems attacking prey ten times its size and will even try to take down small rabbits. However, their primary food is small rodents.

The weasel’s small high and high metabolism requires the weasel to hunt non-stop and eat 60% of their body weight each day to stay healthy. Hunting is such a big part of their lives that, unlike most animals, it will continue to hunt and kill even when it has just eaten and has plenty of food.

5. Weasels do a war dance

When a weasel corners its prey, it gets very excited and performs a war dance of victory before making the kill. You can witness the war-dance in other members of the Mustelidae family, particularly with the ferret.

The weasel has a scent gland very similar to the skunk, and it will use the gland to spray predators when it feels cornered. Unlike the skunk, however, it is quick to use the spray and could deploy it when there is no danger.

7. Some weasels species are nearing extinction

Most weasels are pests to humans and are not in any danger of becoming extinct. However, some species like the Japanese and Columbian weasel are declining in numbers and on a list of threatened and vulnerable animals.

Since weasels often attack much larger prey, they often need to store their food for later. A typical weasel cache can contain up to 50 carcasses of dead animals that they will eat later.

Most weasels have a brown coat with a white belly. In some cases, the fur will be all white, and if you look at it under ultra-violet light, it will shine with a purple hue.

Domesticated weasels free from the hunt can sleep excessively, often reaching up to 20-hours of sleep per day, which is even more than most cats. However, this extra rest can quickly lead to weight gain, so you will need to be careful feeding them.

11. Pet weasels are not suitable for all households

The weasel is a predatory hunter that will more than likely attack any small pets you have, like mice, birds, hamsters, rabbits, and even cats and small dogs, so it’s best to attempt to keep a weasel only if you have no other pets. It’s also a tiny animal that is easy to step on, which can cause it to bite.

12. Weasels pose no danger to humans

13. Pet Weasels do better in pairs

When keeping a weasel as a pet, it’s often a good idea to keep two of them so they can have a partner. It can be two of the same sex or opposite sex if you’ve had them neutered. Since they don’t get along with many household pets, a second weasel will provide them with the company they need.

Pet weasels enjoy being around humans and are also quite curious, so they will often be underfoot whenever you do something that makes any noise or causes a commotion. They are easy to step on or send flying by accident, which can cause them to become aggressive, though, so you will need to always keep a sharp eye on them.

15. Weasels are illegal in some areas

Weasels, ferrets, and the other Mustelidae members are all illegal to own in the states of California and Hawaii. While not illegal at the state level, some counties and cities may also have laws against owning a weasel a pet, so it’s best to check with your local authorities before you make a purchase.

The weasel has an extremely high energy level and requires several hours of activity per day. If you have one in your home, you will need to allow them free roam of your house to explore and run around. You will also need to play games as you might for a cat to encourage activity if your pet appears sluggish.

In the wild, weasels like to take over their prey’s nests, but they tend to collect things around the home to build one when they are pets. However, they will also chew the items they collect, including practically everything they can carry. They especially like plastic cups and other similar objects. They will even steal action figures and dolls from any children who have left them unattended.

Weasels clean themselves just like cats do, which also leads to hairballs like cats. Hairballs can cause uncontrollable vomiting and constipation. Vomiting can also tire the weasel out and cause it to become dehydrated.

While many people do own weasels, and they are not too difficult to get, they may not be as good a pet as their near relative, the ferret. Weasels are smaller and more violent, which means no other pets. They like to be underfoot, but stepping on them can cause them to bite, possibly injuring children. It’s also illegal in some places, and if it were to get away, it would become a danger to the local wildlife.

We hope you have enjoyed reading over our list of interesting facts and have learned something new about these tiny predators. If you think others would enjoy it, please share these 18 fascinating facts about the weasel on Facebook and Twitter.