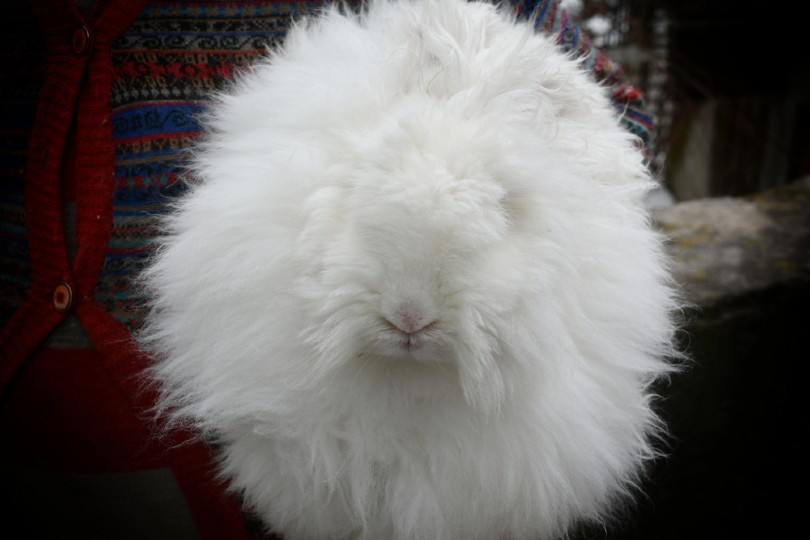 If you’ve been dreaming about adding a giant rabbit to your family, then the Giant Angora Rabbit could be the perfect choice! This breed is descended from the Angora, one of the oldest rabbit breeds in the world. The Giant Angora Rabbit breed was developed by crossing German Angoras with Flemish Giants and French Lops. In 1988, the breed was officially accepted into the American Rabbit Breeders Association (ARBA).

Giant Angora Rabbits need a large enclosure and plenty of free time outside to explore their surroundings. They can be kept as house rabbits too. Let’s find out everything you need to know about these giant, fluffy rabbits!

The Giant Angora Rabbit is descended from the smaller Angora Rabbit, one of the oldest breeds of rabbits in the world. Angora Rabbits come from Ankara in Turkey, and the breed was brought to France in 1723. They then gained international popularity, in part for their wool, which can be used commercially.

They were developed by Louise Walsh of Taunton in Massachusetts. Her goal was to create a larger Angora that could be used as a commercial producer of wool and was easy to feed and keep.

Giant Angoras have a dense coat, with tufts of hair on their cheeks, forehead, and ears. Their coat contains three distinct textures:

The Giant Angora Rabbit is most commonly kept as a fiber animal in that owners keep them primarily to harvest their wool. There are plenty of families who decide to keep Giant Angora Rabbits just as pets, though, thanks to their docile and gentle nature.

You will need to harvest their wool regularly, even if you don’t intend on using it commercially. You can hand shear or pluck their hair every 3-4 months. If you leave it any longer, it can become matted and uncomfortable. Even if you have no use for the wool yourself, you may find someone locally who will be happy to take it off your hands. Giant Angora Rabbits can produce up to 2 pounds of wool per year.

How Much Do Giant Angora Rabbits Cost?

You should be able to find Giant Angora Rabbits for sale from $100 and upward. If you’re looking for a rabbit with a pedigree, then expect to pay more.

If you’re looking to keep this breed as a pet, focus your search on breeders who breed their rabbits to be kept as domestic pets and commercial producing animals. If you can, ask to visit the mother rabbit and her babies. Baby rabbits who are handled regularly from birth will be better adjusted to life as a family pet.

Giant Angora Rabbits are gentle and kind-natured, but their large size means they need a confident handler. They can adapt well to life as a family pet and enjoy spending time as a house rabbit.

They do need more space and freedom than smaller breeds, so allowing them regular time to explore a securely fenced backyard will keep them happy and well-exercised. These rabbits need regular handling to remain calm and comfortable around humans.

It’s also worth spending time getting your rabbit used to being groomed when they’re still young. Their coats will need regular maintenance to remove hair, so desensitizing your Giant Angora Rabbit to this process as soon as possible will make it an easier experience for everyone.

Giant Angora Rabbits have an oval-shaped head, with broad foreheads and narrow muzzles. Their ears should be lightly fringed, with tassels of hair at the tips. They will also have head trimmings of fur across their foreheads and cheeks. Does will often have fewer head trimmings than bucks.

You may also see Giant Angora Rabbits advertised in different colors, including grey and broken colors, but none of these are accepted by ARBA either. If you want to show your rabbit or want a pedigree rabbit, white fur with ruby eyes is the only option.

Other varieties of Angora Rabbit include the:

How to Take Care of a Giant Angora Rabbit

To keep your Giant Angora Rabbit happy and healthy, you need to make sure that all their needs are met. Here’s what we recommend.

Due to their large size, Giant Angora Rabbits need a larger enclosure than your average rabbit. While they were originally bred to tolerate living in standard-sized wire cages when used as commercial wool producers, if you’re keeping a Giant Angora Rabbit as a family pet, you should provide them with a much larger space in order to keep them as happy and healthy as possible.

Choose the largest hutch that you can, preferably one that has a solid floor and is raised off the ground to help your rabbit feel safe from predators. They also need a large wire enclosure for spending time outside. Many families with Giant Angora Rabbits choose to let them spend time free in a securely enclosed backyard.

Make sure your rabbit always has safe spaces to hide, so either leave the ramp to their hutch open to allow free access or provide shelters or boxes that they can use to hide in.

Giant Angora Rabbits love to run, jump, and play once they’re feeling confident in their surroundings. Chew toys, cardboard boxes with holes cut out, and slow feeders will give them opportunities for exploration and fun.

Make sure you provide plenty of bedding for your rabbit to burrow into. You can use hardwood shavings, straw, hay, or even fleece for rabbits who are litter trained. Bunnies like to create a comfortable den using their bedding, so clean their hutch at least twice a week.

We don’t recommend using cedar or pine shavings or pellets, as these can cause respiratory or liver problems due to the volatile organic compounds THAT they release. Wood shavings or pellets from hardwood species like cedar, maple, oak, or apple are usually fine to use, but we recommend speaking to your vet first.

If you’ve trained your rabbit to use a litter box, keep this filled with a different material than what’s in your rabbit’s bed. Clean the box with soapy water once a week, and replace the litter as necessary.

Giant Angora Rabbits need regular grooming due to their fast-growing hair. It can grow up to 1.2 inches per month. Your rabbit will need brushing daily or every other day. This helps prevent matting, which can be painful for your rabbit.

You can either hand-pluck the fur or shear your rabbit using small clippers or scissors. You may find a professional groomer who is willing to do this for you.

Do Giant Angora Rabbits Get Along With Other Pets?

Giant Angora Rabbits will be happiest kept in same-sex pairs so they have companionship. You can also keep male-female pairs, but it’s necessary to have them both either neutered or spayed so you don’t end up with an accidental litter of baby bunnies!

Giant Angora Rabbits can live alongside cats and dogs, but it’s best to closely monitor their interactions and never leave them unattended together. Some rabbits may be too nervous to live alongside other pets, which are essentially predators to them.

While they may be large, Giant Angora Rabbits are docile and shy, so they can sometimes be kept with smaller rabbits of a different breed. You’ll need to carefully assess the characters of your rabbits before you decide if that’s going to be possible in your house.

Always introduce new rabbits to each other slowly, and allow them to live alongside each other in separate hutches and enclosures first. That way, they can get used to the sight and smell of each other without having to share their space. You should then be able to integrate them into one enclosure, but always make sure each rabbit has their own shelter and food so they don’t have to compete for resources.

What to Feed Your Giant Angora Rabbit

Giant Angora Rabbits were bred to survive on a commercial diet of rabbit pellets with a protein content of 16-18%. If you’re keeping them as a family pet, there is plenty that you can supplement this with. We recommend:

There are a few health conditions that Giant Angora Rabbits can suffer from, including:

When you get your new rabbit, book an appointment to see your vet so they can get a comprehensive health check. You should get your rabbit vaccinated against rabbit hemorrhagic disease and ask your vet if there are any specific outbreaks in your area, which may mean that you need to keep your rabbit inside or adapt your care practices.

If you ever notice that your rabbit’s behavior has changed, speak to your vet for advice.

It’s usually recommended to leave breeding Giant Angora Rabbits to the professionals. Most breeders will recommend having your pet rabbit spayed or neutered at the appropriate age.

This usually makes them easier to handle and less aggressive and reduces the risk of certain types of cancer.

Are Giant Angora Rabbits Suitable for You?

Giant Angora Rabbits were originally bred as a commercial breed kept for their large size and high wool production. Even so, plenty of families find them to be affectionate and gentle pets.

Giant Angora Rabbits need more space than your average rabbit, as they can grow up to 12 pounds in weight! They also need regular grooming, which can become time consuming. Left uncared for, though, their profuse coats can become matted, leading to discomfort and even skin infections.

Giant Angora Rabbits can enjoy living as an indoor rabbit for at least some of the time, but they will need plenty of time outside to stretch their legs. They enjoy playing with toys, and once used to human contact, they will enjoy interacting with adults and kids alike.

If you’re the proud owner of a Giant Angora Rabbit, let us know more about them in the comments. We’d love to hear from you!

Emma is a freelance writer, specializing in writing about pets, outdoor pursuits, and the environment. Originally from the UK, she has lived in Costa Rica and New Zealand before moving to a smallholding in Spain with her husband, their 4-year-old daughter, and their dogs, cats, horses, and poultry. When she's not writing, Emma can be found taking her dogs for walks in the rolling fields around their home...and usually, at least some of the cats come along, too! Emma is passionate about rescuing animals and providing them with a new life after being abandoned or abused. As well as their own four rescue dogs, she also fosters dogs for re-homing, providing them with love and training while searching for their forever homes.