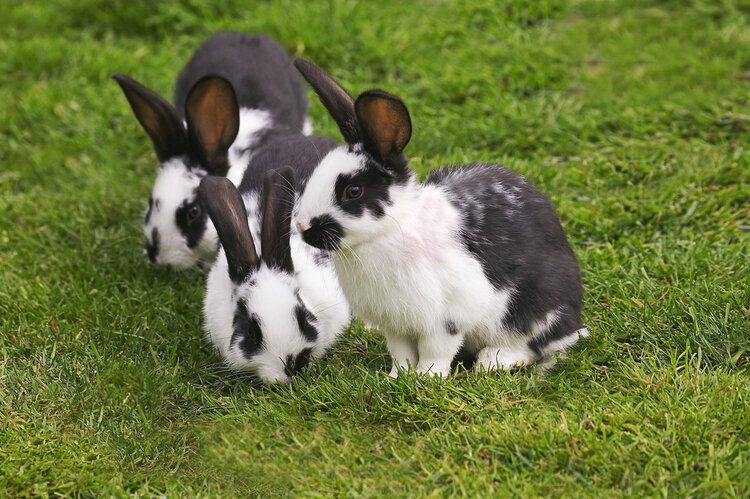 Also known as the “Giant French Butterfly”, the Giant Papillon is one of a handful of rabbit breeds that is now extinct due to a lack of popularity in shows. Kin to the Checkered Giant, the Giant Papillon was bred in France for only a few decades before being outshined by Flemish Giants and other larger breeds.

While it may not be with us any longer, the Giant Papillon has still left its mark through crossbreeding to produce more recognized rabbits. Today, we’ll be looking at the history and origin of this heritage breed, as well examining its similarities to its closest living relative: The Checkered Giant.

History and Origin of the Giant Papillon Rabbit Breed

Large, spotted rabbits had been seen in the wilds of Germany and France well into the middle of the 19th century, sparking the curiosity of European rabbit breeders. What would the result be of domesticating these so-called spotted hares, or of crossing them with already recognized breeds?

While many of the early generations of these crosses did not have the distinct markings for which the Giant Papillon or Checkered Giant have become known, they paved the way for introduction into the European rabbit breeding world. Originally intended as meat rabbits, soon rabbit fanciers took a liking to the idea of crossing these spotted giants with the Flemish Giant – eventually producing the butterfly markings on the nose that gave this breed its name.

Curiously, it’s hard to tell where this breed begins, and where the similar Checkered Giant ends. With another breed known as the German Giant Spotted, it’s questionable whether this breed is truly extinct, or whether the bloodlines have simply mixed to a point where there is no effective difference.

Large and displaying a full arch, rabbits in this giant, checkered family rarely weigh more than 16 pounds. Their prominent ears and exaggerated stance make them very easy to distinguish from the English Spot, the only breed to share this uncommon coloring.

The markings are a dead giveaway for this family of breeds: On a white body, you’ll find dark markings in the shape of a butterfly on its nose, as well as around the ears, spine, hips, and tail. In shows, this type of breed is judged based on the positioning of its characteristic markings.

Similarity to the Checkered Giant

While the Giant Papillon is no longer bred under that name, there is still a debate as to whether it is truly extinct. Because the Checkered Giant and German Giant Spotted are so nearly identical in every regard, it could just as easily be said that this breed is still alive today – just under different names.

Every rabbit in this giant checkered family displays a curious combination of attitude traits. While their large size makes them predisposed to having a generally relaxed, docile nature where they enjoy napping and sunning themselves… They’re also known to be quite territorial, and willing to settle arguments with their teeth and front paws. For this reason, it’s best to give them their own space and spend social time with them on more neutral territory.

Whether the Giant Papillon can truly be said to exist today or not, it’s evident that the breed’s genes live on in the Checkered Giant and German Giant Spotted. While this family is not a popular breed to keep as a house pet, they’ve gained quite a bit of traction in shows for their ability to display unique and interesting coat configurations.

Thanks for reading today! If you’d like to learn more about the Giant Papillon and its relatives, we encourage you to read Lynn M. Stone’s Rabbit Breeds: The Pocket Guide to 49 Essential Breeds, as well as Bob D. Whitman’s Domestic Rabbits and Their Histories. Both are packed with information on this as well as many other breeds, and we consistently use them as sources in our breed articles here at Rabbitspot.