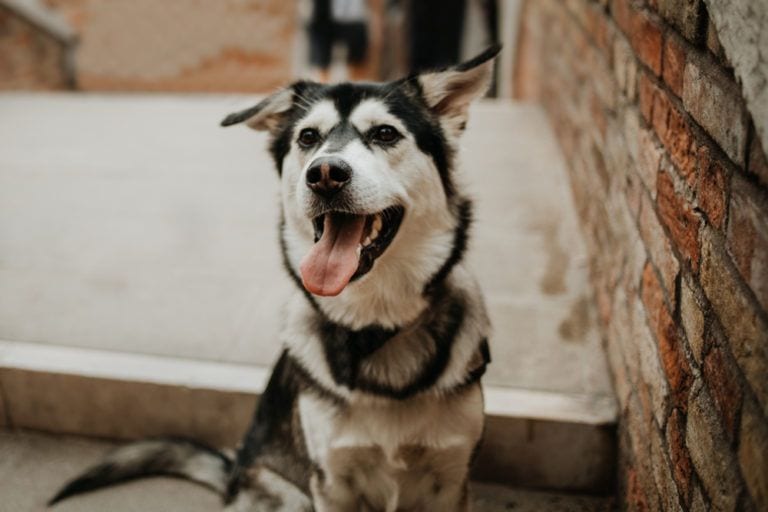 The Goberian is a medium to large cross of the Golden Retriever and the Siberian Husky. Also called a hybrid he should live between 10 to 15 years and takes part in a wide range of activities including sighting, hunting, agility, weight pulling, guarding, sledding and search and rescue. As you can see he is a very active dog but he is also very social and friendly.

Where does the Goberian come from?

The Goberian is a recent designer dog, probably arrived in the last 10 years or so and is still fairly uncommon. In all probability a big part of why this cross may have been made was to get the gorgeous blue eyes with the gorgeous golden coat. But we cannot know that for sure as not much is really known about who, where and why this designer dog was first bred. When dealing with a hybrid dog the best way to determine the personality of the dog is to look at the breeds involved in the cross.

The Siberian Husky is thought to have its origins amongst a Siberian tribe of nomads called the Chukchi. DNA tests prove this is one of the oldest dogs we have, thought the history of its breeding is not really known. All we can say for sure is this tribe used their dogs as a family dog and to pull them on sleds to get around. They would sleep with the children to keep them warm, so were absolutely trusted. In 1908 they were imported to Alaska and used as dogs for sleds in the gold rush. They also took part in sled races. The last one came from Siberia in 1930 when the borders were then closed. The Siberians in America thrived but did change slightly. He was recognized by the AKC in 1930.

The husky today is still like a pack dog, he needs people around him who he sees as part of his pack, and he needs his owner to establish himself clearly as the pack leader. He will still test you sometimes so be firm. He has a lot of energy and can be destructive if not allowed an outlet for that. He likes to dog so it may be worth giving him a spot in the garden where he is allowed to. He is charming, playful and social and loves to show off. He is not a barker but he does like to howl. He is not a good watchdog.

The Golden Retriever was bred to be a better waterfowl retriever than the spaniel or setter in the 19th century. The breeder, a Lord Tweedmouth wanted a dog who excelled at it, was attentive to his owner and was even tempered and loyal too. He wanted a dog to take with him when hunting but also to be a companion when home. When he was creating the breed he kept he yellow puppies and gave away the other colors and continued to work with just the yellows. His dog was a success not just I the filed but also in dog trials. His name was officially made the Golden Retriever in 1920.

The dog is a wonderful addition to any family and it is understandable that it is one of the most popular breeds. He is calm and friendly, eager to please and great to train. He loves people, working with them, playing with them, giving and receiving affection. He sees the humans around him as his pack and his owner as pack leader. He needs at least an hour of exercise a day and some mental work too. He can be boisterous sometimes and will overeat and easily become overweight if you do not watch his portions.

The Goberian is a friendly dog who loves to be social and be with people. He tends to have the gentleness of the Golden Retriever but more drive which they get from the Husky. He can be independent sometimes and is intelligent. He is loyal and affectionate with his family. He is also alert so he can be a watchdog. He likes to active especially if it being active with you. He is good with other pets and children and is cheerful each day bringing a smile to your face when you see him. He is eager to please you and is usually quite obedient making training easier. Sometimes Goberians will bond more closely with one particular family member though he is still friendly and affectionate with the others.

The Goberian is a medium to large dog weighing 35 to 80 pounds and measuring 20 to 24 inches tall. He often has blue eyes like the Husky but can sometimes have the brown eyes of the Golden Retriever. His head is rounded and well proportioned and his ears hang down. He has a narrow muzzle and a body that often looks more like the Golden Retriever. His tail though is more like a Husky’s as are his legs. His coat is double, with the inner coat being soft and dense and the outer coat being long and straight to a little wavy. It gives good protection from both hot and cold weather. Common colors include black, white, brown, gray, cream, brown and golden.

How active does the Goberian need to be?

He is a very active dog and will need exercise every day to keep him well behaved, happy and healthy. Ideally he will be with an owner and family who also enjoy regular activities that he can come along and join like jogging, cycling, walking, hiking. He should get a brisk 60 minutes a day including some play time. Ideally you have a yard he can play in and you could also take him to the dog park. He can become destructive with digging, chewing and barking when he is under exercised. He is not really suited to an apartment.

Training will be moderately easy/difficult. He will need consistency and you need to use a firm but positve approach. He will not respond well to harsh tones, scoldings and so on. Praise him when he does well, use treats and rewards as motivation. He is intelligent and can learn, some are easier to train than others, it depends on which is stronger in him the husky or the retriever. If the former, he likes to test your leadership. If the latter he is eager to please and easier to train. Make sure you have him socialized and trained starting from a young age.

He has fairly low grooming needs compared to some other dogs. He will not shed much usually and just needs to be brushed two or three times a week to keep his coat free of mats and looking healthy. He does not need a bath too often just when he gets really dirty. Only use a dog shampoo on his coat. He should have his teeth brushed at least three times a week and his ears checked and wiped clean once a week. Finally his nails may need trimming now and then, take care as he has nerves in the lower section. Many dog owners leave this to a groomer, or you can ask them or your vet to show you how.

He is good with children, other pets and other dogs but early socialization and training is still an important part of that. Make sure the children around him know how to play without hurting him and what things are inappropriate.

He is a good watchdog and will bark to alert you if there is an intruder. He is not good for apartment living. He is better in cold weather than in hot. He is best if he has access to a large yard or land. He will need to be fed high quality dry dog food totaling 2 1/2 cups to 3 cups a day. Divided it into at least two meals though. He will bark occasionally and may or may not have the husky howl.

He may inherit some of the health issues or possible conditions that his parents are prone to. They include OCD, epilepsy, heart problems, bloat, cancer, Von Willebrand’s Disease, Joint dysplasia, eye problems and allergies.

Costs involved in owning a Goberian

Average new puppy price for a Goberian is $250 to $1500 but they are not easy to find at the moment. He will need a crate, collar and leash and have a medical check up, a micro chip put in and neutering which will be about $450 – $500. Average annual medical expenses for pet insurance, check ups, flea prevention and vaccinations are between $485 to $600. Average annual non-medical expenses for food, treats, training, license, long hair grooming and toys are between $920 to $1000.

Looking for a Goberian Puppy Name? Let select one from our list!

The Goberian is a great active dog, very friendly and social, good with kids and affectionate. He is best in cold climates than very warm ones and in a house with a yard or land rather than an apartment. He will make a very loyal and attractive companion.