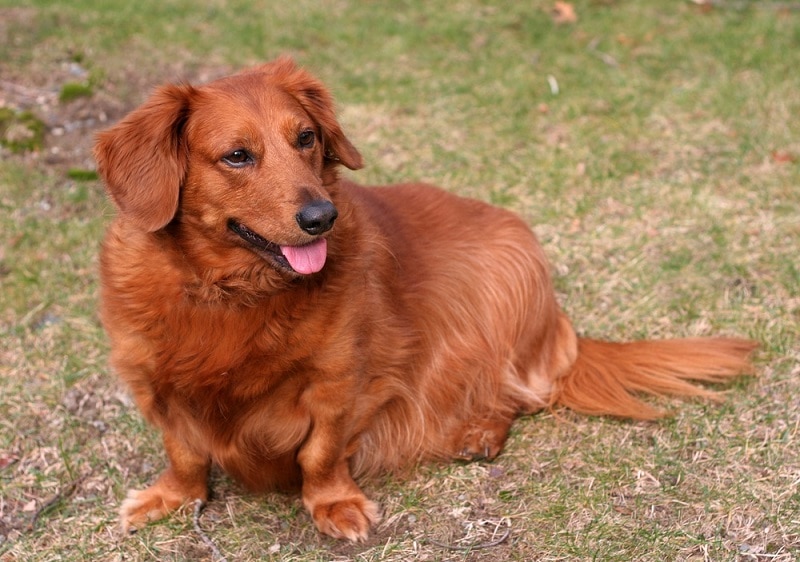 The Golden Dox is a medium to large hybrid or mixed breed, the result of a breeding between the Golden Retriever and the Dachshund. With a life expectancy of 8 to 14 years she is a very talented dog participating in activities such as drug detection, competitive obedience, tracking, agility and hunting. She is a very willing and happy dog, affable with people and loyal.

Where does the Golden Dox come from?

The Golden Dox is one of many what are being called designer dogs. In the last twenty years designer dogs have become extremely popular, a mix of cuteness, unusual pairings, the fact celebrities are buying them too, make them a big trend right now. Some people praise them some people are against them. Everyone with any decency is against the puppy mills and disreputable breeders who have jumped on this trend, or perhaps added to it to profit from it. The results of a designer dog are not something that can be guaranteed and puppies even in the same litter can vary in looks and temperament. Here is a look at the Golden Retriever and the Dachshund as a way to see what is behind the Golden Dox.

The Golden Retriever comes from Scotland where he was bred by a man called Lord Tweedmouth. He was aiming for a dog who would be an excellent retriever of waterfowl, would listen better to the hunter than spaniels and setters did, and would be a loyal companion at home. He focussed on the yellow puppies and so the Golden Retriever came about. He was recognized in 1911 as a distinct breed by the English Kennel Club and in 1932 by the American.

Today he is one the most popular family dogs, he is sweet, eager to please, has a great disposition and loves people. He is calm and easy to train. He gets on well with children, other dogs and pets too.

The Dachshund is a German bred dog created to hunt den animals like foxes, badgers and so on, or to hunt in packs larger prey like wild boar. The German breeders over the 18th and 19th centuries wanted to create an elongated dog who was fearless, tenacious and bold. There are smooth Dachshunds and then later there were long coated ones. Sometime in the 1800s they began to be bred to be pets rather than just hunters, particularly in England where Queen Victoria was a fan. They became smaller as a result and in 1885 had come to America. Here and England today they are now known as popular family pets but in parts of Europe they are still considered hunting dogs.

He is a lively and sometimes rash dog today and he also a string stubborn streak. He also loves to cuddle though and is very loyal. He likes to get his own way, some can be

troublemakers, some are calm and some are somewhere in between.

The Golden Dox is a happy affable dog who enjoys being with the family and socializing. She is clever and loyal, brave and gentle. She is also alert and can be suspicious of strangers making her a good watchdog. She makes a great family dog and is willing and kind too.

She is a medium to large dog measuring up to 23 inches tall and weighing 30 to 60 pounds. Her coat can vary depending on who she leans more towards, the Retriever or the Dachshund. It could be a single or double coat, sometimes medium in length sometimes long, sometimes smooth, sometimes wiry. Colors that are common include cream, yellow, red, black, golden, white, brown and tan. She has a flat skull that is medium sized with drooping long ears, almond shaped eyes and a black nose. She appears to be a sturdy dog with a long body and short legs. Her feet usually turn outwards.

How active does the Golden Dox need to be?

This is a fairly active dog, she will need regular exercise both physician and mental to keep her happy and well behaved. She will need at least one long daily walk as well as some play time each day. Yard play, play indoors, a trip to the dog park are all thing she would enjoy. If you are active and like to jog or walk each day she could come with you.

She is intelligent and from the Golden Retriever she may inherit an eagerness to please that usually makes training go fairly smoothly. However the Dachshund can be stubborn and strong willed and that may mean you have some corrections to do as you train. Just stay firm and positive, reinforce good behavior with rewards and praise. Unless you get a specially stubborn Golden Dox training should go fairly well. When you get her you should start early socialization and training as it will help improve her adaptability and how she gets on with others, and it will make things easier for you as the owner.

Living with a Golden Dox

The Golden Dox has moderate grooming needs and is a moderate shedder too. She will need daily brushing to keep the loose hairs under control and you will probably need to do some clean up after her when she is shedding on your furniture and clothing. Use a solid bristle brush and you will get her coat looking healthy and shiny. Just give her a bath when she needs one. She is not a hypoallergenic dog so not suitable for people with dog allergies. Wipe her ears once a week and check them to prevent ear infections. Clip her nails when they get too long being sure to not cut down to the quick where there are nerves and it will hurt her. Brush her teeth ideally daily, or at least three times a week.

To ensure any dog is at their best around children, other dogs and other pets be sure to start socialization early with them. The Golden Dox is usually good with children, other pets and other dogs. It is a good idea to still supervise small children with her in case they get bumped over accidentally. Also make sure you teach the children not to pull at her ears or tail, not to sit on her back and how to play safely and interact kindly with her.

She is a good watchdog and will bark to alert you if an intruder enters. She will need 21/2 to 3 cups of high quality dry dog food a day, divided into two portions. She will bark occasionally. She can live in an apartment as long as you take her out each day and since it will mean no access to a yard, she may need a long walk plus something else at a dog park, or make it two walks. She is good in most climates but not extreme cold.

To avoid having health issues with your puppy or with your dog as she grows you need to buy from a trustworthy breeder. Ask to see health clearance certificates not just for the puppy but for her parents too. Visit the puppy before you buy it. Any dog could potentially inherit the health concerns his or her parents have. For the Golden Dox these include IVDD, epilepsy, bloat, Cushings, diabetes, deafness, heart problems, cancer, eye problems, joint dysplasia and allergies.

The average price of a designer puppy is greatly affected by if it is especially popular or ‘in’ at the time of purchase. Other factors include where you buy from, your location, and age of the puppy. A Golden Dox is between $500 to $1000. She will need a collar and leash, a crate, a carrier bag, spaying, a micro chip, blood tests, shots and deworming. These will cost between $490 – $600. Average annual non medical costs covering a license, training, food, toys, treats and long hair grooming if applicable will cost between $920 – $1000. Less if your Golden Dox is a medium haired version. Average annual medical costs covering flea prevention, general health check ups, vaccinations and health insurance are between $485 to $600.

Looking for a Golden Dox Puppy Name? Let select one from our list!

The Golden Dox is a lovely dog, great for a family, a couple or a single just as long as you are active and can keep her exercised. She is a very affable dog and once you get over her stubborn moments you will be the best of friends.