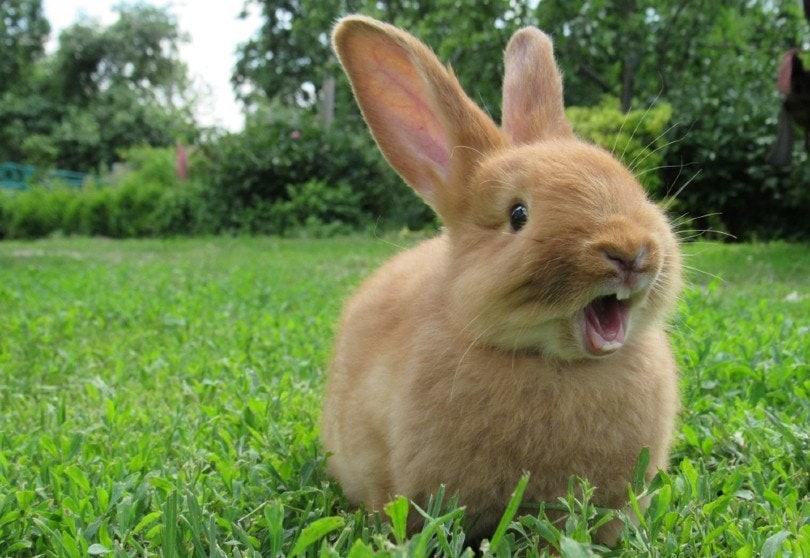 The Golden Glavcot is a rare breed of red rabbit that was extinct before breeders brought it back about 50 years ago. However, they could only get back the red version, and the silver and blue variations remain extinct. It’s similar in appearance to a wild rabbit but is affectionate and calm. If you are a rabbit lover, keep reading while we look at this unique breed to uncover more interesting facts about it.

Quick Facts about the Golden Glavcot

The Golden Glavcot has vague origins in Europe, but it first came to the United States in 1925 and was popular for its hair. However, other animals produced a more desirable fur, and all versions of the rabbit became extinct by 1960. English breeders brought back the red version in the 1970s, but the silver and blue remain extinct. It finally returned to America in 2019 when breeders imported two pairs to begin reviving America’s Golden Glavcot. It has a wild appearance and is capable of surprisingly high jumps, so you will need to be careful about your enclosure. It’s a calm rabbit that is friendly, sweet, and loving.

How Much Do Golden Glavcot Rabbits Cost?

Unfortunately, the Golden Glavcot is extremely rare. It will not be easy to find a breeder, so you can expect to spend several hundred dollars if you insist on purchasing one. It’s also not likely to be available at a local pet store. Your best chance is to search for breeders in the United Kingdom, though their recent arrival in the United States may increase their availability over the next few years.

Most owners describe the Golden Glavcot as friendly and affectionate, though experts make sure to point out that the breed is newly revived and may display unknown aspects of its behavior. It usually likes to be cuddled and pet, but it can be skittish, especially around loud noises, like many rabbit breeds. It’s delicate and easy to injure while handling, so it’s better for choice for experienced owners.

The Golden Glavcot’s gold color comes from a diluted red gene. Generally speaking, it is a delicate rabbit that usually weighs about 5 pounds. It has upright and proportionate ears and a moderate-sized head with a straight tail. It’s mostly solid-colored, but the fur will be a lighter area around the chest, and it is one of the few breeds that does not have a white belly.

How to Take Care of Golden Glavcot Rabbits

Most experts recommend a cage four times the length and width of your rabbit, and a cage close to 36″ W x 36″ L x 24″ H will be suitable for most Golden Glavcots. If you have the space in your home, a taller cage is better because you can install some ramps for your Golden Glavcot. You will also need to add a food bowl and a water bottle to the cage, as well as an unending supply of Timothy hay. Your rabbit will spend much of its day chewing on this hay, and it must be allowed to do so to keep its front teeth from growing too long.

When setting up your rabbit cage, you will need to decide between using a wire bottom cage or one that uses a soft bedding. We recommend soft bedding because it is easier on your Golden Glavcot’s feet. The wire bottoms can injure the feet of your rabbit, and it can be especially bothersome in old age if arthritis sets in. However, this option requires that you change the bedding often to keep it fresh and odor-free.

A wire bottom cage is much easier to maintain because the rabbit urine and feces will fall through to a tray below. You can then easily clean the tray without opening the cage. We recommend this style for children and first-time rabbit owners.

Do Golden Glavcot Rabbits Get Along with Other Pets?

Yes, Golden Glavcot rabbits are gentle creatures that will never get aggressive. However, as we mentioned earlier, this breed is delicate and skittish, so loud noises can easily scare it, and it can be injured if chased by other pets in your home. At only a little over 5 pounds, house cats may try to attack it, and many dog breeds also have a strong prey drive that can cause them to chase after your rabbit.

What to Feed Your Golden Glavcot Rabbit?

Your Golden Glavcot is an herbivore and will eat mostly Timothy hay. To make sure it gets the proper nutrition, you will also need to feed it vegetables and commercial rabbit pellets. You can also provide fruit as an occasional fruit, but the fruit has a lot of sugar that can cause your pet to become obese.

Proper nutrition is the primary way to keep your Golden Glavcot healthy. Timothy hay is also essential to wear down the teeth and prevent them from causing sores or teeth spurs. You should also let our rabbit roam free for a few hours each day for mental and physical stimulation. Keeping your rabbit active will make it happier, less susceptible to boredom and loneliness, and physically fit.

You will need to be concerned about your rabbit’s jumping ability when allowing your rabbit to roam around your home. It can jump quite high and get over most baby-style fences, which can injure the rabbit and potentially put it in danger with other pets.

While it is very easy to breed two rabbits, most experts recommend not breeding them for two reasons. First, it will be difficult and expensive to obtain two Golden Glavcot rabbits. Second, rabbits will breed faster than you can find homes for the offspring, and you can quickly find yourself overwhelmed and even in legal trouble.

Are Golden Glavcot Rabbits Suitable for You?

Yes, if you can find a Golden Glavcot, it will make a great pet for you and your family. It’s friendly, calm, and likes to snuggle. It’s delicate and bruises easily, so you will need to keep it away from aggressive pets, but it enjoys the company of other rabbits.

We hope you have enjoyed reading over our look into this rare rabbit breed and are convinced to look into it more. If you think it would make a good pet, please share this guide to the Golden Glavcot rabbit on Facebook and Twitter.