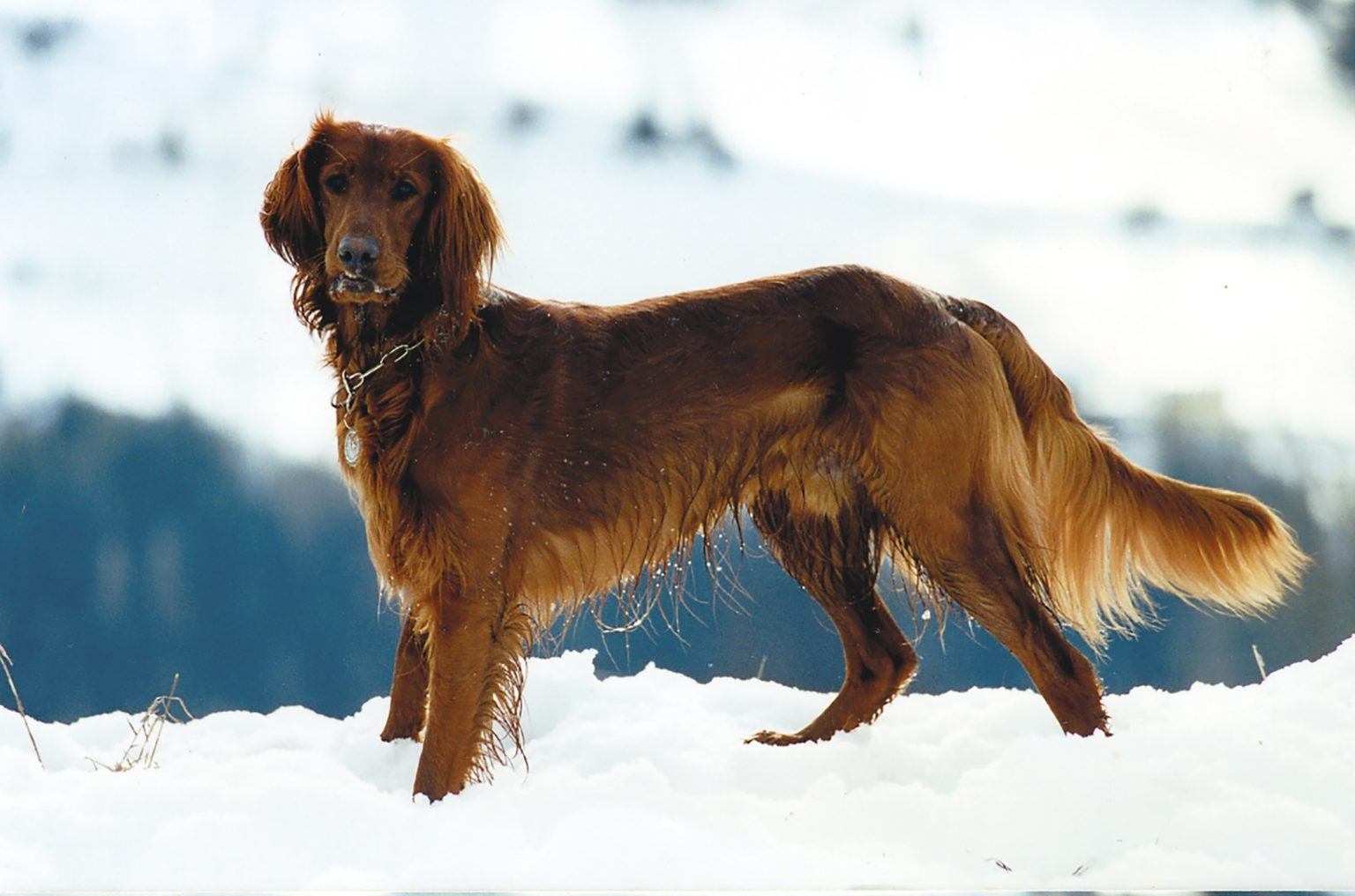 Golden Retrievers are one of the most popular breeds for families, but many people are worried that retrievers will be too energetic for their home. If this sounds like a hesitation you are worried about, the Golden Irish may be the perfect dog for you.

The Golden Irish is a cross between a Golden Retriever and an Irish Setter. These dogs have the same loving and friendly temperament of a Golden Retriever, but they aren’t as active, making them more suited for moderately active families.

To find out if a Golden Irish is right for you and your family, keep reading. Although this breed certainly is beautiful and lovable, they are not right for all households, such as families that live in apartments. Let’s get started.

Golden Irish Puppies – Before You Buy…

Because Golden Irish puppies are a cross between Golden Retrievers and Irish Setters, they are considered designer dogs. Being designer dogs, they are on the expensive side. This breed is relatively rare. So, you should have at least $1,000 set aside for the puppy.

From our research, we found that Golden Irish puppies typically cost around $1,500, but the range for the puppies begins at $800 and tops out at $2,200. Very few breeders offer Golden Irish puppies, making it difficult to find breeders in all areas. The lack of breeders also means there are fewer options to choose from.

On top of paying for the puppy, you will also need to pay for food, a leash, a collar, vaccines, licensures, and more. With all of these prices put together, you can easily expect to pay over $2,000 for a Golden Irish puppy.

3 Little-Known Facts About the Golden Irish

1. They are one of the most athletic dogs.

Many people make the mistake of viewing beauty and brawn as being mutually exclusive. With Golden Irishes, the reality could not be further from the truth. These dogs are highly athletic, making them an ideal choice if you want a dog to keep up with your fast-paced life.

From running to swimming to jumping, Golden Irishes can do it all. Their large and muscular stature from the Golden Retriever is matched with the slender and athletic frame of the Irish Setter, making them the perfect dog for athletes.

2. Their friendliness is deceiving.

From their athletic build to their hunting background, the Golden Irish is the perfect choice if you want a dog to bring with you hunting. At the same time, these dogs are super friendly, which is why most people don’t think of a Golden Irish as a classic hunting dog.

3. They are fantastic swimmers… and love it!

As we mentioned above, Golden Irishes are great swimmers. Not only that, but they absolutely love the water. Both Golden Retrievers and Irish Setters love getting their paws wet and splashing about. Their descendants love it too. Don’t bring your Golden Irish next to water unless you want it to get a bit wet.

Temperament & Intelligence of the Golden Irish

Golden Irishes are one of the most intelligent yet lovable dogs around. Most intelligent dogs are a bit mischievous, but never the Golden Irish. These dogs love bonding and playing with their owners in ways that are exciting and new.

The Golden Irish makes one of the best family dogs. These dogs are super patient and loving for children of all ages. They are not known to be aggressive with young children, and they actually flourish in large households. Although active singles can offer a great house for a Golden Irish, they tend to enjoy having a lot of family members and friends.

Additionally, you should always supervise playtime between any dog and a young child, including a Golden Irish. Although this dog is unlikely to be aggressive, there is always the chance that the dog could snip or snap at the child. It is much more likely for the dog to accidentally run into the child and knock it over from excitement.

Even though Golden Irishes are friendly with people, they aren’t necessarily as great with other animals, though they are not aggressive. Golden Irishes can get really jealous of other dogs that are getting the attention from their owners.

Because of this fact, your Golden Irish may feel sad or depressed if you have another dog that is equally as clingy or needy. Even when the dog is jealous, the Golden Irish is unlikely to become aggressive to the other dog.

Because Golden Irishes have hunting genes, they are prone to chasing other animals, such as cats. Most of the time, the Golden Irish will not do anything aggressive or painful to the cat, but the chasing is something that your cat will not like. Stop this behavior as soon as you catch it.

Things to Know When Owning a Golden Irish:

Golden Irishes are a considerable investment because of how much time and energy they require. Because they love their humans so much, these dogs are really clingy, and they need to burn a lot of energy every single day.

Feed your Golden Irish a high protein and high fat diet. This will provide them the energy they need to stay active. Most people recommend feeding a Golden Irish about 3 cups of high quality dry dog food a day. It’s also a good idea to provide your Golden Irish a glucosamine supplement if the food you select doesn’t already have this.

Even though the Golden Irish isn’t as energetic as Golden Retrievers, they are still much more energetic than the average dog. If you do not exercise your Golden Irish, it will exercise itself for you, most commonly by running laps in your house and making a mess.

Just a walk around the block will not be enough for a Golden Irish. You need to provide them a lot of active exercises, such as fetch, jogs, or other tasks that burn a lot of calories at once. Swimming is a great exercise choice because it burns a lot of calories, but it is also gentle on the dog’s joints.

If you were a bit overwhelmed by the idea of playing with a Golden Irish, you will be happy to learn that these dogs are incredibly easy to train. They are highly intelligent, love to learn, and love to please their owners even more. This is the perfect recipe for a highly trainable dog.

If you are looking for a dog breed that doesn’t dirty up your home or trigger any allergies, the Golden Irish is not for you. This breed has a very long, dense coat that sheds frequently. If you want to manage the dog hair in your home, you should brush its fur once a day.

The one good thing about their long, dense coat is that you rarely have to bathe them. You may need to give your dog a bath on occasion after it plays in the mud or some other particularly dirty occurrence. Other than that, the dog is very good at bathing itself.

You will need to clean out the Golden Irish’s ears frequently. Because of the fur that hangs over the Golden Irish’s ears, bacteria gets trapped inside, leading to ear infections. The fact that these dogs love water makes the issue even worse. Check your dog’s ears about once a week and clean them as needed.

Both Golden Retrievers and Irish Setters are healthy dogs, making the Golden Irish healthy as well. Proper grooming and diet should help eradicate most minor conditions, whereas a preventative diet and gentle exercises can help with the more serious conditions.

Because these dogs are large and highly active, they are prone to hip dysplasia, especially with old age. If your dog has this condition, taking it to swim frequently will allow your dog to get the exercise it needs without putting further pressure on the hip socket.

Golden Irishes are generally the same, no matter the sex. The males may be slightly larger, but the difference in size is unnoticeable to most. The females may also be a bit more reserved and mature faster, but they’re still super outgoing and friendly in comparison to other breeds.

A Golden Irish is one of the best breeds for people who want a highly active, fun-loving, and easy-to-train dog. With both Golden Retriever and Irish Setter in its blood, the Golden Irish loves people and is highly intelligent. You will have very little issues bonding with this dog and introducing it to the rest of your family.

Other than those few exceptions, the Golden Irish makes the perfect family pet for active families. Whether you love hiking, swimming, or hunting, this breed will be more than happy to tag along for the ride.

We have more Golden Retriever Mixes in our related article!