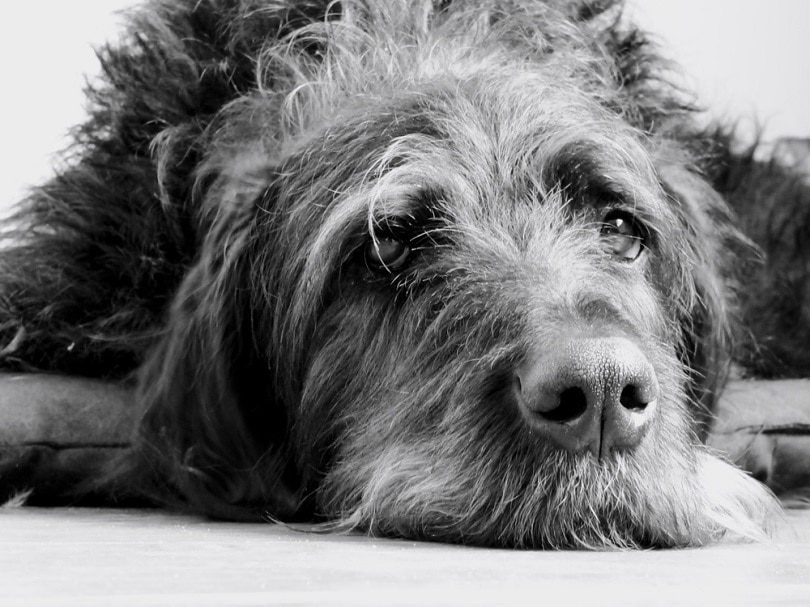 The Great Danoodle is not a common hybrid dog. He is the result of breeding the Great Dane with the Standard Poodle and is also known as the Great Danedoodle, the Great Danepoo, a Danedoodle or Danepoo. He has a life expectancy of 8 to 13 years. Mixing the poodle with another breed is a common thing for designer dogs as the Poodle is low shedding and is usually hypoallergenic making its offspring often (though not always when mixing breeds) also hypoallergenic.

Where does the Great Danoodle come from?

A lot of people who are fans of hybrid or mixed dogs go for the smaller to medium sized dogs, of which there are many. Small can be cute, it is more suitable if you have limited space or if you are less active. But for people wanting a larger dog there are also some pretty fantastic dogs, as long as you source from a reputable breeder. The Great Danoodle gives people a larger sized dog with the potential of being hypoallergenic. While some may turn their noses up at these so called designer dogs the fact is if you look back at the origins of a purebred dog, there was mixing going on! The Great Dan for example comes from a blending of the English Mastiff and the Irish Wolfhound. These newer dogs have yet to settle but who knows, maybe in a hundred years or so the Great Danoodle will still be around and will no longer be considered a mutt! To get a sense of what goes into this dog lets take a look at the Great Dane and the Poodle.

The Great Dane is believed to come from the Assyrians who brought them to the Romans and the Greeks. Some think that they are the result of mixing ancestors of the English Mastiff with the Irish Wolfhound or Greyhound. They were first called Boar Hounds as they were bred to hunt Boar, and they even had their ears cropped to stop the boar tusks from ripping them. Then in the 1500s they were called English Dogges. It was not until the 1700s that the name Great Dane came, after a French person named the ones he saw in Denmark as Grand Danois. In case you are wondering the Danish actually had nothing to do with the breed! In the late 19th century breeder refined him focusing on his temperament as he was still quite aggressive from their original breeding purpose.

Thankfully those breeders were successful and the Great Dane today is not at all like his ancestors. He is gentle, affectionate, sweet, calm and great with children despite his size. He really wants to please and this makes training a lot easier. He is very much a people dog, he wants to be where everyone else, he loves large families and friends visiting. They can even try to get on your lap, but with not much success! He does have a protective side and he will defend his family if he thinks they are in danger.

Another very old breed is the Poodle. The Poodle comes from Germany where he was bred to go out hunting and retrieving waterfowl. That is why his coat is how it is, to better offer protection against the wet and cold and so that it did not snag easily. When he came to France they loved his look and refined the breed to their own tastes. Around the 1400s they bred very small Poodles together until eventually they got a toy sized Poodle that became a popular companion to the rich. The miniature sized Poodles were used as hunters of truffles, and the standards continued as waterfowl retrievers. When circus performers realized the Poodle was very good at learning tricks they also adopted him and sculpted his coat into various fanciful shapes. Poodle owners saw this and also adopted this fanciful sculpting. He arrived in in England some time in the late 1800s and in America around the same time.

Today the Poodle is often stereotyped into being snobbish and outlandish in appearance. In fact if he knows you he is anything but standoffish. He is affectionate, loving, playful and quite entertaining. He is also more intelligent than most people realize, and with his eagerness to please he is easy and quick to train. He does have a fair bit of energy to burn off, and he can take a while to accept new people.

The Great Danoodle is quite the epitome of a gentle Great . He loves people but does not get over excited or start jumping up at people when they arrive. He is smart, calm natured, loving and affectionate to his family and owner. He tends to be obedient too and loves getting praise and attention. He is very responsive and very loyal.

He is a large to Great breed weighing 90 to 110 pounds and standing 28 to 30 inches tall. He most often takes after the Poodle in his coat which is something that makes him quite popular amongst allergy sufferers who want a large dog. However occasionally he does have a more wiry coat like the Great Dane. If it is like a Poodle’s it is corded, dense, curly and harsh. If it is like the Great Dane’s it is short, thick and silky. Common colors are whites and light grays.

How active does the Great Danoodle need to be?

He is large so he needs regular exercise every day but his needs are more moderate than a purebred Poodle. Take him on a couple of walks a day and add in some dog park time, play time and he should be happy. If he is becoming overweight or is acting out these may be signs you need to up the exercise a bit more.

He is fairly easy to train because he is eager to please, intelligent and willing to listen and obey. You should still make sure you are clearly the pack leader using a firm tone, and use rewards, treats and praise to encourage him. His size may make some training harder if you are in a smaller space. Early socialization and training are something you should always undertake with any dog to get the best temperament and behavior.

Living with a Great Danoodle

He does not shed a lot and has low grooming needs for the most part. Brush him once or twice a week and give him a bath when he needs one using a doggy shampoo. As he does not shed much there will not be a lot of clean up to do around him. He will need hair to be trimmed when it grows too long between the pads on his paws. He will also need his teeth brushed ideally once a day, his nails clipped if they get too long and his ears checked and wiped clean. When brushing teeth use a toothpaste for dogs. When cleaning his ears do not push anything into the ear, just use a dog ear cleaning solution on a cotton ball and wipe them over.

He is Great but he is gentle. Early socialization and training can help him remember his size when with children and other pets. He is very good with children and other animals in general. You should teach the children too that he is not a horse, he doesn’t want his ears or tail pulled and to never mess around with a dog’s food when he is eating.

The Great Danoodle can be a good watchdog as he does bark to alert you to strangers.He does have a loud bark and he is moderate barker. Training him to stop when you give that command is key to controlling the noise. He will need to be fed a high quality dry dog food. He needs between 4 to 5 cups a day divided into a least 2 meals. He is actually better in warmer climates than cold.

The best way to give yourself better odds at having a healthy puppy and dog is to use a trustworthy breeder. Do not buy from pet stores, puppy mills or anywhere you get a bad feeling from regardless of the price. The Great Danoodle can inherit health conditions from both parents which could include Addison’s Disease, bloat, Cushing’s disease, epilepsy, cancer, Von Willebrand’s Disease, heart problems, Joint dysplasia, eye problems, patellar luxation, skin problems and Development Issues.

The puppy will cost between $800 to $1500. He will need a collar, a crate and a leash. He will also need a medical check up, some tests done, a micro chip put in, neutering and deworming. These costs come to between $450 to $500. Yearly costs for medical purposes such as pet insurance, check ups, shots and flea prevention could be between $485 to $600. Yearly costs for non-medical purposes such as a license, training, food, treats and toys could be between $500 to $600.

Looking for a Great Danoodle Puppy Name? Let select one from our list!

He is a wonderful loyal, responsive, calm dog and will bring a lot of joy to your home. He may turn some of his toys into scrap pieces due to his strength but he would never use that strength against you or the children.