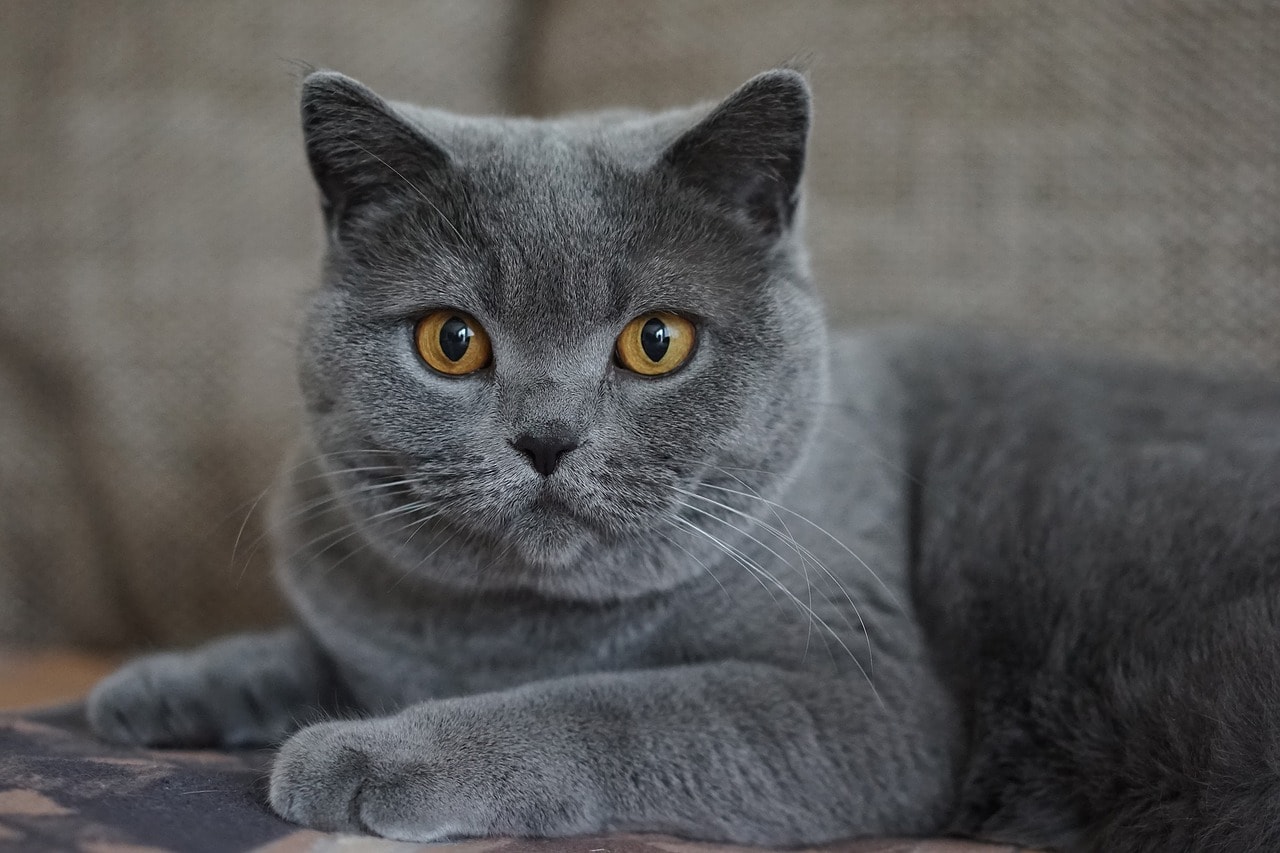 While grey is one of those stereotypical cat colors, only a few breeds regularly appear in a grey color. In these breeds, grey usually isn’t uncommon, though. It is simply a dilated form of solid black. Grey cats also have other patterns, like tabby, calico, and torties.

Of course, mixed-breed felines can appear grey as well. However, in this article, we’ll be looking at purebred cats that commonly come in a grey color. Some of these cat breeds are very common, such as the British Shorthair. Others are relatively rare and difficult to find unless you’re in a specific geographical area.

The American Shorthair is one of the most common breeds of cats in the United States. Most generic cats in the states are American Shorthairs. This breed likely came to North America with the first settlers as far back as 1620. In all likelihood, this breed is descended from those first cats the settlers brought over, which were likely from various breeds.

They are known for being athletic and hardy cats—which they had to be to survive those harsh first days. They have a dense “hard” coat and aren’t particularly fluffy. Usually, they’re outgoing without being people-dependent. They are incredibly independent and can usually get along with children as long as they are treated appropriately.

They are a rather playful breed that is known for being active. While they are easygoing, they also don’t like to be handled too much.

The Chartreux is the national cat of France. Though they have extremely skinny legs, they are muscular cats, which causes them to have some pretty funny nicknames. The only coat they come in is “blue” or grey. They are quiet and affectionate but are not people-dependent. They are perfectly fine being by themselves and are not overly clingy.

Many people describe these cats as having a dog-like personality. They can even be taught tricks as long as they’re in the mood. Their prey drive is very high, which makes them suitable pest controllers as well.

They are genuinely shorthaired cats, but they are pretty plushy.

A rare breed in the United States, the Korat originally came from Thailand. A breeding population has not yet been firmly established in the U.S., making them still a bit uncommon. They have a short coat that only comes in grey with silver tips. This adds a bit of a shimmer to their coat, which is one reason they are so popular.

This breed only comes with emerald-green eyes. Typically, they are calm and quiet cats. They can be shy with strangers, but they are also quite affectionate when they want to be.

This cat is a bit more common in the U.S., though they still aren’t as common as some of the other breeds. With their large ears, they are an unusual-looking feline as well. Their coats are a bit curly, though their fur is also quite short. They are more unusual than most breeds on this list.

Sometimes, these cats are a bit hairless in some areas, which is normal. They are outgoing cats that are also active. They’re perfect for families looking for a cat to play with—not necessarily to cuddle. Most people describe them as dog-like.

This breed is related to the Siamese. Usually, white is their most common color, but they also come in grey colorations. They have a wedge-shaped face and gigantic ears, similar to a Siamese. They are also highly vocal like their cousins, with a high intelligence level and outgoing personality.

You can teach these cats to do tricks, and many will require some degree of mental stimulation. They are best in families that have plenty of time to pay attention to them, as they don’t like to be alone.

These huge cats are known for their long, thick coats. They have a double-coat, which was necessary to keep them cool in Norway. They have tufts of hair at the ends of their ears, making them resemble Lynx. These cats are a bit rarer, but they are absolutely possible to find after a short search.

Many are affectionate with their people, though they aren’t people-dependent. They are fine with being alone but will enjoy your company when you are home.

This exciting cat breed always comes in a blueish-grey color. Originally from Germany, their name means “creature of the mist” in German, which is likely based on their coat coloration. They have long coats that are particularly fluffy around their neck and tail. They’re a quieter breed that is known for being calm.

Occasionally, they can be a bit shy. They do best in households with adults and older children.

You can’t have a list of grey cat breeds without the Persian. While this breed comes in many different colors, they are also available in grey-blue. These cats have squished faces, similarly to a pug, which also gives them some health problems. They are not the healthiest animals.

They are pretty athletic and can get large in some cases. These sweet cats were made for families and make suitable lap cats. They aren’t exceptionally playful or active. They do require a moderate amount of grooming, though.

The Sphynx is a hairless breed, but they do show colors on their skin. They are lean cats with huge ears. Many people describe them as dog-like. They are highly active and vocal. They will be loud, so be prepared if you adopt one. They are not a quiet lap cat.

These cats are often people-dependent. They do not like being left alone and are prone to isolation anxiety.

While they don’t have fur, they do need regular grooming and bathing. Their skin needs are specific and unusual for a feline.

The Scottish Fold is a very unusual feline with “folded ears,” hence their name. They come in both long and short hair versions. Usually, they are medium-sized cats with enormous eyes.

While these cats aren’t people-dependent, they are very attached to their attention. They tend to be quite vocal and can be pretty noisy. They can make great companions in many cases.