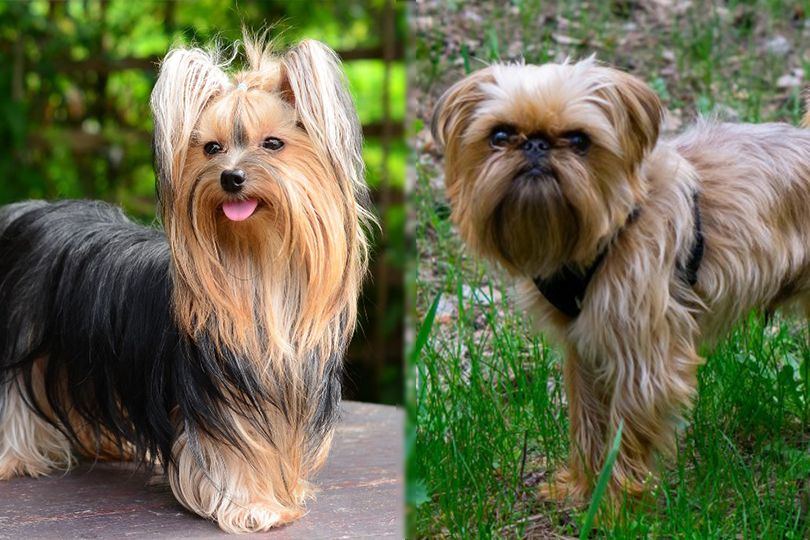 The Griffonshire is a mixed or cross breed dog with two different purebred parents, the Yorkshire Terrier and the Brussels Griffon. He lives 12 to 15 years and has talents in agility. This is definitely a very smart and sassy little dog who will be better with a single or couple owner that do not have other pets or children!

Where does the Griffonshire come from?

The Griffonshire is a more recent example of a designer dog, which are mixed dogs that have been bred purposely. They have been around for about 60 years but have become more popular over the last 20 years. Not much is known about a lot of them in terms of origins and the Griffonshire is no different. Most have two purebred parents and names that blend the parent names together somehow. There are a couple of things people looking at designer dogs need to keep in mind. Firstly that not all are bred equally, there are puppy mills and bad breeders selling designer dogs with no thought or care for the animals at all. And secondly with this kind of first generation breeding there are no guarantees, puppies in the same litter even can vary in looks and temperament. Here is a look at the Griffonshire’s parents.

Today the Yorkie as they are often referred to is a confident and clever small dog with quite an intrepid spirit. They can have a range of personalities, some are more cuddly, some are more active, some are mischievous. One thing most Yorkies have in common though is if you spoil them too much they can be difficult.

The Griffonshire is an intelligent and lively dog with a bit of sass in some, and a sweet nature. He is alert and energetic, loving and loyal and very cheerful and happy. He is a gentle dog usually and his energy comes in bursts. He can have a more willful side to him so he will need some firm handling. He is very sensitive and does not like to be left alone for long periods. He is wary of strangers.

This is a small dog weighing just 7 to 10 pounds and standing 7 to 10 inches tall. It can have flappy or pointed ears and its coat can be a wider ranger of options. There is the Yorkie coat being medium to long, fine and silky, or it can be one of 2 Brussels Griffon coats, dense, rough and wiry or short, shiny and smooth! Common colors are black, blue, tan and brown.

How active does the Griffonshire need to be?

This is a dog that has bursts of energy and playfulness and is overall a somewhat active dog. While he is of a size that makes him a perfect apartment dog he will still need to go out for a couple of walks a day at least. If there is a yard he can play in that would be just a nice bonus for him. He would also love some time off leash where he can run free and safely. Consider somewhere like a dog park. It is a great space where you can also play some doggy games, and where he can socialize.

He is smart and tends to listen and obey well but he can sometimes have a stubborn side so training will likely be moderately easy. This means it will be a gradual process. House breaking though seems to go quicker for most owners. Make sure you are firm with him so he knows you are the boss and he does not develop small dog syndrome. Be consistent and positive, offer him encouragement and reward him for his successes. Treats are often a great motivator. Make sure alongside his training he also has socialization. Get him used to different people, children, animals and places. He will be a more confident and happy dog and you will be able to trust him and be more confident in him.

With the three main coat types grooming needs can vary slightly. The longer coats will need daily brushing to keep away tangles and remove debris, the shorter ones can have brushing two or three times a week. This can be a hypoallergenic dog, as the wiry coat and the Yorkies coat are both considered to be this and it is low shedding. The coat should be shampooed in a bath just when it needs it. If he has a beard this can get dirty daily when eating and will need a wipe. Longer coats will also need regular trimming at a groomers.

His teeth should be brushed daily if you can but otherwise at least two to three times a week. His nails will need clipping when they become too long, this is something a groomer can do for you if you do not know about dog nails as care does have to be taken. He should also have his ears checked by you once a week for infection and then give them just a wipe clean with an ear cleanser. There should be no inserting into the ear for any reason.

Socialization is really important for the Griffonshire. It will help him in his interactions with others. Some are fairly good with children, playful and affectionate, and some just prefer not to be around them, or are best with older ones at least. He can be wary too around animals that are not familiar and is not always good with other dogs so supervision is important too.

This can be an alert dog and so could be a good watchdog. He barks occasionally and should be fed ½ to 1 cup of a good quality dry dog food each day, split into at least two meals.

There are health concerns the Griffonshire might be more prone to as they can be passed on from the parents. They include Patellar Luxation, Eye problems, Skin allergies, Hip Dysplasia, PSS, Hypoglycemia, Collapsed Trachea and Reverse Sneezing.

Costs involved in owning a Griffonshire

The Griffonshire can cost somewhere between $300 to $950 depending on where you get it and the kind of breeder or even shelter that you get it from. He will have some initial medical needs to be paid for like shots, deworming, micro chipping, a physical exam, blood tests and neutering. He will also need a crate, carrier, leash, collar, bowls and such. These costs may amount to somewhere between $370 and $400. Annual essential medical needs, excluding illnesses or accidents, but just for things like check ups, flea prevention, shots and pet insurance come to $435 to $535. Non-medical needs each year like basic training, license, grooming, treats, food and toys come to $535 to $635.

Looking for a Griffonshire Puppy Name? Let select one from our list!

The Griffonshire is really a dog more suitable for couples and singles rather homes with children especially young ones. That said with socialization and if raised with them they can adapt and learn to get along. He can vary in how much care he needs depending on his coat but he is a joy to have around and will make someone a great pet.