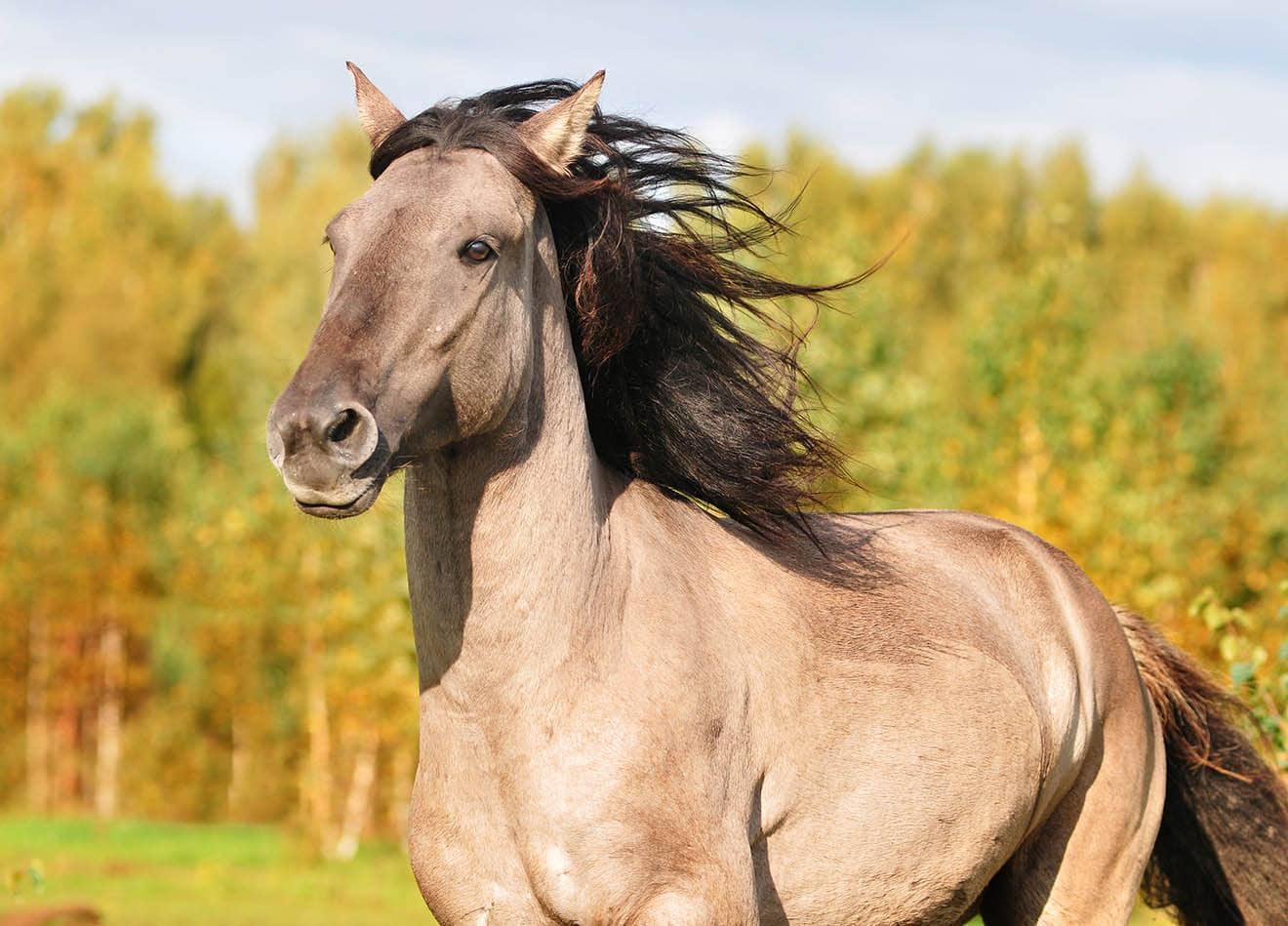 Grullo and Grulla horses have very distinct appearances. Many times, they have primitive markings like stripes, barring, or shadowing, with grey, tan, or mouse-colored hairs. You’ll often hear them called by other names, such as blue dun, mouse dun, or gray dun, but they’re all referring to the same thing. Let’s take a closer look at these horses, their appearances, and some interesting facts about them.

Grullo is pronounced like grew-yo. Grew-ya is how you would pronounce Grulla.

Now you know how to properly pronounce these words, but what do they actually mean? Are they particular breeds of horses?

Grulla and Grullo just refer to the color of the horse, and they’re both correct ways of describing it; though the AQHA recognizes Grullo as the proper term. In Spanish, Grulla means gray crane, which is similar to the color of a Grullo horse.

Horses with a Grullo or Grulla color are actually black, though the black is diluted and modified by a dun gene. To be a true Grullo, the horse must be smoke or mouse-colored.

Grullo horses also have primitive markings on their bodies, like stripes and barring. You can see these types of markings on all duns to some extent.

The tips of the ears will often be the horse’s darker base color, as well as an outline around the ear. You might also see dark horizontal bars that go across the back of the ear.

Commonly, a shoulder stripe or transverse stripe will start at the withers and run horizontally down the horse’s body.

You’ll often see neck shadowing on a Grullo, which looks like dark areas that cover much of the neck and extend to the shoulder.

Often referred to as tiger striping, leg barring appears as bars of the horse’s darker base color running up the legs.

The face of a Grullo will often be partially or entirely covered in its darker base color, which is referred to as a face mask.

This stripe runs down the backbone of the horse, starting at the withers and often reaching quite a way into the tail. These stripes can be any width, and you’ll often find transverse stripes running off the main dorsal stripe.

Mottling appears as circular patterns of the darker base color on the chest, shoulders, underbelly, forearms, shoulders, and gaskins.

Cobwebbing is lines of dark coloration that tendril off from the horse’s masking. They’re usually concentrated around the eyes and forehead and can be various lengths.

These guard hairs appear in the horse’s mane and tail. They’re white or crème-colored, spread throughout the mane, or mainly focused around the base of the neck. They show up similarly in the tail as well, with light-colored hairs either sticking near the base of the tail or spreading through it.

Grullo horses aren’t a particular breed; they’re just black horses with a dun gene that causes the black to become diluted. They often have primitive markings that give them away, and you can tell them by their gray or mouse coloration. Grullo and Grulla are two words referring to the same horses, so you can use them interchangeably, though most people pronounce them wrong since they’re Spanish words.