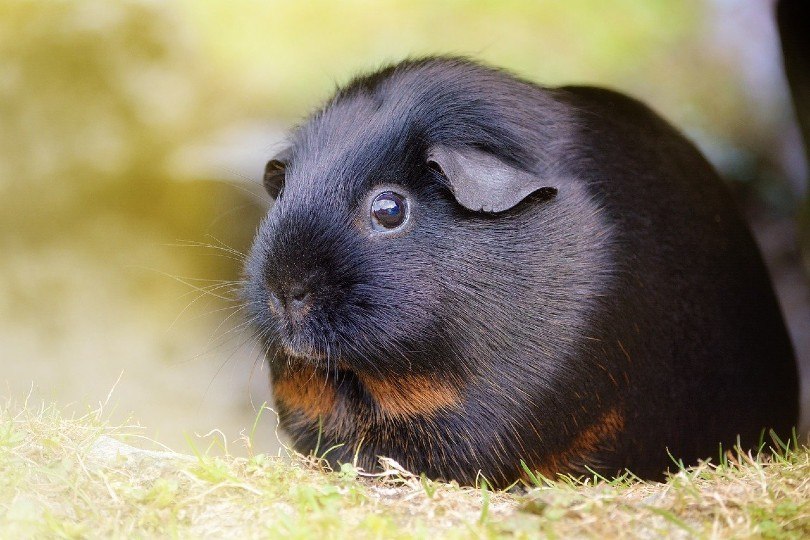 Guinea pigs are wholesome, there’s no other way to put it. Affectionate and terribly cute, it is like having a kitten that never grows up. It does not come as a surprise, therefore, that they are some of the most popular pets today. In fact, it is believed that people started domesticating piggies around 7,000 years ago.

Thanks to genetics, these munchkins come in a wide variety of coat styles and colors. Therefore, before you go out looking for a pair of these cuties, it is important that you familiarize yourself with the various guinea pig coat colors and patterns. This will help you to make a more informed decision.

The Agouti’s flecked coat is its most distinguishable trait. Its ‘ticked’ coat consists of two different colors alternating throughout the pig’s head, back, and legs. Their stomachs and the areas around their eyes, however, often consist of one color. There is also a new variant of the Agouti known as the Solid Agouti, which has the ticking pattern all over its body. However, it is quite rare.

The Agouti can come in a wide variety of colors, with the two ticking colors contrasting considerably.

Argente pigs also come with ticked coats. However, the Argente’s coat spots a different type of ticking. Unlike their cousins, the Agoutis, the Argente’s coat spots multi-colored hairs, which is what culminates in a ticking effect, thanks to each individual hair spotting two separate colors. This is in contrast to the Agouti’s coat, which consists of each hair having a separate color one to the next.

Argentes come in only a few colors, which are typically light. They range from lilac and white to beige and golden. Additionally, unlike most guinea pigs, Argentes have a distinct pink hue in their eyes, which allows you to tell them apart from other ticked breeds.

As you can tell from their name, these are guinea pigs that spot a bicolored coat. Piggies with this type of coloration usually have the two colors distributed in patches throughout their bodies. The colors can be of any kind, other than red and black, as that would make them Tortoiseshells. Bicolored piggies are quite popular.

Brindles resemble Tortoiseshells, thanks to their coloration that includes black and red. However, Brindles can have more colors, as well as random patterns, rather than organized square patches.

Ideally, the hair colors of a Brindle should be as intermixed as possible. Nonetheless, dominant black or red patches do occur from time to time. They also tend to have glossy fur, which does not always have to be smooth.

Dalmatians are named after the Dalmatian dog breed, thanks to having similar colored black and white markings. Dalmatians, however, tend to have spotless faces, with only a few animals having a white streak running down their faces.

However, experts advise against breeding Dalmatian guinea pigs, as there is a 25% chance of getting a malformed young one. This is because the Dalmatian gene is problematic if it does not come naturally or through inheritance. Breeding a Dalmatian with another variety is safer, even though there is a 50% chance that some of the pups will be non-Dalmatian.

Dutch piggies can spot a wide variety of colors and be either mono- or multi-colored. Multi-colored Dutch guinea pigs usually have a white chest and front legs and different color(s) on their rear and lower stomach. Additionally, the face of a Dutch should spot the same color as its stomach while having a white triangle around their muzzles that tapers towards the top of the head.

One of the distinguishing characteristics of a Fox guinea pig is that it has pale spots around its eyes, stomach, and chest, with a bit of white ticking on various spots across its body. Other than that, however, the Fox piggy usually has one solid color, which can be black, beige, chocolate, or lilac.

This is an albino variety of guinea pig, meaning that it is predominantly white with bright red eyes. Like Siamese cats, Himalayan guinea pigs usually have dark tips, meaning their nose, ears, and feet are dark, giving a stark contrast to their white coats.

The color of their dark points can be either black or chocolate, and it can be difficult to tell which of those shades a pup will have until it is a couple of months old. One of the criteria used to judge Himalayans during shows is the level of contrast between their white coats and dark points. Those with a sharp contrast get more points.

Roans are a variety of bicolored pigs. However, unlike other bicolored guinea pigs, Roans do not have patches; rather, they have a dominant color with white hairs peppered in. This unique pattern covers most of the body apart from the face and feet. Roans can spot a wide variety of colors and coat types.

As is the case with Dalmatians, you are advised against mating Roans with other Roans, as there is a possibility of getting a malformed pup.

Seifs are some of the most common piggies. These guinea pigs have a smooth, non-wiry coat with the same color all over. They come in up to 12 colors, with black, lilac, and chocolate being the most common.

The Tan comes in a single base color, but with tan spots. The tan markings should be around the muzzle, eyes, and belly, as is the case with Fox guinea pigs. They can also have tiny tan spots around their ears. The base color of Tan pigs is usually black, beige, and lilac.

The Tortoise and White guinea pigs are also incredibly popular, thanks to their beautiful coats consisting of red, black, and white, with the colors having neat separations between them.

Fortunately, for show purposes, there are no regulations for where the colors should appear, only that they should be neatly arranged and be roughly of the same size. There should also be no other color appearing in the coat.

These guinea pigs feature red and black patches and have bright dark eyes. They are remarkably gorgeous and are some of the most coveted piggies out there.

Regardless of the coat color and pattern, any piggy you choose is adorable. Nonetheless, if you have a thing for colors and patterns, use this guide to choose one that suits your taste.