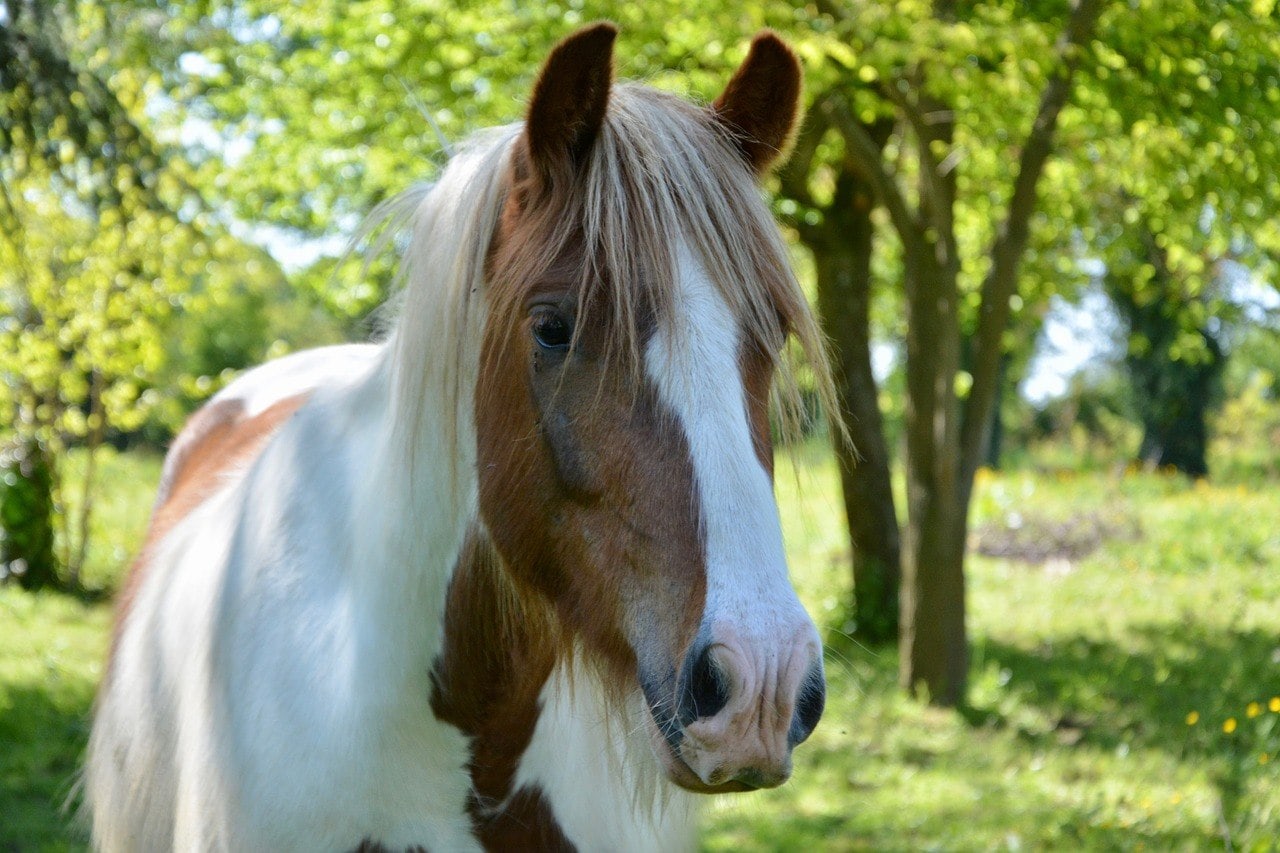 The Gypsy Vanner, also known as the Gypsy Cob or Irish Cob, is a breed of domestic horse that originates from Ireland. It has been bred for more than a Century to pull Gypsy caravans and was first exported to the US in 1996. Not only has the horse been bred to be strong and have plenty of stamina, but the smaller examples of the breed are more highly revered because they would require less food and therefore cost less money to keep than the larger horses. They are known for their athleticism but also for their calm and friendly nature.

The Gypsy Vanner originates from the UK and Ireland. In particular, it has been bred to pull Gypsy caravans in Ireland. Traveling gypsies of the British Isles started to use horses to pull their caravans in the mid-19th century and the breed was further improved and optimized during World War II. In 1996, the first of the breed was exported to the US, where it has continued to gain in popularity thanks to its combination of good looks and strength, combined with a manageable size and incredible pulling capability.

The horse was not only considered vital to the ongoing survival of the family, pulling the family’s home caravan from one location to another but was effectively treated as one of the family. The horse was kept in good condition, thanks to the extensive exercise it received and also thanks to the variety of greens that it got from eating hedgerows and shrubbery.

The horses had to live in close proximity to the family, including young children. This meant that the breed was expected to have a reliable and gentle temper so that it did not injure or otherwise scare kids.

Prior to 1996, the Gypsy Cob was considered a type of horse, rather than a specific breed, but in this year, breed associations started to form in North America, Europe, Australia, and around the world. Although the standards do vary a little from one region to another, the horse is generally considered to be between 13 and 16 hands high, its facial profile should be straight, and it should have a muscular neck, chest, and withers. Features like the feathered heels and the piebald coloring are desirable and common, but they are not required according to the breed standards.

How Much Do Gypsy Vanners Cost?

The Gypsy Vanner is an expensive horse, not only to care for but also to buy, and you can expect an average price of around $12,000. If you shop around or are willing to compromise on the standards, you may be able to find one for less than this, however, while prize examples with strong lineage may cost more. The cost and quality of this breed mean that it is unlikely that you will find one in rescues, although it is not impossible. The cost of adopting is less than buying but varies according to the shelter you use.

Renowned for its calm and sweet nature, the Gypsy Vanner is a good choice for novice and first-time riders. It has been bred to live in close proximity to its family, including young children, and the horse would have been surrounded by dogs and other animals. Although there is no guarantee, opting for a Gypsy Vanner breed does increase the likelihood that you are getting a sweet-natured and loving horse.

Standards do vary a little from one country and one breed association to the next, but some standards are uniform.

It is generally accepted that this breed will stand between 13 and 16.2 hands high (hh). The shorter horses are generally considered more desirable. They are as stocky and strong as the larger horses, but because they are smaller, they do not require as much food, so are considered to be more economically viable. A larger horse will cost considerably more, especially since the Vanner usually has complex dietary requirements that are beyond the standard for horses, in general.

There is no single color or pattern for the Gypsy Vanner breed. They can be patterned or have solid color coats. However, the piebald and skewbald patterns are common in this breed. In particular, you will see:

The breed is not considered a colored breed, however, so breed registries will accept them with any color and with any marking or pattern.

Again, there are few features or physical characteristics that are considered essential to the breed. However, it is common to see feathering on the lower legs. The Vanner also tends to have considerable hair around the mane and tail, and this long hair does require extra care.

How to Take Care of Gypsy Vanners

The Gypsy Vanner is a hardy animal and if you look after it, it will care for you and your family. It is strong, tough, and resilient, and is hardy to wet and cold conditions. However, owning one of this breed isn’t without its challenges. Namely, it has long hair that needs regular grooming, and it can be prone to some illnesses and conditions.

The Gypsy Vanner comes from Ireland. The area is known for being wet and somewhat inclement. Temperatures can drop below freezing, and this breed can do well living outdoors, although it will benefit from having shelter against the cold and wet of winter.

The Vanner can struggle in hot climates, considering Ireland has a mean annual temperature of 50°F and only an average July temperature of 62°F. In some of the mountainous areas around Dublin, Ireland sees more than 254 cm of rainfall a year, too. If you will be keeping your Vanner in hot temperatures, ensure that they have somewhere to escape the sun.

The Vanner requires a significant amount of grooming to ensure that it remains healthy and comfortable. In particular, it has a long tail and mane, which require extra attention. This is especially true if you live in a muddy area because the mud can get caught up in the hair and cause problems.

You can braid the mane and tail to minimize the impact of mud and to prevent knotting. The feathers around the bottom of the Vanner’s tail will need regular detangling and brushing. This will also help you find any cuts or scratches.

Do Gypsy Vanners Get Along with Other Pets?

One of the reasons for the increasing popularity of the Gypsy Vanner is its calm and peaceful nature. Not only was the horse bred to get along with and remain calm around children, but Gypsies would have kept dogs and other animals. The Vanner will get along with other pets, can be kept with other horses, and is considered a stable and pleasant addition to any family group.

What to Feed Your Gypsy Vanner

The Gypsy Vanner has a somewhat unique diet. Its metabolism is slower than other, similarly-sized horses. This means that the breed is prone to quickly gaining weight, so you should adopt a high-fat, low-sugar diet.

Feed good quality hay and supplement this with a ration balancer and not a feed concentrate. If left in a lush field, you may need to fit a grazing muzzle to prevent your Vanner from eating too much of the grass.

Regular grooming and a good diet will help ensure that this hardy breed remains in good condition, but there are a few conditions that you need to pay special attention to:

Are Gypsy Vanners Suitable for You?

The Gypsy Vanner is widely regarded as being a friendly and well-balanced horse breed that is great for novice owners and even first-time riders, although it is more commonly used to pull carts and caravans. It is a stocky but reasonably short horse, is hardy to cold and wet weather, and can be kept around children and other animals without fear of causing injury to them.

The breed is very well thought of, but it is expensive to buy, has specific dietary requirements, and also takes a lot of grooming care to ensure that it remains healthy. Therefore, this breed is suitable if you have the money and time to invest in owning one, and are looking for a hardworking horse that will get along with all family members.

You may also want to check out these other horse breeds: