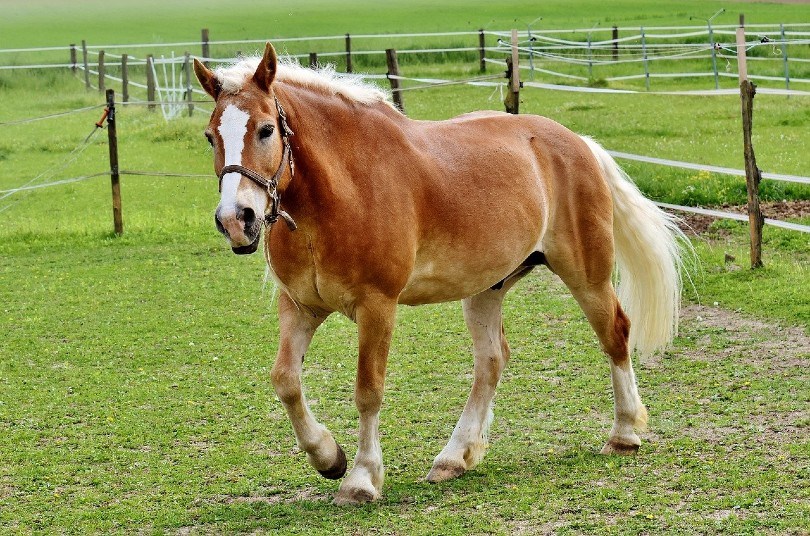 The Haflinger horse is a small, palomino-colored Austrian horse that breeders created during the 19th century. It’s safe, dependable, and intelligent, with plenty of stamina. Owners often use it for traversing thin trails or as a packhorse. It has an easy-going personality and a hard-working attitude. We’ll take a closer look at this smaller-sized horse to learn more about it to see if it’s right for you.

Quick Facts about the Haflinger Horse

Haflinger horses are hardy and capable of living comfortably in almost any climate. This is a popular breed in Europe and America, and its numbers continue to increase even when the overall horse population is falling. The Haflinger became the first cloned horse in 2003, and the resultant foal is named Prometea. The World Haflinger Breeding and Sports Federation looks over the breed, sets the standard, and holds competitions. All Halflinger horses can trace their lineage to one of seven bloodlines, though the modern version is a mix of several horses, including the Arabian. German and Austrian armed forces use this breed for working in rough terrain due to their muscular bodies, short stature, intelligence, and sure-footedness.

How Much Do Haflinger Horses Cost?

You can expect to pay at least $3,000 for your Haflinger, depending on how close to a breeder you live and how much training you want the horse to have before you take control of it. If you need help breaking in the horse and preparing it for riding, your costs can go up to $10,000 or more.

Besides the cost of the horse itself, you will also need regular veterinary visits, and hay for them to eat during the winter months that will also increase the overall price.

Haflinger horses are kind and gentle animals that are a versatile addition to any stable. A Haflinger is normally tolerant of any rider that weighs as much as 25% of its own weight. It’s intelligent, likes to please, and can learn new tricks and accomplish complex tasks. However, its intelligence can also cause it to be stubborn in many situations, especially if it doesn’t feel like working or riding, so it’s better if you have some experience dealing with stubborn horses. It can also become too loveable and begin to pull at your hair and dig in your pockets when it wants a treat. This behavior may sound harmless, but these horses are quite strong and can easily knock over a child or smaller adult.

The Hafling will have a chestnut color, but this color is available in several shades. The mane and tail will have a lighter shade and will be white or flaxen. It has a compact head with well-defined muscles that accent the face. It has a medium-sized neck with pronounced withers, sloping shoulders, and a deep chest. The body is well-muscled, and it’s strong enough to pull carts despite its small size.

The A-line horse is one of the most prevalent of all types. A stud named Anselmo, who was born in 1926, started the breed when he turned 21.

The B-lie began with a stud named Bolzano, who was born in 1915. It’s not as popular as the A-line, but you can find them in Austria, and their number is increasing in America and England.

The M-line began by a stud named Massimo, who was born in 1927. This breed is popular in Austria but is rare in other parts of the world.

A stud named Nibbio started the N-line breed, and like the A-line, you can find it worldwide. It’s especially popular in Austria and Italy.

A stud named Stelvio created the S-line, and it’s one of the rarer of the seven bloodlines, though you can find it in America. It was threatened with extinction before Austrian breeders began to bring it back.

Student is the name of the stud that created the ST-line. Though there are many of these horses, they are all confined to Austria, and it’s rare to see them elsewhere.

The W-line is a breed created by a horse called Willy. It’s one of the few lines not popular in Austria, and there are larger numbers in other countries, including the Netherlands, Canada, and the United States.

How to Take Care of a Haflinger Horse

Most experts recommend a circular pen about 60 feet in diameter for riding and training your house. However, since your Haflinger horse is smaller than many other breeds, a 50-foot circular pet should be sufficient. Many experts recommend moveable walls so you can change the shape and size of your pet as the situation demands.

You will also need to provide your horse with access to a stable or shelter to get out of bad weather. This shelter does not need to be too large, and many owners use a three-sided enclosure that is about 12’ W x 12’ L. It will need to be a little taller than the horse, so there is no injury danger. Six feet should be more than enough clearance for the Halflinger. This shelter will need to be well-stocked with hay for them to eat and for comfort.

Do Haflinger Horses Get Along with Other Pets?

The Haflinger horse is friendly toward other horses and animals it sees on the farm. Most house pets don’t bother with these much larger animals, but some dog breeds may try to herd them and may nip at the horse until it gets in line. If you notice the horse getting angry, you will need to take steps to separate them.

What to Feed Your Haflinger Horse

Horses are herbivores that enjoy grazing on the grass. If you have a large field with different types of plants, you won’t need to worry about feeding them much during the summer months, but you will need to supply them with hay that they can eat in the winter. Horses also like to eat vegetables, and fruit like apples makes a great treat that can help motivate your Haflinger if it’s stubborn.

Haflinger horses love to run, and the best way to keep them healthy is by allowing them several hours each day to run around their pen or explore a nearby field. Horses that don’t see enough activity can lose muscle and gain weight, leading to several health problems that can shorten its life. Besides activity, a good diet and shelter from the cold should be all that is required for long life.

If you are looking to get a Haflinger horse to breed, experts recommend getting a stallion. When you have a stallion, the mares will come to you and pay you for your time. If you have a mare, you will need to set up transportation. You will also need to understand genetics and be skilled in prenatal care and giving birth.

Are Haflinger Horses Suitable for You?

The Haflinger makes a great addition to any stable. It’s a perfect horse for children because of its small size, and it can also carry most adults up to about 225 pounds. Its smaller size will also require less space and less food. Haflingers can be stubborn at times, but they are smart enough to accomplish several tasks and friendly enough to be a great companion.

We hope you have enjoyed reading over our look into this miniature horse and learned some interesting facts. If we have convinced you to get one for your stables, please share this guide to the Haflinger horse on Facebook and Twitter.