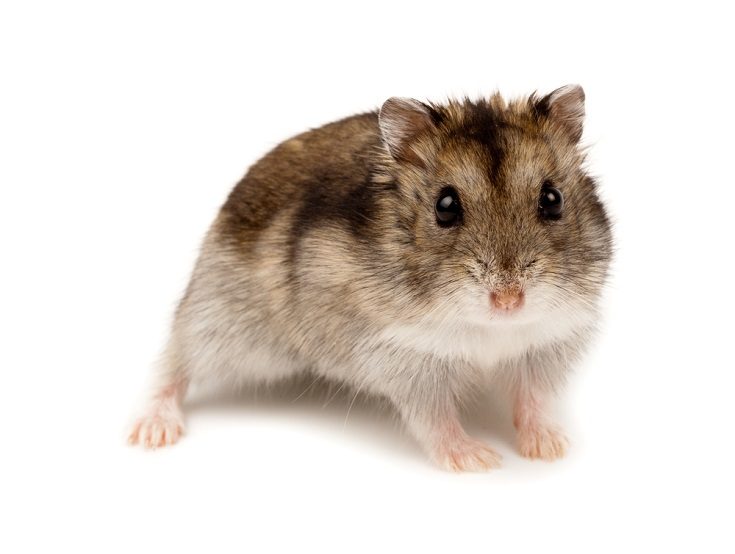 Hamsters are some of the most adorable creatures on planet earth. They’ve got the cutest little paws, puffy cheeks, and the most innocent facial expressions wrapped up in one tiny furry package.

And they can come in so many different colors that there’s an ideal hamster out there for everyone!

Let’s take a look at some of the available coat varieties when choosing your next hamster.

Hamsters aren’t necessarily covered from head to toe in one color. They’ll just primarily show one particular color; however, there may be patterns or splotches of other hues. While you may think that these are primarily dominant gene colorways, you’d be mistaken as only one of these colors is a dominant dependent.

This is the most dominant color for a hamster. It’s also the standard hamster color most commonly found in nature. Goldens will have golden brown fur with black cheek markings. They typically have a grey undercoat with an ivory belly topped off with grey ears. Since this is the dominant gene colorway for hamsters, you’ll always get golden hamsters if you don’t mate two hamsters that share recessive genes or particular combinations.

Beige hamsters are lighter in color than goldens and can be considered a rare color. That’s because beige hamsters only appear by breeding together a rust-colored hamster with a dark grey gene hamster. Both of these two parent colors are recessive genes and rare themselves. Beige hamsters are often the runts of their litter and may have a kinked tail.

Light brown hamsters are a distinct brown color with very few patches of lighter fur—if any. This color is the result of two recessive brown parent genes. However, they still keep their pinkish and feet making for one cute hamster.

Black is a recessive gene color that tends to turn dark brown (chocolate) as they age. There’s a common pet store belief that states that black hamsters are much tamer than other hamsters. However, that’s a complete myth. Black hamsters can be just as manic as any other color.

These hamsters have a creamy light tan coat with ivory-colored bellies. The roots of their back fur are typically light grey with cinnamon coloring mixed in. In fact, the standard blonde is actually bred by combining a light grey parent with a cinnamon one. Blonde hamsters may have red eyes.

These little furballs are a dark brown color all over; however, they may have streaks of rust or cinnamon color running through them. Like the brown variety, they still keep their pin hands and feet giving a most beautiful color contrast.

Cream may seem like a basic colorway. Its appearance resembles a light coffee roast with a quick splash of milk. However, it’s very unique genetically. Although it’s a recessive gene, it will actually dominate over a recessive black gene and hide the parentage of the black hamster parent.

This is a very unique color as it requires a strange parentage. Dove-colored hamsters are born to black and cinnamon parents. On paper (and in Punnett squares), a dove hamster is the red-eyed version of the black hamster. However, through the cinnamon gene, the hamster appears to be a light greyish color.

Grey hamsters can come in several different shades from light to silver to dark. What makes these colors so special is that they are dominant amongst all other color patterns—minus golden. However, the light grey gene can be lethal as 25% of light grey pups die within the mother’s uterus.

These hamsters are incredibly beautiful and very desired. They have a light grey coat with pinkish notes. The only way to get lilac hamsters is to breed a cinnamon gene with a dark grey gene hamster. Also, lilac hamsters tend to brown over as they age making for one very unique coat over time.

Sable hamsters have a special look about them, but it might be difficult to place your finger on just what it is. Their undercoat is a different color than their outer one. Their undercoat is a cream color while the outer layer is brown or chocolatey. And the cream coat is visible around the eyes of the hamster creating typical eye-rings.

These hamsters are the red-eyed variety of a sable hamster. Often, these hamsters have a rust or cinnamon color to them. However, they still have the same cream undercoat that shows through—particularly around the eyes.

Rust hamsters are one of the newer hamster colors. It was first observed in 1960 England, where the color was first reported as a mutation to brown or cinnamon. Unlike most mutations though, the rust mutation allows the hamster to retain black eyes and not red.

These hamsters can be exceedingly difficult to come across as many of the genetic combinations that produce this color scheme also generate deformities. There are three different types of white hamster: flesh eared, dark eared, and black-eyed. Both flesh eared and dark eared varieties have red eyes. However, they have different color ears. Black-eyed white hamsters have black eyes with flesh-colored ears.

Hamsters can also have coats with many different patterns on them—some of which have their very own classification.

Banded hamsters typically have a single horizontal band running from one across their backs from belly-to-belly. This is normally a white band; however, other light colors such as cream have been observed.

Dominant spot patterning is a dominant gene. These hamsters have an ideally white—although other lighter colors are possible—body with colored spots. These spots can be of different colors and can extend into the ears. It is advisable not to mate two dominant spot gene hamsters due to the 25% chance of death within the womb.

Roan hamsters only occur in cream-based colors. This is when white fur is mixed into the base color with the hamster’s head being darker than the rest of the body. While this is a dominant gene, you need to be very cautious when breeding them. Breeding two roan hamsters together produces eyeless white babies and stillborn young.

This recessive trait hamster is white-colored except for its head and rear. These hamsters can have any other color as their alternative hue. However, brown is the most common.

Cinnamon hamsters are the basic red-eyed color and the basis from which many other hamster colors and patterns originate. They have a very rich orange color that is mottled by their grey undercoat and light-colored ears.

Coats of Many Colors

As you can see, there are tons of different color combinations your hamster can come in! But just because they don’t have the same coat doesn’t mean that one is more lovable than another.

For more on hamsters check out these helpful posts: