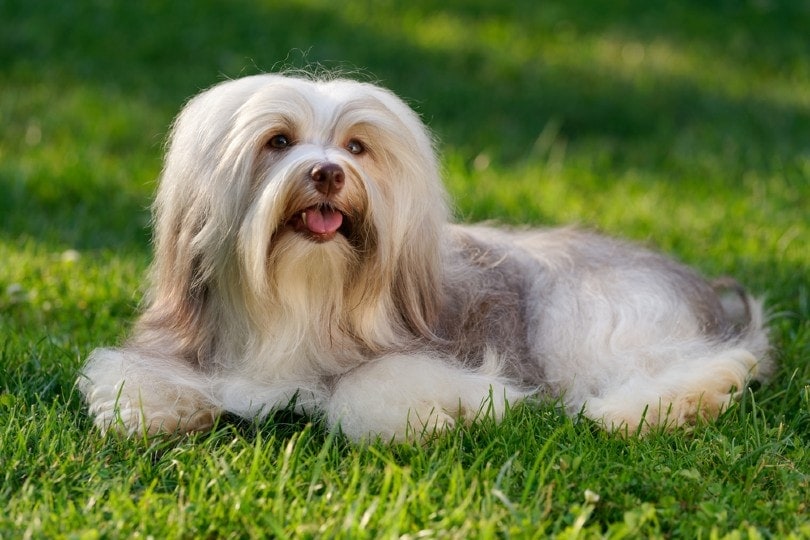 Originally from Cuba, the Havanese is an AKC-recognized purebred, and one of the top 25 most popular dogs in the US. This active, intelligent, and loving dog is often crossed with other breeds to create a wide range of lovable hybrids. Although this list is hardly exhaustive, have a look at our favorite Havanese mixes. Who knows, maybe one of these delightful pups may soon become a part of your family!

Since the Shih Tzu and Havanese pups are often confused, it makes sense that they would find in each other a perfect pairing of the Havashu. Its coat is usually a combination of tan, black, grey, brown, and gold with long and silky hair. These pups are very energetic and do well with children. They’re pretty content most of the time (as long as you give them attention!). While they can’t do much damage to other larger pets (they’re only about 8 to 12 inches tall and 8 to 15 pounds), they also cooperate well with other smaller animals. Exercise these pups a lot, otherwise, they’ll be wearing you out!

Okay, these cute pups are not literally from Endor. But don’t they bear a striking resemblance to the Ewoks there? The other name for this popular combination is the Havapom since it is a cross between Havanese and Pomeranian. Some of these dogs could fit in your purse, weighing in at only 5-10 pounds and sometimes only 7 inches tall, though they can be up to 11 inches. It may take after its Pomeranian parent in which case you will need to do a decent amount of brushing (twice a day) due to shedding. If it doesn’t take after the furball as much as the Havanese then you might not have as big of a problem. The Ewokian does not necessarily need to be taken to a dog park every day- for the most part, wyou can run him around indoors. Even though they are great for apartment living in this regard, you should get him some fresh air!

If you thought the Ewokian was tiny, just wait till you check out the Cheenese. This is a crossbreed between the Havanese and the purse dog par excellence, weighing in at as small as 4 pounds and up to 16 pounds. The large weight differential is reflective of the fact that the Cheenese can take after either parent. If taking after the chihuahua it will be smaller, but if after the Havanese, larger. Prone to yipping, this ankle-biter is not the best choice for children. They can be quite sensitive and demand a decent amount of attention, but they will pay you back in loyalty.

White, gray, brown, silver, and black are the colors that usually make up its coat. If your Schnese pup takes after its Miniature Schnauzer parent, then it will have those adorable bushy eyebrows. The Schnese weighs about 8 – 15 pounds and anywhere from 9 – 14 inches tall. Even though it is on the smaller end like most of the other Havanese mixes, this buzzing little pup will need a lot of playtime outside. They are not content being indoors and chasing toys. You’ll need to take them in the yard or a dog park to chase a ball at long distances. But this does not mean that they are unsuitable for apartment living. If they go stir-crazy, they’ll usually let you know by barking but not by destroying the place.

This is a relatively new crossbreed of the Havanese and Poodle. The Poodle can weigh anywhere between 45 and 70 pounds, that’s at least 30 pounds more than an average Havanese dog. But the combination of the two makes the Poovanese (also called Hava-Poo) weigh a lot more than other Havanese mixes- 15 pounds at the lower Havanese end and up to 45 if taking after its Poodle parent. She stands at about 15 inches tall full-grown. Since the Poovanese is half Poodle, she is naturally hypoallergenic. Her coat is usually a combination of black, gray, brown, and golden, and it only needs to be brushed a couple of times a week due to little shedding. This pup is as cool as a cucumber. She is easy to train and also very protective of those in her inner circle. She will bring fun and excitement into any family.

When it comes to training this pup, it’s not for the faint of heart. It will require a decent amount of patience. She’s probably not the best for first-time owners. If you’re in it for the long haul, then she can become a great companion, but she is a Velcro dog! She’ll want to be in your lap or near you almost all the time. Her coat is a mixture of black, cream, brown, golden, and other similar colors. One of the things that makes her so adorable is her long shaggy coat, but it can become a hassle if you’re not wanting to brush it every day. It will need daily brushing if not twice daily. She can live in an apartment and be mostly content as long as you give her daily walks.

Have a peek at this Havapeke! One of the tougher cookies among the Havanese mixes, he tends to be more introverted, preferring only his family and other pets to which he is already accustomed. Training can be difficult, especially for first-time owners. But what he lacks in high energy and friendliness, he makes up for in loyalty and affection for his owners. This breed has a flatter face, and its nostrils and breathing are affected by this. This can make high-intensity exercise difficult. It is recommended to do moderate to low-intensity exercise with him, and only for brief periods. They typically only weigh between 7 and 13 pounds and stand only a foot tall. He’s a good option for those with allergies since he’s hypoallergenic, but his coat needs daily brushing.

The Jack Russell terrier, named after the Anglican cleric Rev. John Russell, who was also a dog breeder, was originally bred for the hunting of foxes. What began as a matter of utility has now turned into a matter of cuteness appeal. Its thick and long fur comes from the Havanese, but the density and shortness of the overall coat come from the Jack Russell terrier. They weigh in anywhere from 10 to 18 pounds, and measure at about 8 – 13 inches in height. They are typically good with children since both of their parents are. However, the wily nature of the Jack Russell can prove somewhat difficult, especially when it comes to training.

Many who do not find Pugs cute will be pleasantly surprised with this unlikely combination. The Pug which originated during Ming Dynasty China was brought to the Western World in the 16th century. This even-tempered and friendly companion pairs nicely with the Havanese. They weigh anywhere from 8 to 12 pounds and are about 7 to 12 inches tall. They do well with owners who take charge, otherwise, they can get a tad unruly! They are fun but watch out!

The Alaskan Klee Kai was developed in the late 20th century as a miniature version of the larger Alaskan Husky. Coming in anywhere between 10 to 16 inches in height and weighing anywhere between 9 to 15 pounds, this pup on its own is perfect for those who love huskies but like smaller dogs. Combine this Alaskan Klee Kai with a Havanese and you’ve got yourself a pup who loves to play but will sit in your lap contentedly. They do well in small spaces, but they do need to socialize, especially with humans. They tend to do okay with other dogs as well.

As you can see, the Havanese can be mixed with compatible breeds to create some beautiful small to mid-sized dogs. With a variety of temperaments and traits, any one of these pups could find a forever home with the right family.