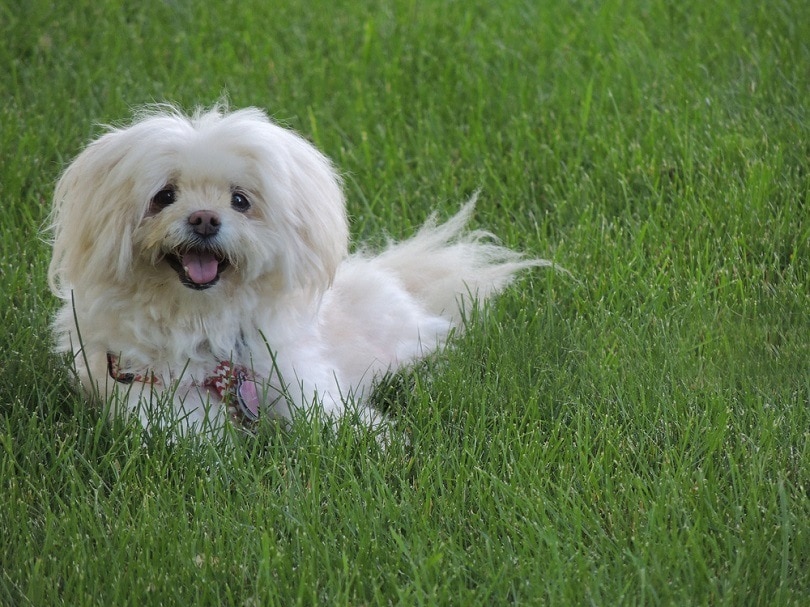 The Havaton is a small cross breed also called a hybrid dog the result of breeding a Havanese and a Coton de Tulear together. He takes part in competitive obedience and agility events in dog shows, likes learning tricks and can live for 10 to 14 years.

Where does the Havaton come from?

The Havaton is part of many mixed breed dogs that have appeared in the last two decades or so, part of the so called designer dog movement. It has become trendy to own a dog mixing two usually, but sometimes more purebreds. Sometimes these are mixes that have not been seen before and this can make for some interesting results, and some scarey ones too. Mixed breeding is not something that is really that new – purebreds we have today are the result of mixing dogs many years ago. The problem with this fad is what it means for all those dogs being bred by disreputable breeders and puppy mills who are out just to make money off a trend and have no care for their dogs. Also keep in mind you might see two breeds being mixed and think oh that would make a great dog, and if the two best traits are what result this might be true. However being so recent there is no control or design to most of these dogs so what happened with the offspring is completely pot luck. There can be quite marked differences between puppies that are from the same litter. With most not having much information known about them we can look at the parent breeds to get a feel for them.

When Cuba was claimed by Columbas for Spain in 1492 settlers from Spain began to arrive. They brought with them small dogs who then bred with the dogs on the island. The resulting breed developed into the Havanese. These small companion dogs had a silky and thick coat to protect them from the hit sun and they became very popular by the early 1800s with the rich in Cuba and then with the rich and noble in Europe. However their popularity faded and by the late 1800s they had disappeared from Europe and were even rare in Cuba. When Cubans fled into America after the 1959 revolution some brought what remained of the Havanese, and over the years it has slowly been reestablished.

Now the Havanese is a breed known to need lots of attention and companionship so does not do well when left alone. He is affectionate and has a very gentle nature. He is intelligent and trainable and will spend his time happy in your lap or entertaining you with his antics. He does not bark much and can live in an apartment or a larger home but he does need more exercise than most small dogs. He can be a rascal when he gets hold of any paper though, so protect your toilet paper from him if you do not want it shredded everywhere!

Of the southeast coast of Africa is the island of Madagascar and it is a place of many interesting animals one of them being the Coton de Tulear, who is part of the Bichon dog family and arrived on the island a few hundred years ago. How they got there is somewhat a guess though many claim they were survivors of a shipwreck! On the island there was a mix of being taken in by Madagascar royalty and surviving on the streets. In the 1970s a Frenchman who was visiting too some back home with him and got them established as a recognized breed.

Today this dog can be found around the world as well as still on the island. He is a sweet dog with a happy and playful nature. He loves hanging out with his family and owners, he is devoted to them and those strong bonds mean he does not do well when left alone. He is intelligent and easy to train. He loves getting attention and will clown around to get more of it. He isn’t much of a barker and loves it when visitors come over.

The Havaton is an affectionate, caring, playful dog who is also smart but with the occasional stubborn streak. He is super loyal to those he loves, will lap up all affection and attention expressed towards him, and then want more. He can also be super playful, warm to everyone and full of joy and happiness which is infectious to have in the house!

The Havaton is a small dog weighing 7 to 13 pounds and measuring up to 12 inches tall. He has black eyes that are almond shaped, a muzzle that goes up a little, a medium length tail and drooping ears covered in long hairs. His coat is long and silky or soft and fluffy and common colors are cream, brown, white, black, salt and pepper and gray.

How active does the Havaton need to be?

He needs to be slightly active, he does not have a lot needs in terms of exercise but should still be given a daily short walk and have some play time. They can live in an apartment without access to a yard, though having one would be a bonus. Play games with him inside or outside, take him to the dog park sometimes too.

He is fairly easy to train as he is intelligent, eager to please and enjoys the attention when it is kept positive. However he does have a stubborn side and needs his trainer to be firm, consistent but fair. Early socialization and training are important to ensure you get the best dog he can be.

He will have moderate grooming needs, he does shed moderately and then more when seasonal shedding hits. You will have to vacuum up after him and be prepared for your clothes to have hairs on them too. He will need daily brushing and a bath once or twice a month. Use a dog shampoo to avoid affecting his natural oils in his skin. He will also need his ears checked once a week and wiped with a cotton ball or cloth damp with water or an ear cleaning solution. When it comes to trimming dog nails take care as you cannot cut too low. If you do not know how to do it ask your groomer or vet to show you or have it done for you. In the pads of his feet there is often hair that will grow that will also need trimming. His teeth should be cleaned at least two to three times a week.

He is very good with children, dogs and other animals. He is playful with kids, affectionate towards them and gentle with smaller children. Early socialization and training is a great way to bring out those traits to their full extent. The children should also be taught how to play with them safely.

He barks occasionally and is adaptable to apartment life. He is better in warm to hot climates than in cold ones. He will need to be fed ½ to 1 cup of high quality dry dog food each day, split into two meals.

In general he is a healthy dog but since he is fairly new not much can be said about whether he is more prone to certain conditions in the long term. With any dog there is the chance of having the same health problems the parents have, which means with a mixed breed that is two sets of health issues from two purebreds to consider. For the Havaton these are Chondrodysplasia, Legg-Perthes Disease, eye problems, deafness, patellar luxation, heart problems and Joint dysplasia.

Costs involved in owning a Havaton

Puppies of this mixed breed sell for $500 to $900 at the moment. Where you buy from, what your expectations are, and how popular the breed is at the time of purchase can all affect the price. Along with getting him tested for certain hereditary conditions he will need a micro chip, deworming, shots and neutering. He will also need a collar, crate, leash and carrier bag. These initial costs will be around $360 to $400. Each year you will have to cover costs of owning a dog like food, treats, toys, a license, long hair grooming and training for between $525 to $600. You will also have medical costs for pet insurance, flea prevention, health check ups and vaccinations for $435 to $500.

Looking for a Havaton Puppy Name? Let select one from our list!

This is a great family dog or companion for somebody ready to give him a lot of attention and grooming time. He is suitable for people who can still be a little active but does not need as much exercise as some other dogs. He will be a big shedder, more so if he leans towards the Coton de Tulear with his coat.