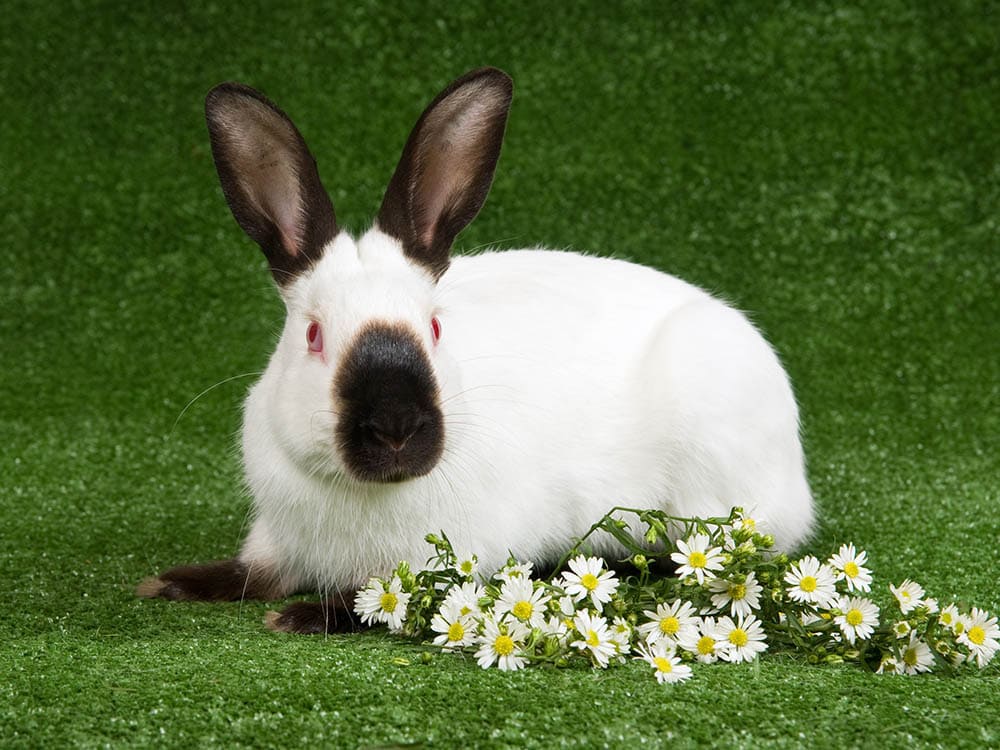 No other rabbit has gone by so many names as the Himalayan: Antwerp, Chinese, African, Egyptian, Black Nosed Rabbit, Russian, and Mock Ermine are just a sampling of its many monikers. Even with (or maybe because of) an origin obscured by mystery and misinformation, the Himalayan has long enjoyed a status as a highly desirable pet and show animal.

Boasting over 150 years of recorded history in the English language, it’s clear that this rabbit breed is here to stay—no matter what name it might have. Having survived its journey across multiple continents, it now routinely places as best of show in rabbit exhibitions and is happily kept in homes across the United States.

If you’ve ever wondered where these exotically-colored rabbits come from or what it might be like to keep them as pets, then read on! Because today, we’ll be covering everything from the curious origins of the Himalayan to its temperament and grooming requirements. Let’s get started!

Himalayan Bunnies — Before You Buy…

Despite its name referring to a mountain range that spans much of the Asian continent, this particular breed most likely hails from China. In The Practical Rabbit Keeper, a book from 1880 authored by Cuniculus, it is confirmed for the first time that “The animal comes from China, and hence is sometimes very properly called the Chinese rabbit… the Himalayan is frequently found at both sides of the mountain from which it takes its name.”

Because of the particular coloration of its fur, Himalayan pelts became a highly valuable item in trades throughout the 1800s. This led to the eventual expansion of the breed from its native home, and the corresponding profusion of names that came with each new country where it was bred.

One of the most widely spread rabbit breeds on the planet, the Himalayan made its way to the United States via trade with England in 1912. Initially popular for its unique fur, it also came to be established as a very relaxed breed, perfect for keeping as a pet. Even though more unique furs have been developed since its early adoption in the U.S., the Himalayan is still respected as a viable show breed.

As the only “cylindrical” body type recognized by the American Rabbit Breeders Association, the Himalayan is long, light, and slender. Rarely weighing more than five pounds, they make for petite pets and have a generally low-key demeanor.

Most recognizable by their trademark coloring, all Himalayans have darkly colored ears, noses, feet, and tails. Interestingly, baby Himalayan rabbits are born pure white; their dark spots develop as they age.

Being on the smaller side, Himalayans often enjoy a lifespan of around 10 years. Provide them with plenty of fresh timothy hay, clean water, and daily servings of leafy greens, and they are very unlikely to be presented with any health problems.

Though their laid-back natures make them slightly less active than many other small rabbits, Himalayans still need plenty of room to stretch, exercise, and play. Make sure that their enclosure is large enough for them to move around in comfortably, and take the time to litter train them so they can have free run of the house as well.

A Himalayan’s beautiful coat requires very little grooming, and their long flexible bodies mean that they will usually take care of it all by themselves. To give them a little assistance, it’s wise to use a rabbit-specific brush to groom them once per week. During shedding season, groom more frequently as needed.

Old and well-established rabbit breeds tend to be very relaxed and easygoing; the Himmie is no exception. Possessed of a very agreeable temperament, they make ideal pets for first-time rabbit owners, and are even quite forgiving of minor mishandling. If handled often and early after being born, they will continue to enjoy being picked up and held throughout their entire lives.

The exceptionally long history of the Himalayan is a definite testament to its enduring relevance in the world of rabbit breeds. Relaxed and easygoing, they make popular pets and often place well in professional rabbit shows. If you’re looking for a rabbit with character and staying power, definitely consider the Himalayan!