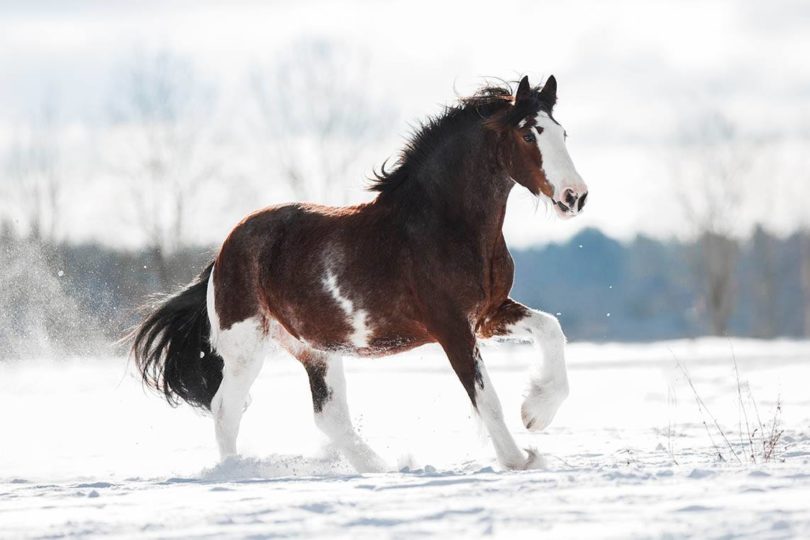 There are many horse breeds, and one of the best ways to learn more about them is to split them up into different classifications. We’ve chosen to look at the breeds that have long hair and manes with feathered feet. Join us while we look at several different breeds with these traits to learn a little more about them and see what they look like. We’ll include a picture and short paragraph of information for each horse breed we look at, so you can see if it’s something worth looking into further to see if it’s right for your stables.

Clydesdale horses are possibly the most famous horses on this list. This breed appeared in several movies, including Krull and Budweiser recently employed them in several commercials. It’s a large horse that often stands 17 hands tall (1 hand = 4 inches). It has a long mane with heavily feathered feet. Owners often use it as a draft horse because of its large size and powerful body.

The Friesian Horse is another breed with long hair and feathered feet. This breed has slightly less feathering over its feet than the Clydesdale, and though it can get as large, Friesian horses tend to average closer to 15 hands. It usually has a black coat though other colors are available. This breed is also popular in film due to its friendly temperament and intelligence. It’s the horse you see in the popular Black Beauty movie.

The Gypsy Vanner is a breed of domestic horses from Great Britain. It has a smaller frame than the horses we’ve looked at so far and rarely gets larger than 14.5 hands. It’s an attractive horse that often has a dark-colored mane and tail with white feathering over the feet. Despite its small size, owners often use it for pulling carts and other heavy lifting jobs.

The Icelandic horse is another smaller breed that rarely exceeds 13 or 14 hands. It has a powerful body and long hair to protect it from the cold temperatures of Iceland. During the winter months, the entire coat grows thick and wooly. Owners often use it as a draft horse, but you can also find them on the pacing track.

The Shire horse is another large and muscular horse with long hair that owners often use for pulling carts, though they might use it for an exhibition. It’s one of the taller breeds, and it can reach 18 hands high. It also has a hairy face, giving it the appearance of having a beard.

The Swedish Northern Horse is another hardworking horse built for cold weather. Its winter coat gets extremely thick, and its tail will widen to help protect it from freezing temperatures. It’s average height stands at about 15 hands and is often black, though other colors exist.

Height is the determining factor that separates horses from ponies. Most experts consider any horse under 14 hands to be a pony, so though the next examples are technically ponies, they are just short horses in our book.

The Dales pony is an attractive breed that first appeared in the early 1900s. It’s a muscular horse, but most owners use It for riding and for jumping in competitions and several other sports. It’s a good breed to teach horses on because of its small size and friendly temperament. Unfortunately, the United Kingdom lists this breed as being in critical condition so it might be difficult to acquire.

Fell ponies are a powerful breed that I strong enough to carry most riders.  It usually stands about 13 hands and can adjust to nearly any climate despite its long hair and feathered feet. If owners don’t use it for riding, they often use it as a packhorse to carry heavy supplies due to its impressive strength.

The list above presents the horse breeds that have long flowing manes and feathered feet. For most people, the Fell pony would make a great choice for a horse that looks attractive but can work hard. It will be less expensive than a full-size horse and much easier to find than a Dales pony. If it has to be a horse, the Clydesdale and the Friesian make excellent choices, as does the Shire.

We hope you have enjoyed reading over this list and found a few breeds you liked. If we have helped you pick your nest horse, please share these eight horse breeds with long hair and feathered feet on Facebook and Twitter.