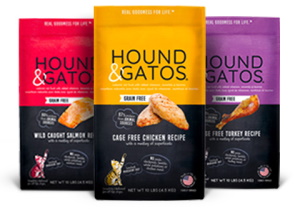 We give Hound and Gatos cat food a rating of 4.1 out of 5 stars.

Hound and Gatos cat food focuses heavily on meats. It believes that cats should eat 100% meat and strives to produce products that make this a reality. Will Post originally founded this company after he was tired of trying to find high-quality food for his feline. This was the second pet food brand that he founded. The first one was LIFE4K9, which was sold to Hi-Tek in 2010. Post Will founded Hound and Gatos that same year. In 2018, Hound and Gatos was acquired by Gott Pet Products LLC. This is a family-owned company with a few other pet food brands.

At a Glance: The Best Hound and Gatos Cat Food Reviews

Who Makes Hound and Gatos, and Where Is It Produced?

The ingredients in this food are completely sourced in the United States, except for the lamb, which is imported from New Zealand. The company does not manufacture this product itself. Instead, it works with a partner in the midwestern United States when creating its food.

This company focuses primarily on wet food. It has a tiny selection of dry food options but a much more extensive selection of wet food flavors. Its formulas all include 100% animal protein, with no plant protein at all. Quite a few of these foods include 98% or more animal products overall. This leads to them containing less than 1% carbohydrates for each food. Agar-agar is the sole carbohydrate source for many of their recipes. However, it works mostly as a fiber source, since it can’t be broken down in your feline’s body.

There are many different canned food options available. There are familiar protein flavors, such as chicken and beef. However, lamb, salmon, and “paleolithic” are also available. There is probably something for just about every feline. It is also relatively easy to vary the food formulas as necessary.

This brand has not been recalled since it was created in 2010. However, it isn’t a very old company, so this is to be expected. It does show that its manufacturing partner is safe with its processes.

This company varies its ingredients substantially from product to product. Usually, it starts with a meat source as its first ingredient. This varies depending on the formula. Some foods contain rabbit, while others contain chicken. It just depends on which one you purchase.

Often, its meat products are high-quality options. Whole meats are usually used in all the recipes.

Agar-agar is often included in the formulas. This is a derivative from seaweed, though it is a different carrageenan, which is another commonly used ingredient in cat food. It works as a gelling substance that keeps all the food together and prevents it from separating, which is vital for wet food production. It is not digested by your cat’s body, so it also works as a source of fiber. This is likely why most of the formulas often have high levels of fiber.

Salmon oil is often added, which is an excellent source of omega-3 and -6 fatty acids. These are essential for your feline’s health. They support the immune system, skin, coat, kidneys, and brain. There is quite a bit of evidence for the usefulness of fish oil in a feline’s diet, so we are happy to see it included in most of Hound and Gatos’s formulas.

Most of the formulas include few ingredients. Usually, they just have three or four main ingredients, with the rest being added nutrients that are necessary for your feline’s health and development.

Its formulas typically do not include any controversial ingredients, like those seen in many other cat foods.

How to redeem this offer

A Quick Look at Hound and Gatos Cat Food

Reviews of the 3 Best Hound and Gatos Cat Food Recipes

As the name suggests, Hound & Gatos 98% Lamb, Chicken & Salmon Grain-Free Canned Cat Food is made of mostly meat ingredients. Lamb is the first ingredient, followed by chicken. Both of these are high-quality options for cats. They provide the protein and fat that your feline needs to thrive.

In fact, this food includes quite a bit of protein and fat overall. 10.5% of the guaranteed analysis is protein, while 9.5% is fat. This is much higher than most of the other options on the market, which are far lower in protein. This food is likely so high in protein because it contains so much meat. There are not vegetable protein derivatives, making it much higher quality.

Salmon is included as the fourth ingredient. This adds both protein and fat to the overall content of the food. It also adds plenty of fish oil, which is high in omega fatty acids. This is important for your cat’s skin and coat health. It may also improve your cat’s cognitive function and protect it as they enter their senior years.

Though it is lower on the ingredient list than in most other wet foods, this food does have lamb broth added. It has a higher amount of nutrients than plain water, which is always a nice addition. We prefer broth over water, as it contains higher amounts of vitamins and minerals.

Like many of this brand’s foods, the Hound & Gatos 98% Chicken & Liver Grain-Free Canned Cat Food is mostly made of animal proteins. The first ingredient is chicken, with chicken broth and chicken liver as the next two ingredients. That is basically all this food contains. The rest is added nutrients like salmon oil and taurine, which don’t add any calories to the overall formula.

Chicken is a high-quality option for most felines. As long as your cat isn’t allergic to chicken, this food can be ideal. However, we recommend switching to other flavors often, as this will prevent your feline from becoming tired of the same flavor and help keep their diet varied. Generally, you should switch your cat’s food often, especially when they have a single animal source like this one.

Salmon oil is included further down on the list. This ensures that your feline is consuming enough omega fatty acids, which keeps their skin and coat healthy. This food also contains a wide variety of different added vitamins and minerals.

The protein content of this food is quite high. It includes 10% protein according to the package’s guaranteed analysis, as well as 9% fat.

While this food is more expensive than most, it is also more calorie-dense. You’ll need to feed your cat less overall, which may end up not costing you much more. Do the math before deciding to purchase this food for your feline.

The Hound & Gatos Grain-Free Cage-Free Chicken Recipe Dry Cat Food is one of the few dry food options available. It is made with over 87% animal protein, though a few plant sources are included as well.

The first ingredient is deboned chicken. This is a high-quality option for most felines. As long as your cat isn’t allergic to chicken, this is a suitable ingredient. It includes much of the fat and protein that your feline needs to thrive, as well as many of the necessary amino acids. The second ingredient is egg, which includes many of the vitamins and nutrients that your cat needs.

Sweet potatoes are also included. These aren’t necessarily low-quality, but they aren’t the best option for a cat. Cats are obligate carnivores, which means they should live on mostly meat. However, based on the protein content of this food, there aren’t that many sweet potatoes in it. The sweet potatoes do add a bit of protein to the food, but nothing else substantial.

This food is completely grain-free and does not include peas, lentils, chickpeas, or white potatoes. There aren’t any fillers, and plant proteins are kept to a small amount.

What Other Users Are Saying

This brand often gets good reviews. Many users enjoy the high-quality ingredients and state that their cats do quite well with them. Some cats do develop digestive symptoms due to the high number of eggs often included in these products. However, this only affects some cats. Obviously, if your feline is sensitive to eggs, you shouldn’t feed them a formula that is high in eggs.

The dry foods have higher reviews than the wet foods, despite the fact that Hounds and Gatos makes far fewer dry foods than wet foods. Some picky cats don’t seem to like this food much at all. It may be the high amount of animal products, especially if the feline is used to eating high-carbohydrate foods. But other cats absolutely love it.

It seems to depend on the specific cat. Some cats like certain flavors, while others do not. This will vary greatly depending on your cat’s taste and doesn’t necessarily speak to the quality of the food. Besides the problem with picky cats, there doesn’t seem to be any other bad reviews about this food.

Many owners were pleased that this food didn’t stink nearly as bad as other wet foods. If you’re sensitive to smells, this may be a huge plus. Some did complain about the high food price, as this food is a bit more costly than other options. It can be easily considered a “premium” food, and you should expect to pay a premium price.

This food brand is high-quality and includes mostly animal protein. It is much higher in protein and fat than most other options on the market. It features high-quality ingredients, such as whole chicken and salmon. It is a nutritionally complete food that includes many extra nutrients for your cat, including added omega fatty acids.

This food is considered to be a premium option, so it is expensive. However, Hound and Gatos food is also calorically dense, so you’ll likely need to feed your cat less than you would with other foods.