How Big Do Chameleons Get? (Size + Growth Chart) 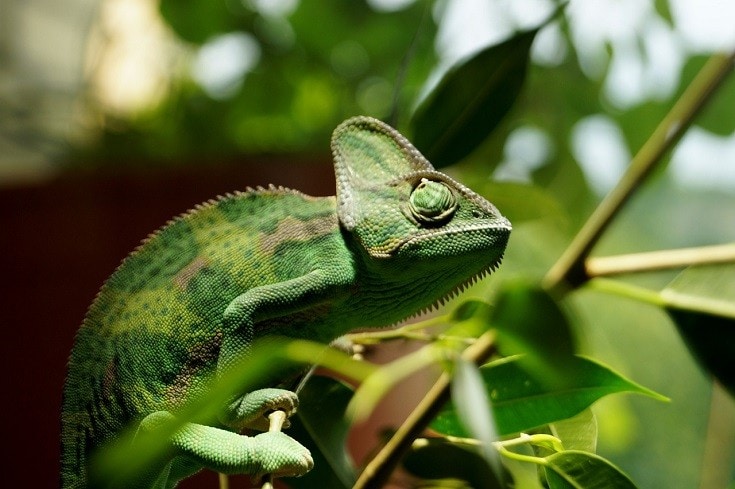 Chameleons are incredibly interesting creatures, and owning one is a true adventure. They’re always doing something fascinating, yet they’re also fairly low-maintenance, making them ideal pets for just about any animal lover.

However, the fact that most people have never owned a chameleon means that first-time owners have little idea of what to expect. As a result, you may not know whether your chameleon’s growth is normal or if there’s something to be worried about in regard to their development.

We put together a chart that will give you an idea of how big four common species of chameleon will be at different life stages. These are just guidelines, so your lizard may not fall neatly into any of the ranges, but they should be accurate for the vast majority of chameleons.

Chameleons are actually part of the iguana suborder, so they’re similar to those common lizards. Chameleons have one big difference, though: They can change their skin color.

However, contrary to popular opinion, chameleons don’t change colors to match their surroundings. They change their colors for a variety of reasons, including due to their mood, humidity, or changes in light and temperature.

The colors that they’ll change to and from will vary depending on the species involved rather than their surroundings. Even within the same species, though, different individuals will sport different colors. Their coloring may also be dependent on their personalities, as dominant chameleons tend to be brighter than more submissive lizards.

Chameleons vary widely in size, with some species (like pygmy chameleons) being quite tiny and others (like the Malagasy giant chameleon) being several feet long. Most commercially sold chameleons are less than 2 feet long, however, so don’t worry about having your home taken over by a giant, color-changing lizard.

Sadly, chameleons don’t have long lifespans, so don’t expect yours to live longer than a few years. Some species will live as long as 10 years in captivity, but it depends on the species and the care that they receive.

Veiled chameleons are one of the larger species of chameleons out there, as males can often reach 2 feet in length. This species is known for the tall casque (a helmet-like structure) on top of their heads.

Much shorter than their veiled counterparts, panther chameleons are often around 6 or 7 inches long, although females can be much smaller. They’re known for their vibrant color patterns, which vary according to the region in which the panther lives. Males tend to be more colorful than females, however.

Pygmy chameleons are tiny little lizards that will fit in the palm of your hand, and they’re also somewhat difficult to care for, so they’re best suited for experienced owners. They’re incredibly sweet-natured, though, so owning them tends to be highly rewarding.

Jackson’s chameleons are known for the three horns that the males have on their heads (the females don’t have any horns). These are medium-sized lizards and are usually bright green in color. They’re also known for having hair-trigger color changes.

When Do Chameleons Stop Growing?

For the most part, chameleons will stop getting longer by the time they’re 8 months old, but they’ll keep putting on weight until they’re 2 years old.

A small cage shouldn’t stunt a chameleon’s growth, but it can be an indicator that the lizard is being neglected, and neglect will certainly affect their size.

The biggest factors determining a chameleon’s size (beyond their species, of course) are their diet and stress level. Even assuming that you’re feeding them a healthy diet, putting them in a cage that’s too small can cause them to feel stressed and anxious. This stress can cause them to not reach their full growth potential, as well as shorten their lifespan.

The good news is that they don’t require large cages, so it should be easy to give them all the space that they need.

Chameleons are omnivores, so you’ll need to give them both plants and insects to munch on. It’s not enough to dump a couple of bugs and some veggies in their tank, however.

They need a good variety of insects, so try to give them a few different kinds as often as possible. They especially like crickets, mealworms, roaches, and waxworms.

You should try to give them gut-loaded insects as well. These bugs have been recently fed, preferably with foods that are high in the types of nutrients that chameleons need. You may also want to dust them with calcium or vitamin supplements.

As far as veggies, chameleons do best with dark, leafy greens like collard greens and ficus leaves. Wash them first to ensure that there aren’t any chemicals or pesticides left on them, and remove any uneaten plants within 24 hours so they don’t start to rot.

Owning a chameleon can be fun and rewarding, but it can also be stressful, especially if you don’t know what to expect. Hopefully, this growth chart will give you a good idea of where your lizard will be at various stages of their development, so you can be sure your chameleon is growing up strong and healthy.

As with any animal, there’s variety within individuals, so if your chameleon doesn’t fit in the above parameters, don’t panic. Just keep an eye on them, and be on the lookout for other signs that something might be wrong.