How Do Cats Communicate With Each Other? 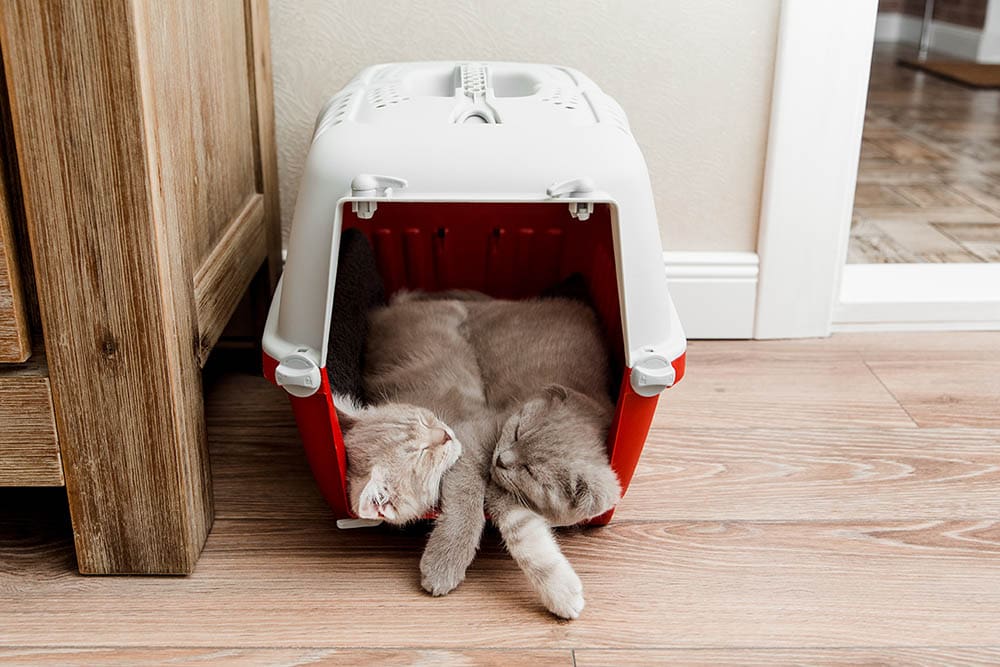 Unlike dogs, who display their feelings in exuberant, slobbering, tail-wagging ways, cats often seem determined to keep us guessing what they are thinking. When they meow at us, it could mean anything from, “Iʻm hungry!” to “Get off my couch!” Even purring, generally thought of as a sign of happiness, can also indicate that a cat is stressed or not feeling well.

For cats, the key to body language is often their tails. Cats who feel calm and safe with each other will communicate that in part by keeping their tails up, often with just the tip twitching. On the other hand, cats communicate fear, anger, or uncertainty by tucking their tails or lashing them from side to side.

Cats who feel comfortable with another cat may roll over and show their bellies as a sign of trust. Cats also indicate their approval and liking of each other by making eye contact and blinking slowly.

If a cat is more uncertain about another cat, they may move slowly, arch their back to appear bigger, or flatten down closer to the floor. Ears flattened close to their heads or legs pulled close to their bodies are an indication that a cat feels threatened enough to resort to aggressive behaviors. The other cat would be wise to remove themself from this situation!

Scent is one of the most important ways that cats communicate with each other. All cats have scent glands on their faces and heads, allowing them to leave a scent by rubbing these on objects, people, or other cats. When cats mark something with their scent, they are saying to other cats, “This is mine. Leave it alone.”

Outdoor cats, especially males, spray urine to lay claim to their territory and warn other males to stay away. In some cases, indoor cats also spray. Most of the time, this happens when something is stressing the cat, such as a new cat in the house. Spraying is the first cat communicating ownership of their territory to the intruder.

Cats use certain behaviors to communicate their feelings to each other. For example, cats display affection, and sometimes dominance, by grooming and licking one another. Touching noses and rubbing their heads and bodies together is another way cats show acceptance and affection towards each other. Loving and friendly cats may even link their tails together, much as humans hold hands.

Besides grooming, cats may communicate dominance towards another cat by sitting on them, chasing them out of rooms or off furniture, or pushing them away from their food and water.

Some behaviors cats use to indicate fear or aggression include stalking other cats, swatting or attacking them, or angry vocalizations.

Cats rely less on vocal ways to communicate than they do the other methods we already discussed. However, that doesnʻt mean they donʻt use verbal means to express themselves.

Hissing, growling, spitting, and yowling are all used by cats to communicate aggression, anger, or fear.

Kittens meow to communicate hunger or discomfort to their mothers but once cats grow up, they donʻt use this method to talk to each other as much. In fact, adult cats use meowing more to communicate with humans than they do each other.

Apparently, cats feel that humans must be spoken to in “baby talk” if we are going to understand them!

Why You Should Care What Your Cats Say To Each Other

Ok, now you know more about how cats communicate but why is it important?

Now that you know more about what youʻre looking at, take some time to watch your cats interact. What behaviors take on new meaning and give you more insight into your catsʻ relationship?

Maybe you thought all that grooming was a sign your cats were getting along great, not that one was bullying the other. Or maybe you just brought home a new cat and now recognize the signs of fear your old cat is displaying.

Understanding how your cats communicate helps you to recognize when your cats might be having problems before they escalate. Behavior problems are a major reason that family cats end up surrendered to animal shelters and the sooner any potential problems are recognized, the better the chance of fixing them.

If you are concerned about your catsʻ behavior towards other cats or even humans, reach out to your veterinarian. They will be able to help you evaluate your cat, diagnose any possible medical conditions that could be contributing, and even refer you to an animal behavior specialist if needed.

Communication is complicated whether itʻs between cats or humans. Even with our gift of speech, humans can have a hard time understanding each other sometimes. Understanding what our cats are saying, especially to each other can be even harder. However, it can be a key factor in making sure our cats are living happy, stress-free lives. Taking the time to learn how cats talk to each other can improve your bond with your pets and even help you find new ways to communicate with them yourself!