How Long Does a Bearded Dragon Live? (Lifespan Guide) 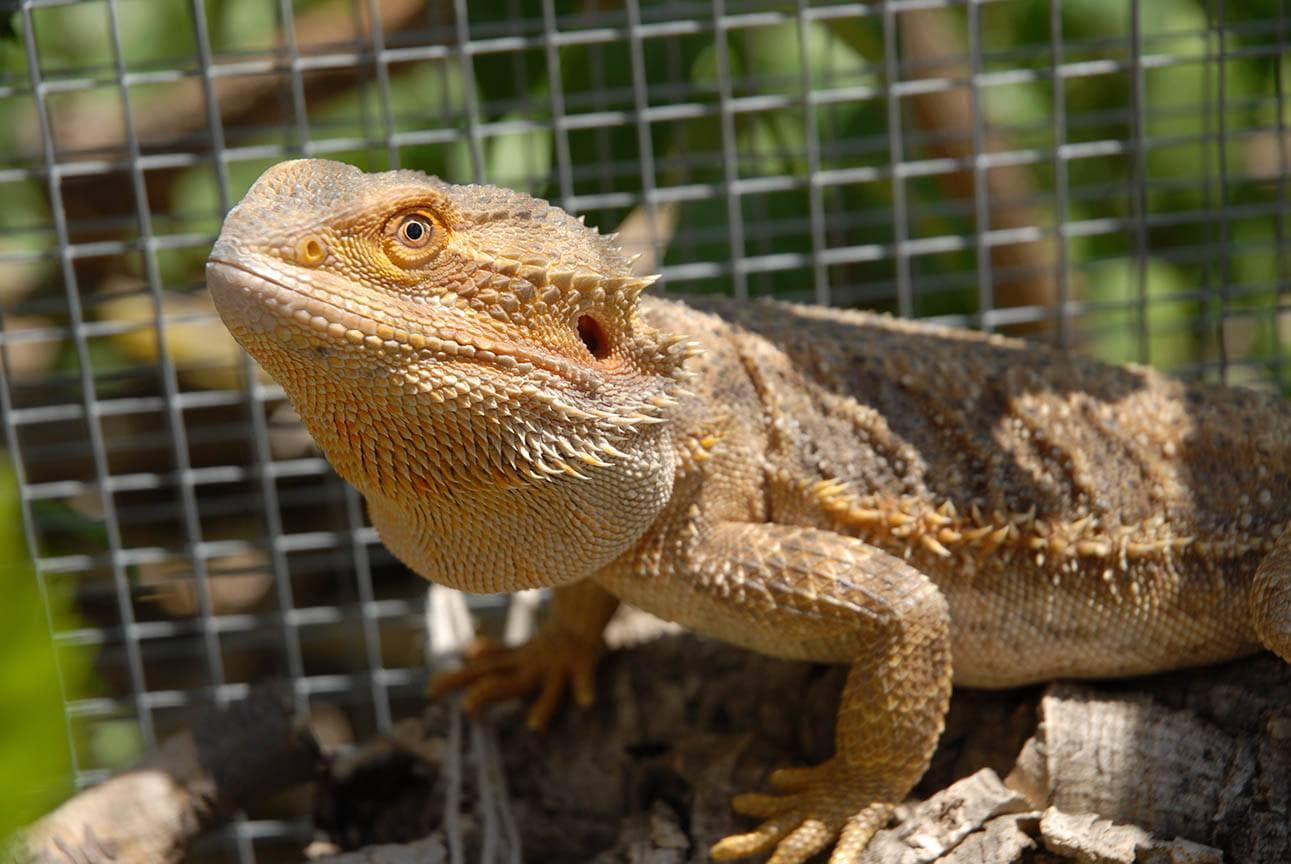 Getting a bearded dragon can be extremely exciting, especially if it’s your first one. Any new pet is special, but bearded dragons are unique. These lizards are truly a sight to behold, and they can be a serious joy to keep as pets.

As with any pet, you’ll come to love your bearded dragon and won’t want to say goodbye. So, how long should you expect to get with your bearded dragon? Do they live just a few years, or will you have possible decades with them like some turtles or birds? It’s safe to say that a bearded dragon will live far longer than the anole lizard you tried to bring home from the carnival, but how long can you expect your new pet to stick around?

What’s the Average Lifespan of a Bearded Dragon?

In the wild, bearded dragons face some tough conditions. They have to locate and hunt their own food, fight for survival, and avoid the many perils of life in the wild. As such, they have pretty short life expectancies. For the average bearded dragon in the wild, life lasts just 3-8 years. Dragons that reach the age of 8 are impressive, as most will die closer to 5 or 6.

Of course, things are quite different for dragons in captivity. The life of a domestic dragon is pretty laid-back. Food is delivered to your house daily and nothing ever tries to eat you, though the cat always looks at you through the glass like it wants to. As such, a domestic dragon in captivity can expect a much longer lifespan. On average, bearded dragons living in captivity have lifespans of 8-15 years.

Why Do Some Bearded Dragons Live Longer Than Others?

Dragons who live until 15 are nearly twice as old as those dying at 8, so what’s causing such a huge difference in lifespan between captive dragons? It’s not just one thing, but several that all work together to either improve your dragon’s overall health or degrade it. Healthier dragons live longer, so knowing about these factors can help you potentially extend your dragon’s lifespan.

Just as for humans, diet and nutrition play a massive role in a bearded dragon’s overall health. For dragons that aren’t eating well-balanced diets filled with all the essential nutrients they need, life will be shorter and wrought with deficiencies and health concerns. Dragons that are fed a diverse diet that meets all of their nutritional needs will live much longer and maintain proper health.

The nutrient ratios your dragon needs will change as they age. Juvenile dragons start out eating about 75% insects and just 25% plant matter. By the time the dragon reaches adulthood, this flips and the diet should consist of 75% plant matter and just 25% insects.

A good bit of forethought and planning goes into caring for a bearded dragon. Bearded dragons come from Australia, so you have to match their enclosure to their original environment. This means keeping it at specific temperatures and providing a certain amount of light and humidity. Meeting these needs means a healthy dragon, while falling short can reduce your dragon’s lifespan.

You’ll need to provide two different areas of the tank; one that’s cooler and one that’s hotter. The hot area needs to be between 96-110 degrees F, depending on your dragon’s age. On the cooler side of the tank, the temperature should be 75-85 degrees F. Additionally, UVA and UVB need to be provided through the light bulbs you use. Humidity levels need to remain below 40%, which means being careful with your water placement and sticking a hygrometer on the wall inside your dragon’s tank.

Also, consider your dragon’s substrate. There are many options, including newspaper, sand, bark, coconut husk, and more. But substrates that have dust and small particles could cause impaction, infections, and other health concerns. Any dragon with repeated health problems is likely to have a shortened lifespan.

Creatures need to live comfortably if you want them to live a long time. Your bearded dragon will need large enough accommodations in order to remain healthy enough to achieve as full of a lifespan as is possible.

While baby bearded dragons can get away with a 20-gallon enclosure, adults need something much larger. You’ll need a tank that’s 100-125 gallons for a full-size adult, which means it has to be more than 20 inches long. That takes up a lot of space in your home, so keeping a dragon healthy can require sacrifice.

When it comes to bearded dragons, bigger is better, at least in regard to their lifespan. Bearded dragons that are bigger tend to live longer. These larger dragons are more resilient and able to adapt to environmental changes more easily. Most of the time, larger dragons tend to outlive the smaller ones.

For bearded dragon females, life tends to be shorter than for males. This is partially because of size differences. Males tend to be larger than females, and as we’ve learned, larger dragons usually live longer. But there’s another reason—breeding. Females go through a lot when breeding and producing offspring, and it takes a toll on their bodies. So, the average expected lifespan of females is shorter than that of males.

Genes matter, regardless of your species. If you want to be a basketball player in the NBA, you’ll have to hope for genetics that allow you to be well over 6 feet in height. Otherwise, your chances aren’t great. But genetics play a role in your dragon’s lifespan as well. Healthy, hardy genes make dragons that live for longer.

There’s one major way you can ensure your dragon has healthy and robust genes—get it from a reputable breeder. Big pet stores sell bearded dragons, but these dragons come with no assurances and you know nothing about their origins. Often, these dragons have been bred and raised in second-rate farms that favor profit over healthy specimens.

But breeders have a reputation on the line. Plus, they usually work on a smaller scale with a lot of effort going into the fortifying of genes through selective breeding. Breeders only want to produce top-quality healthy dragons, so they’re well invested in strengthening their dragons’ gene pool. Purchasing from such a breeder ensures you receive those benefits in your dragon.

Like we said, breeding and producing offspring are very hard on a female dragon’s body. Doing that a few times will take a lot out of them, literally. After reproducing a few times, a female’s lifespan will be greatly reduced. Females that don’t reproduce live much longer on average than females that reproduce, and the more times she reproduces, the more that’s being taken out of her.

Bearded dragons don’t require any vaccines, but that doesn’t mean they shouldn’t receive any veterinary attention. Just like any pet, bearded dragons can benefit from checkups and physical examinations. Its feces can be checked for parasites and your vet can ensure there are no underlying health concerns that you might have missed the signs for.

The Six Life Stages of a Bearded Dragon

This is the first stage of life development. The embryonic stage takes place inside the egg. Stress levels and nutrition of the mother during this stage will affect the offspring and its quality of living.

Most dragon hatchlings start out around 3 inches and will remain hatchlings until they’re about 7-8 inches in a little more than 2 months. During the hatchling stage, dragons grow between 1-3 inches in length each month.

Juvenile dragons are 7-8 inches long. These sub-adult dragons are growing about 1 inch each month and will be considered juveniles until at least 1 year of age. Juveniles eat a diet that’s about 75% insect and 25% plant matter such as fruits and vegetables.

After a year or more, a dragon is considered to be a young adult. They’re not growing as quickly anymore, though they’re nearing sexual maturity. Because of this, social behaviors are becoming more obvious. These dragons should be eating about 50% plant material and 50% insects.

Between the ages of 4-7, a dragon is a mature adult. They’re fully grown by this point and should be eating the opposite diet of a juvenile. As mature adults, dragons are eating about 75% plant matter and only 25% insects.

Old age begins around 7 years for a bearded dragon. Your dragon will start to move less and feedings will reduce as well. Depending on how well your dragon was cared for when it was younger, these effects may take longer to set in. If your dragon was well cared for, it could remain a senior until 15 years of age or older. On the other hand, dragons that received second-rate care might only reach 8 or 10 years before expiring.

How To Tell Your Bearded Dragon’s Age

If you’re unsure of your dragon’s age, you can get a good idea by using its body length. Newborn hatchlings less than a month old are 4 inches long or shorter most of the time. Dragons between 4 inches and 10 inches in length are generally between the ages of 1-4 months. If your dragon is less than 12 inches, it’s probably under a year old.

After your beardie reaches 1 year old, measuring body length becomes a less accurate predictor of age. Most adults are 16-24 inches long, though some juveniles can be 16 inches long as well, making it difficult to tell between them based on length. Still, you can judge them somewhat accurately based on weight. Juvenile dragons almost always weigh less than 300 grams while adults can weigh more than 500 grams when they reach full size.

The final way is to check your dragon’s sex. Once you can do this, your dragon is sexually mature, which first happens between 8-12 months of age.

The overarching idea here is that your dragon will live as long as the care you provide for it allows, barring unforeseen and unfortunate circumstances. Dragons that receive excellent care can live long, outstanding lives. Here’s a great example: a bearded dragon named Sebastian is the longest living dragon on record with a total lifespan of 18 years and 237 days. If that doesn’t give you hope for your dragon to live a long, happy life, then nothing will!

With the proper care, your dragon could potentially live just as long as Sebastian. So, make sure you know exactly what your dragon needs and don’t skimp on the healthcare if you want your dragon to be around for nearly two decades.