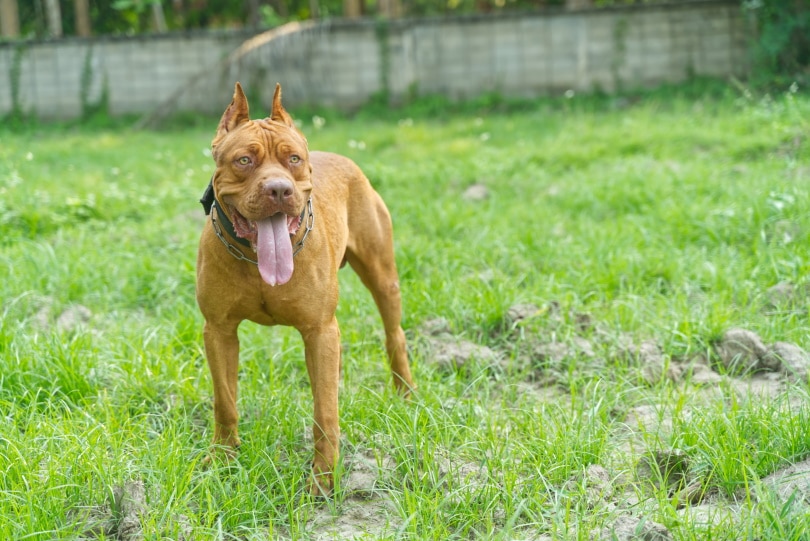 When deciding to add a new furry family member, we often think deeply about how long they’ll be a part of our family. Both because we want to ensure we can adequately care for them for their entire lives and don’t have unrealistic expectations of when they will inevitably leave us. Here is the down-low on how long you can expect your Pitbull to stay with you.

What’s the Average Lifespan of Pitbulls?

The most significant indicator of lifespan for a dog is its size. Larger dogs live shorter lives on average because they age faster than smaller dogs. Pitbulls are medium-sized dogs and will live a life relative to that size classification. On average, Pitbulls live 10–14 years.

Why Do Some Pitbulls Live Longer Than Others?

Many factors influence how long a Pitbull will live. Nutrition, genetics, and breeding history can all be factors in the lifespan of your Pitbull. Depending on where you get your dog, you’ll have access to more or less of their information. So, there may be variance that you are unaware of.

Genetics is the most significant factor for Pitbull lifespans. The best way to determine how long your Pitbull will live is to look at their parents and grandparents. Breeders will be able to furnish you with information about your Pitbull’s lineage. However, shelter dogs do not usually come with this information.

If you don’t have any information about your Pitbull’s life expectancy, the best you can do is influence your dog’s environmental factors to help them reach their maximum life expectancy.

Breeding history is also significant for a Pitbull’s life expectancy. Since the formation of the American Bully Kennel Club in 2004, there has been oversight into breeding Pitbulls, and the dogs have been furnished with pedigrees.

Pedigreed breeding narrows the gene pool significantly since breeders will be inclined to try and keep breed standard traits in the gene pool, sometimes to the detriment of the dogs. This narrow gene pool is especially true of merle patterned Pitbulls.

Merle patterning is not considered a standard Pitbull coat pattern, and to produce merle patterned dogs, breeders may resort to inbreeding their dogs. Be wary of purchasing a merle patterned Pitbull. Even if the breeders do genetic testing for major illnesses, the breeding practices that produce rare patterned dogs can still bring hereditary diseases.

Some Pitbull breeds come in multiple sizes; Bully breeds like the Razor’s Edge Pitbull can range from Standard to XXL. In general, larger-sized dogs will live shorter lifespans than their smaller-sized counterparts.

Nutrition is one of the significant factors Pitbull owners can influence to help provide their Pitbull with the longest possible lifespan. A proper diet can have an immense influence on the length of a Pitbull’s life.

Keeping your Pitbull from becoming overweight will be one of the deciding factors of their lifespan. Overweight Pitbulls suffer from many health issues not faced by their healthy-weight companions, especially as they age, and their joints begin to fail.

If you are wondering if your Pitbull is overweight, feel their sides where the ribcage is. Their ribs shouldn’t stick out or be prominent, but you should be able to feel the bones beneath the skin without pressing down.

Frequent wellness checks can also help improve your Pitbull’s lifespan. Pitbulls can be prone to health issues, especially those relating to the heart. Often these issues do not produce symptoms until the condition has progressed, and they can be the death knell for a Pitbull. Pitbulls can also be prone to skin cancers that could claim your dog’s life if not caught before they can progress.

If you catch these kinds of issues early, the dog’s health outcomes improve drastically. So, it’s essential to make sure that the dog is brought in for regular wellness checks.

Pitbulls also need plenty of exercise to help them stay healthy. As your dog ages, they will naturally slow down, but you can help them stay active to keep their weight from getting out of control.

It’s also essential not to overexercise your dog when they’re still growing. Pitbulls are prone to both Hip and Elbow Dysplasia. These malformations can be exacerbated if the malformed joint is overused while the dog is still growing.

In severe cases, Hip and Elbow Dysplasia can cause lameness and immobility. So, keeping your dog active without hurting its joints is crucial to owning a Pitbull.

The 4 Life Stages of a Pitbulls

Pitbull puppies are energetic and can easily overexercise themselves just based on their energy thresholds. Pitbull puppies can be separated into three sub-stages: newborn, infant, and toddler.

The newborn Pitbull puppy is blind, deaf, and relies on its mother for absolutely everything. During this stage, the puppy won’t be leaving their mother’s side and will nurse and grow alongside their littermates.

During the infant stage, your Pitbull will open their eyes and begin to move about and get its bearings. They won’t be moving very far and still rely on their mother for most things. Towards the end of the infant stage, your Pitbull will begin to walk around and explore. This is a critical time for early socialization that breeders will take advantage of.

Lastly is the toddler stage or the trouble stage. During this time, your puppy will be getting a handle on its new, independent life. They’ll be like a little whirlwind of chaos and cute as they go around making trouble out of curiosity. During this time, it’ll be in your best interest to help protect your Pitbull from themselves by keeping anything dangerous they could get a hold of squarely out of their reach.

Dogs are generally considered adults once they reach 18 months of age, but the mental and emotional maturity can come earlier or later depending on the breed and individual dog. You’ll want to continue with training and socialization during this time to ensure the smoothest possible transition to adulthood.

Just like human adolescents, your dog will test and push its boundaries as they forge its path to adulthood. So, you’ll need to be consistent with training. Some of the things that may be adorable during this stage could be disastrous or dangerous when they get older. Don’t let them get away with any behavior you wouldn’t want your adult dog to exhibit.

Most Pitbulls will reach emotional maturity around the two to the three-year mark. At this time, their youthful excitement will have calmed down a little. They’ll still need regular exercise and will love to romp and play, but a day off here, and there won’t leave them chomping at the bit the way it did when they were young.

Though their energy has lessened, they’ll still need plenty of mental stimulation to keep them busy. An advanced obedience course or dog sport will help keep their mind full and off chewing up your shoes.

Senior Pitbulls are usually eight to nine years old. You’ll probably notice a decrease in activity as their body ages. They may sleep and laze around more often than they did when they were young. You don’t want to let your dog become inactive, but make sure you appropriately scale activity to their advancing age. Shorten walks and take it easy during playtime; your dog isn’t young anymore.

How To Tell Your Pitbulls’s Age

According to the Humane Society of the United States, the most reliable way to determine a dog’s age is to examine its teeth. Puppies up to four weeks of age won’t have teeth at all. Between four and eight weeks, you’ll see needle-like temporary teeth in the mouth.

A puppy will start to grow in their permanent teeth around three to four months of age, and those teeth will stay shiny and white until they’re a year old. By three years of age, most dogs’ teeth have visible yellowing and staining at the back of the mouth. At five years of age, their teeth may be slightly worn down or less pointed than before. Once they eclipse ten years of age, you’ll start to see some cracked or missing teeth.

Another way you can tell your dog’s age is by examining its coat. Dogs will start to show a bit of grey when they get older, just like people. Their coat may also become thinner and more sparse; they may even lose their fur in places as they age.

The eyes are another good indicator of their age. As dogs age, their eyes may become cloudy and start to produce harmless discharge. Some dogs may lose their vision as they get older as well. Pitbulls can be prone to early blindness.

Lastly, you can look at your dog’s physique. Young dogs will be rounder, softer, and have less muscle tone, while older dogs may begin to lose muscle tone and become thin or even bony.

Getting a new dog is a daunting process, and we want to ensure that the dogs we bring into our lives will be able to live full, happy lives with us. Pitbulls have relatively good life expectancy for their size and will live long lives if we take good care of them. You can expect your Pitbull to be by your side for at least ten years, with most Pitbulls reaching the ripe old age of 12. Still, you should do what you can to lengthen the time you’ll get to spend with your new best friend!