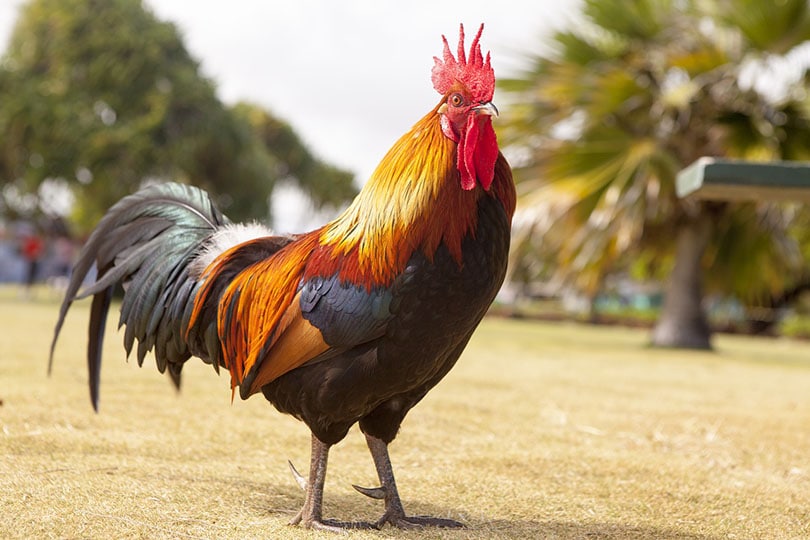 Chickens play vital roles in the world’s food production. Before the dawn of the 20th century, meals made from chicken eggs and meat were enjoyed mainly by small farming communities. As the demand for chickens grew, commercial farming operations increased the animal’s population numbers significantly. Hens seem to get all the attention for their eggs and tender meat, but what about roosters? Roosters are the guardians of the flock, and they aggressively defend their family from predators and nosy humans. They fertilize eggs to hatch chicks and alert the hens when they find tasty treats.

What’s the Average Lifespan of a Rooster?

Roosters have short lifespans, and they usually live 2 to 5 years in the wild. However, roosters raised in captivity can live up to eight years or more. Unlike hens, roosters are less docile and spend most of their lives in a high state of alertness to protect the other birds. On a farm, roosters are less stressed and can rely on human caretakers to provide extra protection from any threats. Some roosters can live over 10 years with the correct diet and care, but unfortunately, the birds are lucky to live a few years when their owners breed them for fighting. Cockfighting is a ghastly sport that pits two aggressive birds in a fight to the death.

Why Do Some Roosters Live Longer Than Others?

Although most of their diet consists of grains, grass, and vegetables, roosters are omnivorous animals that love to feed on insects, small birds, and even reptiles. In the warmer months, farmers rely on hens and roosters to munch on a variety of invasive insects. Commercial chicken feed (also called chicken scratch) supplies the birds with protein and vitamins, but they also need vegetables and grasses to keep their digestive systems healthy. Some of their favorite vegetables and fruits include tomatoes, berries, lettuce, pumpkins, and cauliflower.

Roosters can tolerate cold weather, but they need shelter to escape from harsh weather. Except for Antarctica, chickens live on every continent on the planet. The animals prefer warm weather, but they cannot tolerate scorching conditions. Without shelter to escape the heat, they can suffer from heatstroke. A sturdy chicken coop and plenty of fresh water can keep them safe and hydrated. The enclosure should have solid flooring covered with dry straw to keep the birds comfortable.

Commercial chicken operations are designed to produce an enormous number of eggs and meat. Hens and roosters are confined to tiny spaces, and they rarely get to graze in the fields. Using a commercial operation as a model for your rooster’s home is a bad idea. Overcrowding creates a stressful environment that causes roosters to become more aggressive and violent. The birds need at least 3 to 4 feet of space in the coop to prevent stress and excessive pecking.

Because predators can burrow under a coop with a dirt floor, rooster owners should add wood or vinyl flooring to keep the creatures safe. Metal fencing that is sunk into the ground will keep foxes and coyotes from exploiting a weak spot in the walls. The coop does not need to be insulated like a home, but it needs a solid roof and lockable door to keep the birds hidden from nocturnal predators.

Rosters can weigh 6 to 15 pounds, depending on the chicken’s breed. Roosters are a few inches taller than hens, and their average height can range from 20 to 27 inches. If you raise the massive Brahma, your rooster can grow as tall as 30 inches. In contrast, the tiny Malaysian Serama Bantam grows only 9 inches tall.

Unlike the calmer females, roosters can be aggressive and ready to brawl at any moment. For small farmers with eight to ten chickens, one rooster is all they need to fertilize eggs and protect the flock. If a rooster lives with only a few chickens, he can injure the females during the mating ritual. Roosters love to bite and grab their mates with their claws while they’re performing their act, and if he does not have a larger pool of females, the hens can incur severe injuries and live shorter lives. Roosters are not monogamous, and they prefer to mate with as many females as possible.

Because they’re capable of mating several times a day, a small flock only requires one rooster. Both males and females have wattles and combs, but the rooster’s wattle is brighter colored and more prominent than the hens. When they’re chicks, males and females are difficult to tell apart. When roosters are around 1 year old, their increased height and colorful wattle make them stand apart from the hens.

Roosters have been raised for thousands of years, and their genetic code has been manipulated numerous times to increase fertility rates and resist common diseases. Selective breeding and genetic manipulation have helped chicken companies increase their production, but sometimes the changes have had disastrous results. In 2014, one of the largest chicken producers noticed the fertility rates of eggs were much lower than the average. After scientists studied the birds, they discovered that a genetic defect made the roosters overweight and less willing to fertilize eggs.

Although the ancestors of roosters roamed the earth back in 9000 BC, the birds were primarily used for fighting rather than food. The modern chicken is a descendant of the Southeast Asian red junglefowl, and selective breeding over several thousand years has produced much larger and heavier chickens than their ancestors.

Shelter, fresh water, and a well-balanced diet keep roosters healthy, but they face risks from a number of diseases. Marek’s disease is one of the most common and deadly diseases for chickens. Commercial chicken farmers vaccinate the birds for the virus when they’re only one day old, but unfortunately, some strains of Marek’s are so potent that they overwhelm the vaccine. The disease results from a contagious herpes virus that affects the immune system of chickens and turkeys. The disease is spread from feather dander, and it’s so infectious, it can kill entire flocks. If you raise a rooster, remember to visit an avian veterinarian for testing and vaccinations.

The 4 Life Stages of a Rooster

After a rooster fertilizes the hen’s eggs, the chicken will develop inside the egg for 21 days. Compared to other domesticated birds like ducks, chickens grow quickly. On the 16th day of incubation, the embryo grows down, and on the 20th day, the baby begins using its egg tooth to chip at the shell. Chicks typically break out of the shell entirely in 24 hours.

As newborns, roosters are covered with a fine down that they lose in 7 days from molting. They’re kept in the safety of the chicken coup with their mothers until they’re around 8 weeks old. At that time, they’re fully feathered.

From 4 to 12-weeks old, roosters are juveniles. This period can be difficult for hens and roosters because they must defend themselves from dominant birds that are more mature. Although they may be pushed around or pecked at by adults, most confrontations do not result in serious injuries.

When the juvenile cockerels are 4 to 6 months old, they begin producing sperm and mating. Most farmers will wait until hens are close to a year old before they allow mating. Unlike hens that mellow with age, roosters can stay protective and aggressive for most of their adult lives.

How To Tell Your Rooster’s Age

The best indicator of age on the rooster is the bird’s spurs. The spurs are located on the legs just about the feet. At four months old, the spur will only be a tiny protrusion. As the bird ages, it grows larger. At one year old, the spur is close to an inch long and beginning to curl slightly. In another year, it grows longer and curls. Mature roosters have more prominent, sharper curled spurs than young adults.

Roosters are invaluable to the commercial chicken industry, and they’re trusted bodyguards that defend the flock from danger. Although they’re not as well-behaved as chickens, roosters can make excellent pets with the proper care. They can be aggressive to other animals and humans, but roosters that are handled and loved as chicks are friendlier to humans. Before purchasing a rooster or chick, check your local regulations to ensure poultry is allowed in your area. A loud rooster crow at dawn can wake the neighborhood if you have close neighbors, and they’re better suited for a rural environment.