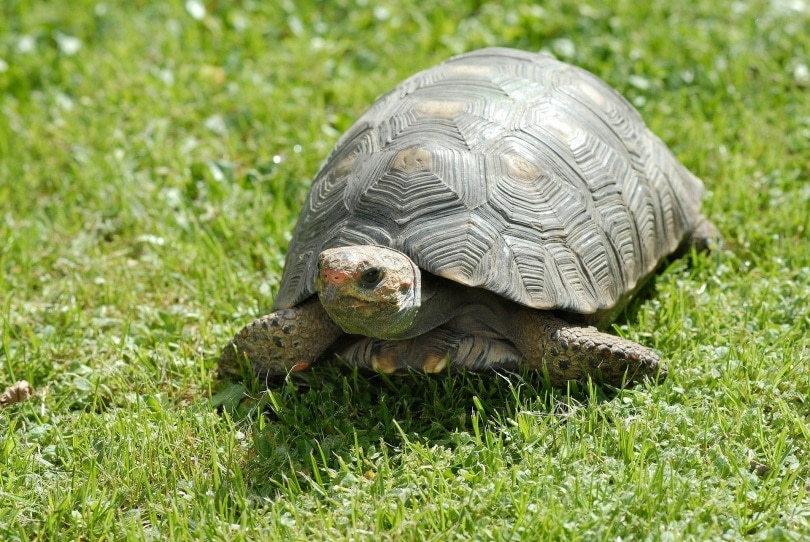 Tortoises are considered some of the longest living creatures on the face of the planet. In fact, some species of tortoises can even live to be 255 years old. Even some of the shortest-lived tortoises still lived to be several decades old, with the shortest lifespan being 80 years.

To learn more about how long tortoises live and facts that impact their lifespan, keep reading. Whether you have a pet tortoise yourself or are simply interested in the gentle giants at your local zoo, this article can give you some insight about how long these creatures live and why.

What’s the Average Lifespan of a Tortoise?

Most pet tortoises live to be around the 100-year mark. Needless to say, tortoises live a long time and are a lifetime commitment. That is part of the reason why many pet shops do not sell tortoises and instead sell turtles, which tend to have shorter lifespans, though not by much.

With that in mind, why do some tortoises live longer than others? As with any other animals, several facts impact the life expectancy of an individual tortoise.

The number one factor that impacts how long a tortoise lives is its activity levels or overall metabolism. Of the different tortoise species, the big tortoises tend to live the longest. It is believed that large tortoises live so long because they have very slow metabolisms. This slow metabolism burns less energy and causes less harm to the tortoise’s cells.

What this means is that a tortoise with a higher natural metabolism rate is going to die before one with a slow rate. Different tortoise species have various metabolism levels, but individuals within the same species will have different metabolisms as well.

There’s nothing humans can do to alter the metabolism of a tortoise. So, it comes down to the species and genetics of the individual tortoise in question.

For starters, tortoises in the wild are more likely to die faster simply because of predators and environmental changes outside of their control. Still, tortoises don’t have too many predators and are relatively hardy.

Within captivity, most tortoises are safe from predators, but they might not be provided the healthiest conditions. Although zoos tend to be diligent in providing the best conditions for their tortoises, individual owners might not provide their pets as clean or healthy of a condition as they need.

Poorly setup conditions can cause the tortoise to develop different illnesses, ultimately resulting in premature death.

One of the most important aspects of the tortoise’s living condition is its enclosure size. Even though tortoises are not as active as dogs and other pets, they still need a whole lot of room to walk around. Without enough room, the tortoise can easily become claustrophobic, and bacteria can build up.

Tortoises need a lot of vegetables to be healthy. In fact, as much as 80% of their diet should come from dark, leafy greens, like romaine, kale, mustard greens, and collards. Tortoises also need a suitable amount of protein, which changes based on the type of tortoise it is.

In the wild, elemental factors may prevent the tortoise from getting the type of nutrition it needs. In comparison, captive tortoises that aren’t fed the diet they need is simply due to ignorance on the owner’s part.

Obviously, tortoises that aren’t fed enough can starve to death. Meanwhile, tortoises that are not fed the proper percentage of nutrients and food can end up developing a number of diseases and illnesses which lead to their death.

Tortoises are not like normal pets. They require veterinary care that is specialized in tortoises and other similar animals. When in the hands of an inexperienced vet, a tortoise’s treatable condition can become deadly fast. Needless to say, access to specialized health care is essential for a healthy tortoise.

The 4 Life Stages of a Tortoise

Tortoises have four stages of life: nesting, hatchling, juvenile, and adulthood. Let’s take a closer look at each one of these stages.

Much like sea turtles, tortoises are born in small clutches, which is the technical term for a nest of tortoise eggs. Most clutches can range from having only 1 egg to 20 eggs, depending on the species. Often, these eggs are incubated for 100 to 160 days. The eggs will be covered in soil and other organic matter.

After the incubation time is up, baby tortoises will use an egg tooth to break out of the shells. The baby tortoises are now hatchlings that eat their embryonic egg sac as their first source of nutrition. Hatchlings will often eat a variety of different foods to ensure they get the nutrients they need during this sensitive time in life.

After the hatchling phase, tortoises will be juveniles until they are about 10 or 20 years old. During the juvenile phase, the tortoise will begin growing and eventually grow to be its full size, but it will not reach sexual maturity yet.

Once the juvenile reaches sexual maturity, it is now considered an adult tortoise. Depending on the species, most tortoises reach sexual maturity when they are between 10 and 20 years old. At this point, the process will start over again for the tortoise’s offspring.

How To Tell Your Tortoise’s Age

It can be difficult to tell how old a tortoise is. One of the only ways that you can determine a tortoise’s age is by looking at how many concentric rings are on its carapace. Theoretically, one ring should be added for every year of life, much like the rings on a tree.

Unfortunately, this technique doesn’t work in all scenarios. If the tortoise has too little or too much access to food, the rings don’t grow in one per year. For example, tortoises without proper access to food might not grow in a full ring, whereas tortoises with too much food may grow in more than one ring in a year.

Although this ring technique is not reliable for giving you an exact age for your tortoise, it can at least give you a general idea of how old it is.

Once again, tortoises have insanely long lifespans, some of which live long enough to see several generations come and go. Even the shortest-lived of tortoises can easily live to see two or three family generations all in one lifetime.

It’s ultimately up to the tortoise’s metabolism to determine how long it lives. The slower the metabolism, the longer the tortoise is expected to be healthy and happy. Some other factors within human control can impact the tortoise’s lifespan too.