How Many Dog Breeds Are There in the World? 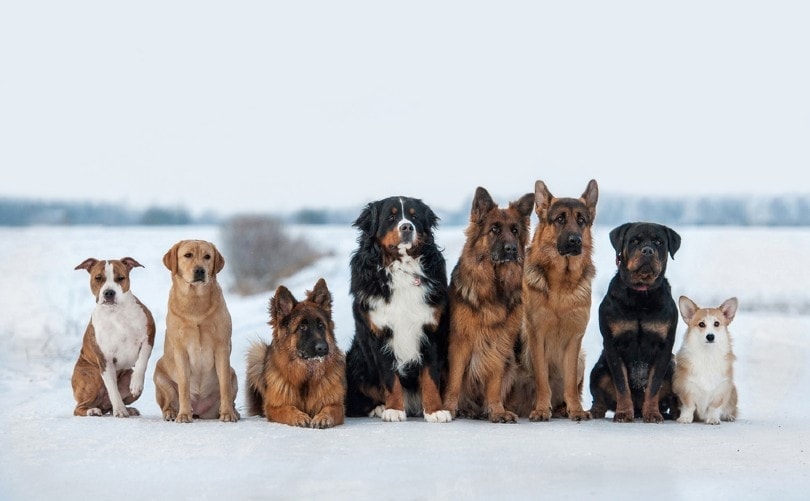 Canines are one of the most successful and diverse species on the planet. They’re found in most countries and regions around the world, and many of these regions have special breeds that originated there with particular characteristics native to the area. Even if you know dozens of dog breeds, there are probably hundreds that you don’t know.

The real question is, just how many dog breeds are there in the world? Is it even possible to count? These are reasonable questions, and to get answers, we’ll have to turn to the groups that make dog breeds their business; the canine registries of the world. Let’s take a look at these registries and the number of breeds recognized by each to see if we can get a better picture regarding how many different canine breeds exist in the world.

The Governing Bodies of Canine Registries

Certain groups govern the registration of canine breeds. Generally, these groups are confined to individual countries. For instance, the AKC is the American Kennel Club, and they’re a US-based governing body. Of course, they’re far from the only such governing body. Some other similar groups include Britain’s Kennel Club (KC), the Federation Cynologique International (FCI), and Europe’s Continental Kennel Club (CKC).

What’s interesting about these groups is that they each utilize entirely different protocols for breed determination. Because of this, they each recognize a different number of dog breeds. This makes it a bit difficult to determine how many breeds there truly are in the world since each of the regulating bodies that keep track of canine breeds disagrees about the number.

What it Takes to Establish a New Breed

Today, there are hundreds of established dog breeds, but that wasn’t the case just 200 years ago. Back then, there was a very limited number of different breeds. During the Victorian era, creating your own breed became popular, and that’s when the number of breeds started to grow.

You could easily start crossing various dog breeds to create a new breed of your own. That doesn’t mean it would ever be recognized by any of the world’s canine governing bodies. Getting a breed recognized by these groups is a long and difficult process.

Before a breed will even be considered by most federations, the breed must meet certain popularity and population requirements. If the breed isn’t popular enough or there aren’t enough specimens,  no clubs will recognize it.

But population and popularity alone won’t get a breed officially recognized. They must also have some history. For the AKC, this means the breed must have existed for at least three generations. Furthermore, national kennel clubs specific to that breed must exist and include at least 100 members throughout no less than 20 states. Yep, some of these qualifications get very specific.

Meeting all of these qualifications isn’t enough to earn breed recognition though. It also takes approval by whichever federation you’re seeking recognition through. For the AKC, once approved, the breed will join the “miscellaneous” class, which is meant for breeds that aren’t officially recognized, but are well on their way.

To become fully recognized, the breed must compete in dog shows under the “miscellaneous” class for at least three years before the board of directors will review the breed for eligibility in the registry. This is an arduous and time-consuming process. Since 2010, only 25 new breeds have been officially recognized by the AKC.

Once a breed is recognized by the AKC, they’re given a classification that groups them with other similar breeds. In total, there are seven classifications for officially recognized breeds. In addition to these seven groups, two gateway groups also allow breeds to work their way into full recognition—the Foundation Stock Service and the Miscellaneous Class—but they’re not for official breeds.

The working group includes many of earth’s most ancient canine breeds. These are hard-working utilitarian breeds that have been used to aid humans in their work. Common traits of these breeds include physical strength, intelligence, and large stature. Some of the popular working breeds include Boxers, Great Danes, and Rottweilers.

Breeds classified as sporting breeds are the dogs that are used to aid hunters in retrieving game birds. These dogs are often great swimmers, able to retrieve waterfowl from the water. Other sporting dogs have thick coats to protect them from brush and brambles when making their way through thick forestation. Labrador Retrievers, Cocker Spaniels, and German Shorthaired Pointers are all great examples of sporting breeds.

When a breed doesn’t possess qualities that make it fit for inclusion in one of these other groups, it gets classified as a non-sporting breed. These breeds all have one thing in common: they’re dogs. Because of this, the non-sporting group is one of the most diverse canine classifications, containing breeds such as the Poodle, Dalmatian, and the Bulldog.

The Herding group is rather self-explanatory. Breeds in this group were built and bred for herding livestock such as cattle, sheep, reindeer, and horses. Dogs in this group must have high levels of intelligence and be highly trainable. Members of this group are still used for herding, though they’ve also branched out and work in other fields such as police and military. Well-known herding breeds include the German Shepherd, Border Collie, and Pembroke Welsh Corgi.

Terrier breeds were created to go after rodents and other small vermin. The short-legged terriers were made to go underground after varmints while the longer-legged terrier breeds dig out their prey. Large “bully” breeds are also included in this classification. They were originally bred for much more dangerous pursuits, including bull-baiting. Bull Terriers, Scottish Terriers, and West Highland White Terriers are some breeds in this group that you might be familiar with.

Hounds are the hunting group. Sighthounds and scenthounds are both included in this group, though they hunted through different means. Sighthounds had to chase down cunning and agile quarry, such as antelope and jackrabbits. Meanwhile, scenthounds had to track down their prey, which sometimes even included convicts who had escaped from prison! Hounds you might recognize include Bloodhounds, Dachshunds, and Greyhounds.

Toy dogs are bred strictly for companionship. These are much smaller breeds that are often great options for those in cities; particularly people in smaller living accommodations such as apartments. Lots of toy breeds are highly popular pets, including Shih Tzus, Pugs, and Chihuahuas.

How Many Dog Breeds Are There?

The answer to this question will vary depending on who you ask because each canine registration governing body recognizes different breeds. For instance, the AKC only recognizes 195 breeds. On the other hand, the FCI recognizes 360 breeds officially, not including the many experimental breeds that are on their way to achieving true recognition

So, unfortunately, there’s no way to truly know how many dog breeds exist in the world. We can be certain that 360 is the minimum number, as this is the largest amount officially recognized by any governing body and it doesn’t even include mixed breeds and designer dogs. If those were included, it could bring the total number of breeds up as high as 500 or more, but there’s no way for us to know for sure.

We can make guesses as to the number of dog breeds that exist in the world, but we can’t know for certain. Different organizations that govern the recognition of dog breeds disagree about the number of official breeds. The FCI recognizes 360 breeds, so we can assume that there are at least this many dog breeds in existence. Since that number doesn’t include mixed breeds, even the popular and well-known designer breeds, we can only guess how many breeds truly exist across the globe.