How Many Eggs Do Frogs Lay? How Many Survive? 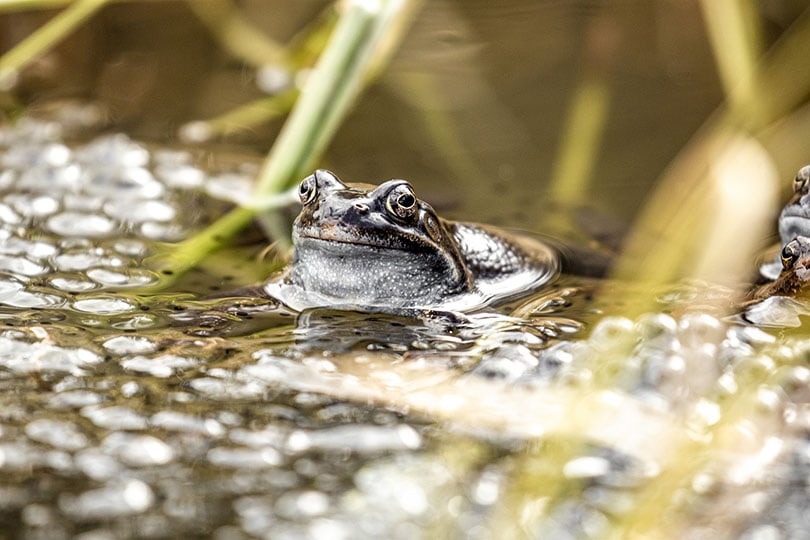 Have you ever wanted to keep a frog as a pet? Well, it’s quite possible, and many people do. Frogs are much more than people assume. They can make fascinating pets so, it’s better to learn a little about them, including how many eggs they lay.

Generally speaking, frogs lay a lot of eggs. But, for finer details, you have to get down to specific species. There are over 5000 species of frogs, each laying a different amount of eggs. These frogs can lay anywhere from 2,000 to 20,000 eggs each cycle.

Such high numbers are crucial for species survival. So, stick around and let’s explore why frogs lay so many eggs and much more.

How Many Eggs Do Frogs Lay Each Time?

As mentioned above, frogs do lay thousands of eggs. The specific number of eggs each frog lays in a cycle depends on the species. For instance, the common frog can lay between 3,000 to 6,000 eggs each time.

Such high numbers are necessary because the truth is only a few will survive. Estimates show that 1 in every 50 eggs will hatch into a tadpole. The rest either get eaten by fish, washed away or simply don’t hatch.

Once a frog is 4 years old, it’s sexually mature to reproduce. Hibernation ends in February, and the frogs begin to gather in breeding grounds around March. It’s here that females lay the eggs, and males come to fertilize them.

How Many Frog Eggs Survive?

Imagine laying thousands of eggs and having only a handful survive. Well, that’s the reality that frogs have to face in the wild. Even after producing so many eggs, not all will hatch into tadpoles. Perhaps that’s not such a bad thing considering the ecosystem requires a delicate balance.

A good example of this is the White Tree frog, which hatches 100 tadpoles out of every 1000 eggs. It means if the White’s Tree frog, for instance, lays 2 clutches in a year, only 200 tadpoles will hatch. This is because female frogs don’t tend to their eggs. All they do is lay them and go on their way. The eggs are left to the mercy of the environment.

But, it’s worth noting that there’s an exception to this. The Poison-dart frog is among the few that protect its eggs. While it’s hard for others to guard thousands of eggs, this species only lays 2 to 12 eggs each time. The number is small enough for the male and female to stand guard until they hatch.

Such acts improve the chances of the eggs surviving. It’s why not all species of frogs lay thousands of eggs.

How Do Frogs Lay Eggs?

Frogs rely on amplexus to reproduce, meaning they use external fertilization. It requires the female frog to lay the eggs. Only then can the male frog release its sperm to fertilize them. Any clutch of eggs that don’t get fertilized won’t hatch tadpoles.

Amplexus is when the male frog climbs on the female’s back, signaling the start of the mating season. The eggs contain an embryo that becomes a zygote after fertilization. This will, in turn, develop and become a tadpole when it’s ready to hatch.

Best Spots for Frogs to Lay Eggs in the Wild

Picking out the best place to lay eggs comes naturally to many animals. Frogs are no exception to this rule of nature. They require certain features in an environment to lay their eggs. Such areas must be wet.

Frogs don’t reproduce during the dry or winter seasons. They wait for the rains to lay eggs in a wet area. Lots of moisture is essential to the survival of the eggs. Not to mention tadpoles can only live in water until they grow up.

Frogs love stagnant waters, so you’ll find many of them in ponds, swamps, or calm lakes. The water must be free-standing to sustain the eggs until they hatch. Some even lay eggs in drainages where there’s warm water to keep the eggs alive.

How Long Does It Take for a Frog Egg to Hatch?

Frogs come in all shapes and sizes. You can find so many different species across the world. However, many frog species have one commonality, which is the life cycle. All frogs start as eggs that hatch into tadpoles and grow into adult frogs.

What’s interesting is it takes some frog eggs 3 days to hatch while others take 25 days. The variation is because of the difference in species. Once the eggs hatch, they become tadpoles that resemble fish more than frogs.

Frogs that grow up in the wild can live up to 8 years. However, as pets, well-cared-for frogs live even up to 2 decades.

How Long Does It Take for Tadpoles to Turn Into Frogs?

The life cycle of many frogs starts as eggs. The adult female frogs lay the eggs that hatch into tadpoles. These look like tiny fish and even come with a tail and gills to help them survive in water.

Tadpoles go through a developmental state which sees them grow the back legs followed by the front leg. As the frog grows, its tail continues to shrink. But, these tadpoles can only grow under the right circumstances.

First, they need water to survive. Next is food because ever-growing creature requires proper nutrition. It will take a tadpole 14 weeks to grow into an adult frog.

But, it’s worth noting that not all frogs follow this life cycle. Others skip the egg stage and give birth to live tadpoles. The duration of one stage to the next also varies from one frog species to another. Tadpoles in the wild enjoy eating weeds that grow in ponds, so you can feed them pieces of micro greens like lettuce at home.

Can You Move Frog Eggs?

As a pet owner, you might want to relocate frogs’ eggs after they’re hatched. Well, it’s possible to do so, but always ensure you take extra care. These eggs are delicate, and one slip-up can cost you a whole clutch.

If you want to move frog eggs safely, first you need to prepare their new home. The best setup is a fish tank with water, pondweeds, rocks and some dirt to recreate their natural habitat. Ensure you use water with the right pH for frogs and keep it at 59 to 86 F.

Afterward, you can untie it and pour the frog eggs into the tank. These eggs will need an hour of sunshine each day to develop. In warmer climates, frogs have two reproduction seasons if the weather is nice with lots of moisture around.

Can Frog Eggs Survive Out of Water?

Frogs and their eggs require water to survive. While adults don’t remain submerged in water all the time, eggs and tadpoles must be in the water to survive. Both dry up and die when they’re left without any water, which is a huge loss.

When a frog lays eggs, it leaves them in a jelly-like substance that requires lots of moisture. The moisture is instrumental not only in the survival but also in the development of the eggs. It’s also where the tadpoles will live for some time before growing into adult frogs.

Do Frogs Eat Their Babies?

A reason many frog pet owners separate frogs from their young is because of their cannibalistic nature. Yes, frogs do eat many small creatures, including their babies. The nature factor that sees adult frogs abandon their eggs soon after laying them is a contributing factor.

Frogs have a wide range of foods they enjoy eating. If necessary, they will also include their young in this menu. A good example is the African Clawed frog that eats its tadpoles.

Frogs are fascinating creatures and can make amazing pets. These amphibians start life off as eggs that hatch into tadpoles. The tadpoles then grow into adult frogs. But, this isn’t the case for all species, as some give birth to live tadpoles skipping the egg stage altogether.

The eggs require 3 to 25 days to hatch into tadpoles. Many frogs don’t look after their eggs and tend to lay thousands at a time. Only a small percentage of these eggs will survive into adulthood. Other frogs only lay a handful of eggs which they look after until they hatch.

Eggs and tadpoles require lots of moisture to survive. Otherwise, they dry up and die. After hatching, a tadpole will take up to 14 weeks to grow into an adult frog. It’s worth noting that frogs tend to be cannibalistic, meaning they can and will eat their young.