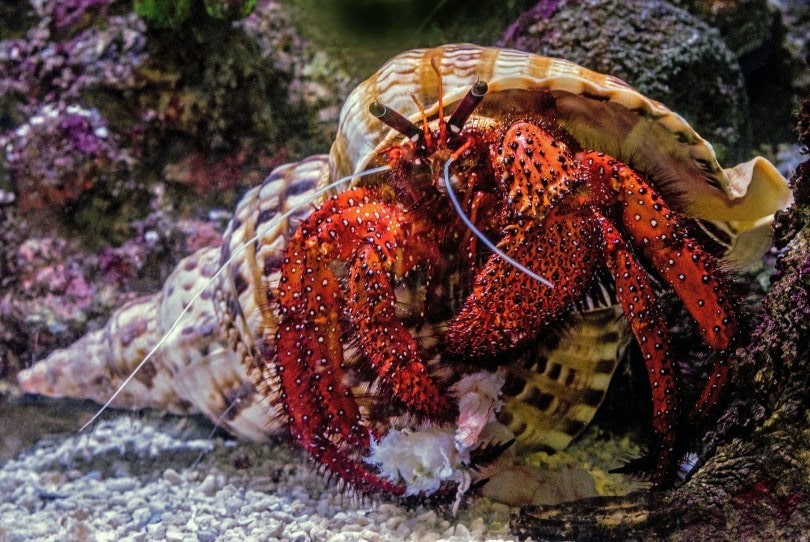 When it comes to picking out a pet, many people overlook the mighty hermit crab. That’s a shame because they have many things going for them: They don’t take up much space, they don’t require much care, and it’s unlikely that they’ll ever eat you or your children.

However, owning a hermit crab can be quite a bit more involved than many people suspect. The fact of the matter is, keeping hermit crabs can be a costly hobby, especially if you’re unsure of what you’re doing. As a result, many people give up on raising these pets and miss out on all the potential fun.

The guide below will give you a good idea of what it will cost to bring home and raise a hermit crab, so you can be prepared for everything that ownership entails. Everything listed on the chart is just a ballpark figure, but they should give you a clue as to what to expect from the process.

Buying a hermit crab certainly isn’t as expensive as purchasing a purebred dog or an exotic pet like a rare fish, but there are more costs involved than many people expect.

However, if you don’t know what you’re doing, you can easily be talked into buying stuff that you don’t need — or you could get home without essential gear, possibly putting your crab at risk.

Finding a hermit crab for free can be extremely difficult. You can’t just go to the pound, there aren’t many rescue groups around, and unless you live in the tropics, snatching one out of the wild is out of the question.

You may be able to find one if you look on local message boards, but it will likely take quite a bit of time and effort. Given how cheap they can be to purchase, there’s little reason to try to find one for free.

There are a few adoption groups out there, but they’re few and far between, so you may not be able to find one in your area.

The good news is that adoption is usually free, as many groups are desperate to find good homes for their crabs.

However, that also means that they’re likely to have requirements about who they allow to adopt their crabs, and you may need to prove that you have a sufficient amount of gear before they’ll let you take a crab home.

In most cases, buying a crab from a breeder or your local pet store is your best bet. It’s relatively cheap and incredibly easy, so there’s little reason to go through the hassle of trying to track down a free pet.

The cost will depend on a few things, including the size and species of crab. Some crabs come with their own enclosures, but you’ll likely have to pay extra for those.

While hermit crabs aren’t that expensive, they do need a fair bit of gear. You can’t just keep them in the backyard or let them sleep in bed with you.

There’s plenty of stuff you could buy your crab that they don’t necessarily need, but there are also essentials, like a tank, substrate, and food and water dishes.

Below, we created a list of the most common supplies. Not all of these are essential, but they should give your crab the best chance of thriving in their new home.

Hermit crabs are inexpensive pets to keep, as they don’t require expensive food or toys. The biggest factor affecting your costs will be how many crabs you own; obviously, one or two crabs will cost much less than keeping an entire colony.

Their food should be cheap, as you don’t necessarily need to buy it for them. You can just give them fruit, veggies, nuts, or seafood. If you do decide to buy food for them, you can buy commercial food specifically designed for hermit crabs, or you can give them fish flakes.

This may seem a little callous, but most people never take their hermit crabs to the vet. That’s not just because they’re inexpensive to replace, though; the fact of the matter is that if your crab gets sick, there’s little a vet can do for them.

If you notice your crab acting sickly, you may want to check the conditions in their tank or switch up their food. Beyond that, though, there’s little you — or anyone else — can do to make them healthy once they fall ill.

It may come as a surprise to you, but just like other pets, hermit crabs can get parasites. These unwanted bugs include mites, flies, and beetles.

Fortunately, though, dealing with hermit crab parasites is cheap and is actually free in many cases, as all you’ll need is boiling water. Avoid buying chemicals at the store because crabs are often more sensitive to the treatments than the parasites are.

Your hermit crab can often eat many of the same things you eat, so you may not need to go out of pocket to buy special food for them.

That being said, you can find special hermit crab food at most pet stores, as well as fish flakes, brine shrimp, and other things they like to eat. There’s no real consensus as to whether the specialty food is better than giving them meals from your own fridge, so go with whatever’s more convenient for you.

You’ll need to clean your crab’s tank regularly in order to keep them healthy, but you don’t necessarily need to buy multiple cleaners to do so.

Hermit crabs are sensitive to chemicals, so you’ll want to avoid bleach and other harsh disinfectants. Instead, you can use vinegar and boiling water to do most of the cleaning, along with a brush to take care of dirt and debris.

Of course, you’ll also need to buy a separate holding container to house your crab while you clean their tank, but that’s a minimal, one-time expense.

Hermit crabs don’t require much in the way of entertainment; you won’t need to buy squeaky toys, feathers, or laser pointers to keep them engaged.

Instead, they need things they can crawl on, around, and under. You can buy driftwood from pet stores, or you can put plants and vines in the habitat instead. You may want to put seashells in there as well.

Be careful about putting wood or other items that you found yourself in the tank, though. While they may be fine, some objects may have bugs, chemicals, or other unwanted additions on them, and you could be putting your crab’s life in danger as a result.

Crabs don’t really require variety, so there’s no need to buy new stuff or rearrange it in order to keep your hermit happy. However, you may feel better if you do, so we won’t judge you for giving your crab’s crib a makeover.

Hermit crabs are cheap pets to own, but you’ll still need to shell out money to take care of them. Those costs can vary wildly, however, with the main variable being whether you buy special food for them or share your own.

Owning a Hermit Crab on a Budget

Owning a hermit crab on a budget won’t look much different than regular, garden-variety hermit crab ownership. The biggest difference is the type of food you serve them, but even that won’t make a huge dent in your pocketbook.

Most of the biggest expenses related to hermit crab ownership are one-time fees, like buying a tank or the crabs themselves. Once you’re set up, maintaining your pet’s lifestyle is quite inexpensive indeed.

Given that you’re not going to be taking your crab to the vet, there aren’t many opportunities to save money on their care. What opportunities do exist will present you with the chance to save a few bucks at most.

Beyond serving them food from your own kitchen, the only opportunity to save cash is by using vinegar or boiling water instead of a biodegradable cleaner. Given that a bottle of cleaner only costs a few bucks, you’re not going to get rich off this money-saving hack.

You may be tempted to try to save money in the beginning by skimping on tank size, heaters, lamps, and other accessories. We strongly encourage you not to do this, as those items are all essential for keeping a healthy hermit crab.

If you’re looking for a pet that’s big on fun but short on expense, a hermit crab is the way to go. These little critters are endlessly fascinating, but they won’t cost an arm and a leg the same way that a dog or cat will.

You can get set up with a hermit crab for less than $100 if you know what you’re doing, and owning one should only cost you a C-note or two per year. That makes them wonderful pets for animal lovers on a budget or great starter pets for kids who need to prove that they can take care of an animal before graduating to something more demanding.

You may not get much love and affection from a hermit crab, but with the money you save by owning one, you can always pay people to be your friend.