10 Signs That Your Dog Is Sick 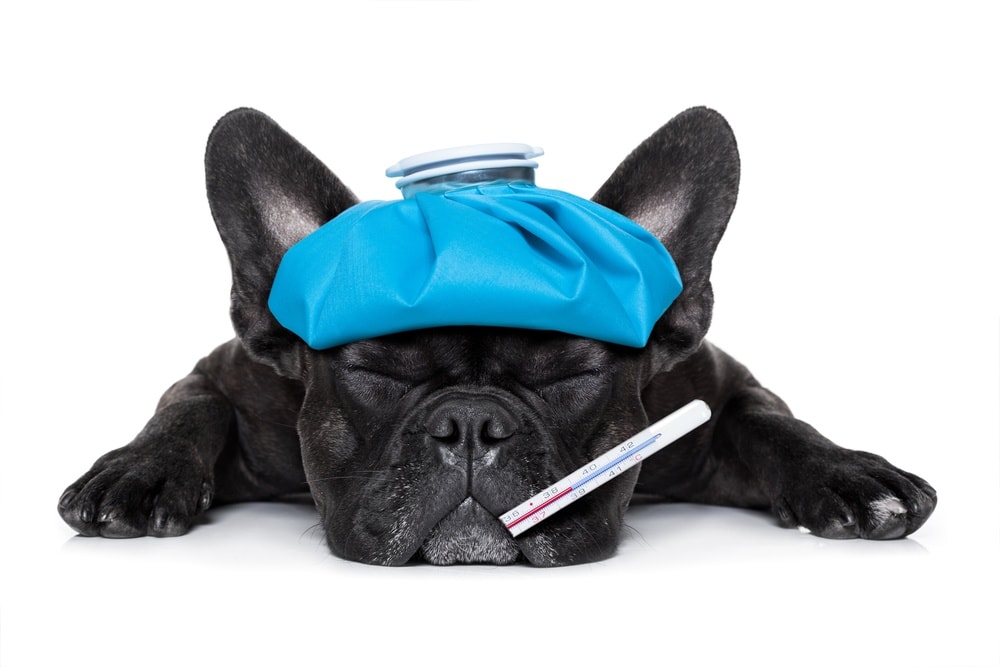 When our dogs are sick, it is often essential to seek out vet care quickly. Many illnesses can be treated inexpensively and easily if they are caught early. However, if the disease is left to progress, treatment may become more complicated. This often means that dog will need more medication, surgeries, and similar treatments, which can make it more difficult for your dog and your wallet.

With that said, it isn’t always so simple as taking your dog to the vet when you notice they are sick. Sometimes, it is nearly impossible to tell when they are sick. While many illnesses have pretty obvious symptoms, others can blend into your dog’s normal behaviors until they become serious.

There are a few common behaviors among sick dogs, though. In this article, we’ll take a look at these usual behaviors so that you can spot changes in your dog when it’s important.

Many dogs will stop eating when they become ill. This may become apparent before any other symptoms show up. While lack of appetite is most common in dental and intestinal problems, it can occur during many different kinds of diseases. For instance, dogs with food allergies may stop eating as much because it makes their stomach feel upset.

If your dog suddenly isn’t eating as much as they once were, you might want to consider taking a trip to the vet. While dogs can lose their appetite for some pretty benign reasons, not eating for a few days is usually a sign that something is wrong.

Many diseases may make your dog thirstier or may cause your dog not to drink at all. Diabetes is a great example of this, as dogs will almost always start to drink more when their blood sugar remains high for too long. Kidney and bladder problems may also cause excessive thirst. Anything that makes the body unable to get rid of toxins as efficiently may lead to increased water intake; it’s the body’s way of trying to correct the situation.

Of course, dogs will often drink more if it is hot or they have become more active. However, if your dog suddenly starts drinking more for no obvious reason, it could easily be because they are sick.

Sick dogs will often try to get away from others. This is instinctual and doesn’t have anything to do with you personally. In the wild, a sick dog was more likely to be attacked. Therefore, when they were sick, it was important for them to stay out of sight until they healed. Many dogs still have these instincts today, so it isn’t uncommon for them to hide when they become sick.

If your dog is suddenly hiding under beds and doesn’t want to come out for their normal activities, something could be wrong.

Sometimes, dogs may hide when they are stressed out as well. If you’ve recently moved or changed your routine, this may be the reason for your dog’s behavior. However, if nothing recently has changed, they could be stressed because of their sickness.

Dogs that are sick may have trouble urinating or defecating. These issues can be caused by a wide variety of problems – some serious and some pretty minor. However, your dog’s bathroom habits will rarely be caused by something else, so if you notice this sign, your dog is probably sick.

Because some serious conditions can cause bathroom problems, you should see your vet right away. This is especially true if your dog tries to urinate but cannot, as this may be caused by a blockage that needs to be treated right away. There isn’t much second-guessing you can do here.

Too much urination can also be a problem. Typically, this goes right along with increased water intake. However, some owners may notice increase urination before they notice the increased thirst. After all, most owners are pretty involved in their dog’s bathroom habits but may not notice slight changes in how much their dog is drinking.

Many dogs will lick themselves to stay clean. However, there is a fine line between normal licking and seemingly obsessive licking. Many people interpret this as a behavioral problem. However, it is more likely to be caused by an underlying condition. Food allergies often cause itchiness, for instance. Any sort of skin irritation, including some parasites, may also cause excess licking.

While excess licking is almost always a cause of an underlying problem, it can also become a problem in itself. Many dogs will lick until they leave sores, which often don’t heal because the pet is licking them. These can get infected. While this is a problem for any dog, it is particularly a problem for sick dogs that may already have a compromised immune system.

When dogs are sick, they may not want to be touched or messed with. Sometimes, they may lean on extreme behaviors to prevent humans from potentially hurting them further. This can result in aggression. If your dog is suddenly aggressive for seemingly no reason, they may be sick.

Think about it: if a dog’s stomach is hurting and you come over to give them tummy rubs, they likely won’t take it too kindly. If they also don’t want to move because of their pain, the only way they can make you stop is aggression.

Some dogs may yelp or whine when they’re hurt. Others become aggressive. Keep an eye on these extreme behavior changes, as they almost always point to an underlying problem. Dogs just don’t’ become aggressive for no reason.

Just like people, when most dogs get sick, they probably won’t want to move around much anymore. If your dog is suddenly laying around and just not acting like they feel good, they probably aren’t. If you can’t notice any obvious sign of your dog’s lethargy, you should visit your vet. Often, sudden and seemingly random lethargy is more worrisome than lethargy that is paired with other symptoms.

There are many severe diseases that will cause energy loss without many or any other symptoms. For instance, heart failure may cause your dog to tire more easily, causing lethargy. But no other symptoms may be present.

Panting is a dog’s normal reaction to pain. Many dogs may show no other symptoms of being in pain beside panting excessively for seemingly no reason. If your dog isn’t being active and isn’t somewhere hot, panting is usually a sign of a problem.

Many dogs also pant when they are stressed out. However, stress can also be caused by illnesses. Unless there is an obvious reason why your dog should be stressed, you should seriously question excess panting.

Because the dog is in pain, they will also likely not want to move very much and may develop changes in behavior. If your dog is panting and doesn’t want to move from their bed, there is likely something wrong. You should give your dog a careful look over to see if you notice any other obvious symptoms. Pain can be caused by very simple things, like a bee sting or serious, life-threatening illnesses.

Any sort of eye change may point towards health issues for your canine. Whether the eyes become cloudy, “zoned out,” or watery, all these changes point to a problem. Often, this problem will involve the eye itself. However, many underlying conditions can affect the eyes.

This change can point to something a simple as a scratch on your dog’s eye, or it can point towards some sort of progressive eye disease. Either way, vet attention may be required. Even if your dog only has a scratch, the vet may want to use an antibiotic cream to prevent it from becoming infected.

If your dog seems to wander around the house, get “stuck” in corners or starts having accidents, it could be a sign that they are confused. This is often a symptom of doggie dementia. However, it can also be caused by a variety of neurological problems. Dogs in shock may often act confused, but they usually exhibit other symptoms as well. Confusion is often confused with blindness, especially if the loss of vision is sudden and the dog doesn’t have time to adjust to it.

Well-behaved dogs that suddenly start having accidents in the house and stop following commands may just be confused. Don’t always assume that your dog simply is behaving poorly. They may just not remember where they’re supposed to use the bathroom.

While confusion isn’t always curable, it can often be helped by a vet. It may also be caused by an underlying problem that is curable.

The first step in solving any health issue is to recognize the signs and symptoms of an underlying problem. Most dog owners will notice when something is wrong with their pup, but it’s important to stay alert. Every now and then, you should take a careful assessment of your dog—simply as a precaution. You might notice something you hadn’t before. And then, it’s probably time for a trip to the vet.