Common Signs of Dehydration in Dogs 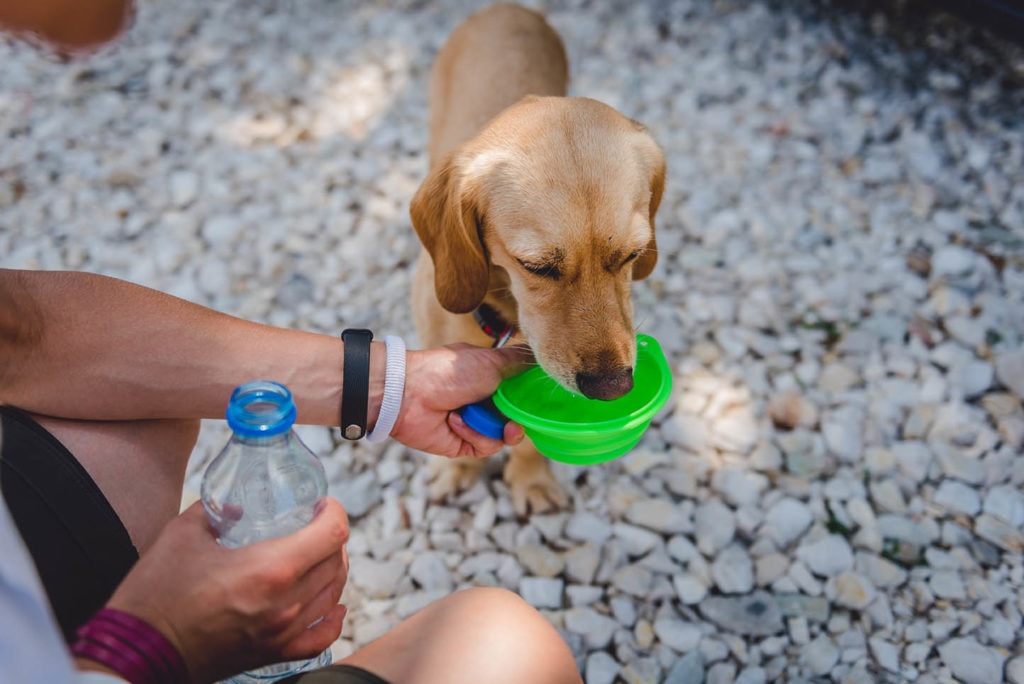 Dehydration is when the body is lacking water. Every day your puppy eliminates water from his body via sweat, urine, exhalation and saliva evaporation when panting. If your puppy does not take in enough water it can lead to dehydration also called Hypohydration. Puppies in particular are more likely to suffer from dehydration because of their smaller size. Owners of puppies need to be especially careful in warm climates or summer months when the puppy can become overheated from exertion and play and lose more water than normal. Three quarters of water loss is through pee and just under a quarter is from the mouth when breathing, and the skin as sweat. When your puppy eats and drinks he replaces that water so providing adequate fresh water is essential. While summer months mean letting them drink more frequently, in the winter you still need to take care and pay attention in case their water freezes.

Dogs more at risk of dehydration include senior dogs, nursing dogs, pregnant dogs, diabetic dogs, and those with illnesses like cancer, kidney disorders and infections.

If your puppy has vomiting or diarrhea this too adds to water loss. Often when a puppy is ill and loses more water there is a risk of dehydration because they may be reluctant to drink more water while they are ill. Fever too can lead to dehydration because he is sweating a lot more during that time. If a puppy has diabetes this can cause frequent urination which can lead to dehydration and anything that makes him unwilling to eat or drink can too.

In a healthy dog about 60 per cent of his body weight is made up of just water. If he loses even just 5% of that he can start to show signs of dehydration. Twelve to fifteen per cent loss can lead to him going into shock and dieing.

Here is a look at the symptoms of dehydration in your puppy;

An early sign is the mucous membranes start to dry out. The gums and tongue too will be sticky rather than wet because saliva production is no longer what it should be so he has a dry mouth.

The nose is no longer cold and wet, it is dry.

The puppy’s skin becomes loose as the elasticity is lost.

The loose skin over your puppy’s shoulders and necks should spring back straight away when you grasp and lift then release. If it does not this is a sign of dehydration. Dehydration of 7% to 8% will lead to the skin still retracting back but slowly. If the dehydration is more serious around 10% the skin will stay in a ridge and will not move back.

You can also check your dog’s gums for capillary refill time. Press the gums gently with a finger which blocks the blood flow to them making them turn white. Release the pressure and a healthy dog will take less than two seconds for the white to return to normal gum color. 7% to 8% dehydration will delay that time to two to three seconds. More than four or five seconds means your puppy is severely dehydrated and in a dangerous situation.

If you are concerned that your puppy may be suffering from dehydration it is a good idea to take him to a vet to be checked over in case there is an underlying cause that needs to be dealt with. Moderate to severe dehydration needs a vet’s intervention as they will need fluid therapy to be re-hydrated and to make sure his electrolyte balance is back to normal. He may also need medication to control any vomiting and diarrhea that may be the cause or that may be preventing him from drinking.

If it is a case of mild dehydration and your puppy is not vomiting so can keep down water you can keep your dog’s bowl of water topped up with fresh water that is at cool or room temperature and add some Pedialyte to the bowl of water for extra help with electrolytes.

Here are some important things you can do to prevent dehydration in your puppy.

Make sure he has access to clean water at all times.

Change his water regularly so that it is fresh and not too warm. By changing it regularly you also are checking in case it has been spilled.

Wash his bowl daily to stop bacteria forming in it which might make him ill.

Pay attention to how much water he is drinking. For every pound he weighs he should be drinking that many ounces of water a day. For example if he weighs 5 pounds he should be drinking 5 ounces of water daily. If he is not drinking enough you need to take him to a vet to find out why and treat it. Monitoring his water is especially vital after bouts of diarrhea and vomiting as this is when he is most at risk of becoming dehydrated.

To stop your dog knocking over his water and spilling it when you are not home leaving him without fresh water get a water bowl that has a weighted bottom.

When your dog has exercised or when he is traveling he requires additional water.

Check his mouth for any ulcers, burrs or sores if he seems reluctant to eat or drink.

Keep the lid of your toilet down so he does not drink out of it as it can be a place of bacteria.

Sometimes when people chain their dogs up outside they can become tangled up in their chain and can no longer reach their water bowls. Try to avoid chaining your dog in the yard.