How to Tell If a Ball Python Is Pregnant (With Pictures) 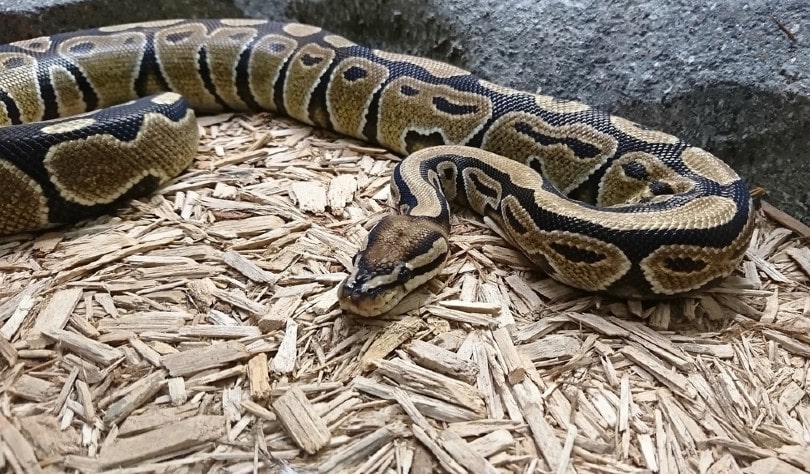 Being “gravid” means your Python is carrying fertile eggs, and it can be difficult to tell, especially at first, whether she is pregnant. Ball Pythons will typically lay eggs about 4–5 weeks after mating, so you’ll find out soon enough!

While a checkup with the vet is the only way of being certain that your Python is pregnant, there are a few other signs to look for. In this article, we go over what some of these signs are. Let’s dive in!

The only way to be absolutely sure that your Ball Python is pregnant is with an X-ray or ultrasound performed by a vet. Gravid females will have clearly visible eggs that will confirm their pregnancy. Of course, this is an expensive and time-consuming process, and watching for other signs first can help save you the time and money of going to the vet repeatedly while trying to figure it out. Here are a few of the most common signs of gravid females.

A pregnant female will typically seek out the cooler areas of her enclosure while pregnant, avoiding the heat lamp and attempting to stay as cool as possible. She may also bathe in her water bowl or wrap herself around it in an attempt to stay cool. Some females will also lie belly up on their backs. This is done to keep the developing eggs cool, as they are sensitive to heat.

Follicles, the egg-containing sacs in the ovary, will begin to develop, causing a lumpy appearance in your Python’s belly around 2/3 of the way down. She will look as if she has swallowed a bunch of marbles, rather than the more uniform swelling seen after a big meal.

Gravid females become heavier and thus rather uncomfortable, causing them constantly change their position and display strange behaviors. They may pace their enclosure constantly, seeking out cooler areas and then suddenly going to warmer areas, lie on their backs, and even refuse food. In fact, gravid females may go off their food altogether for a time, and this is nothing to worry about. Females should be fed extra before pairing with a male for this reason.

Females also tend to become somewhat aggressive during this time, and you should avoid handling your Python until her eggs have hatched.

During ovulation and pregnancy, you may find your Python changing color slightly, with her scales appearing lighter and more contrasting in appearance. This is often referred to by breeders as a “pregnancy glow” and is a good sign of pregnancy, although a similar process happens just before shedding.

About 2–3 weeks into pregnancy, females will begin a “pre-lay shed” to make more space for their rapidly growing bodies. Of course, this could just be their regular shedding too, so check to see if any of the aforementioned symptoms are present before getting too excited!

How Long Are Ball Pythons Pregnant?

After about 2–3 weeks, the female will enter her pre-lay shed, at which point, you’ll know there is about a month of pregnancy left. This shed is to make space for her growing body and developing eggs. You can now begin to set up her nesting box and make preparations for the coming eggs and hatchlings.

On average, females will lay around six eggs per clutch, but it can be anywhere from one to 11 eggs, and they can take up to 2 months to hatch.

In a process known as parthenogenesis, or asexual reproduction, some Pythons can lay eggs without any recent mating. While this is rare, Pythons and some other snakes have been recorded reproducing asexually, and the eggs are either infertile or clones of their mother. Most of these cases are due to stored sperm, however, as females may be able to store fertile sperm for 5–6 years! So, although your female may not have been in contact with a male for several years, she could still lay fertile eggs from stored sperm.

Other than an X-ray from your vet, there are other signs to look for in a pregnant Python. These include lumping up, distinct behavioral changes like cool-seeking or mild aggression, decrease in appetite, and color change. If your Python is under 3 years old or has definitely not had contact with a male, it’s highly unlikely that she’s pregnant. However, if she is displaying these signs, it’s a good idea to take her to the vet to make sure!