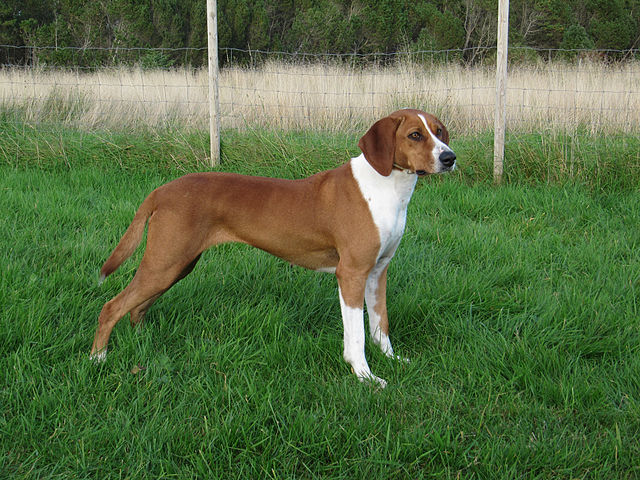 The Hygenhund is a medium to large scenthound from Norway developed in the 19th century and is also called the Hygen Hound or Hygen Dog. It was developed to hunt prey such as fox and hare and as well as being a great hunting dog it is also an active but affectionate family pet. It has a life span of 10 to 15 years and while popular in Norway is not really known outside of it and so is rare.

The Hygenhund was developed and bred in Norway in the first half of the 19th century by a Norwegian breeder called Hygen (hence the breed’s name). Its specific purpose was to hunt small game in particular like rabbit, fox, raccoon or hare. It was developed to have a great amount of stamina, be able to to handle arctic and difficult terrain for a long time without tiring.

Several hounds were used in its development some Norwegian and some from elsewhere including Germany and England. Dogs such as Beagles, Basset hounds, Bloodhounds, and English Pointers as well as Holsteiner Hounds and Scandinavian hounds. The result was a hound that used scent to track its game and who thrived even in difficult conditions. It became a much favored hunting hound for a time but at some point in the 20th century its popularity dwindled.

Even though this dog is both a hard worker and makes a good family pet its popularity has remained low. Outside of Norway there are very few dogs, and even in Norway the average number of puppies being registered each year is under 50. Breeders stick to strict breeding practices that prevent them from building up the breed with other dogs. It has though been recognized by the Norwegian Kennel Club and by the UKC (the latter in 2006).

The Hygenhund is a medium to large dog weighing 44 to 55 pounds and standing 19 to 24 inches tall. It is solidly built with a rectangular compact body, a strong back and level topline. Its legs are muscular and solid and its feet are compact. The tail is held high but does not curl over its back at all. They also have neck that is fairly long. Their head is triangular shaped and the skull is broad. Its muzzle is medium sized, it has dark eyes and the ears are wide. The coat is shiny, thick and straight and common colors are red, yellow, browns and black with occasional white markings.

The Hygenhund is an energetic, spirited and lively breed who likes to be busy and will work hard, play hard and also has an affectionate and loving side as a companion and family pet. It needs strong leadership from its owners and with the right care will be obedient, loyal and trusting with its family. With strangers though it is more watchful or wary and good socialization is needed to prevent suspicion forming and unnecessary aggression. It does not like strangers petting it.

It is an intelligent dog but can be strong minded and so is best with owners who have some experience. It also needs a family who have time to commit to it. It does not like having long periods of time being alone. It is alert and will bark to let you know if here is a stranger approaching or if someone is trying to enter your home. It is protective also and some will act to defend their family and home though they may not be as effective at guarding as larger more fierce dogs.

Being intelligent and actually being fairly eager to please and happy to learn, this dog is fairly easy to train, especially if you have some experience. It is able to do well at basic obedience training and can go beyond if you want to take it further. Just start training and socialization from a young when it is more able to soak it up and less inclined to ignore you. Socialization involves allowing it to meet and adjust to different people, places, situations, animals and sounds. With training you need to be firm and consistent but also gentle, patient and positive. Encourage and reward it, motivate it rather than punishing it..

How active is the Hygenhund?

This is a hunting dog, it was bred to work so it has a lot of stamina and can be active for long periods of time without becoming exhausted. It needs active owners that are happy when they are out being active too. If it is not being kept as a working dog it will need other jobs or roles or even training to complete to keep it engaged and happy. Mental stimulation is as important too as physical activity especially for intelligent dogs like this one. It is not suited to apartment living, it needs space and a yard and it is happiest if living in a rural environment. As well as going for two long brisk walks a day and having play time with you, a few times a week it need safe off leash time. Make sure your land or yard has good fencing, and when out walking always keep it in a leash. You can also take it with you when you go jogging, running or hiking for example.

It is easy to groom though its coat is long so it needs more regular brushing than some dogs. Expect to brush every other day or even daily to prevent tangles, remove loose hair and debris. Some owners also opt to have long coated dogs seen by a professional groomer now and then. There will be some hair around the home from its shedding, and it will shed heavier amounts during its blow outs with seasonal shedding. Only give it a bath though when it is dirty and really needs one. It is not a good idea to set a frequent and regular bathing schedule as that can dry out the natural oils it needs, as can using anything other than a shampoo made for dogs.

Brush its teeth with a toothbrush and toothpaste for dogs two to three times a week at least. That will help keep its gums and teeth healthier and its breath more bearable! The nails may need to be trimmed down when they get too long. Get yourself some dog nail clippers or scissors, do not use your own. Take a close look at those nails and make sure you can see where it changes color about half way down. Do not clip into the changed part, it will bleed and hurt the dog. Its ears should be checked once a week in case it has an infection – signs include redness, discharge, bad odor and such. Give them a clean after wiping carefully, never inserting anything into the ears.

The Hygenhund will eat about 3 to 4 cups of a good quality dry dog food a day split into at least two meals. The amount varies as it depends on how old it is, its size, level of activity, rate of metabolism and its health. Give it fresh water too.

How is the Hygenhund with children and other animals?

With children the Hygenhund can be good, affectionate, playful and protective as long as it is well socialized and trained. Make sure children are taught how to play and touch dogs in an acceptable manner. If it has also been raised with the children the bond will be much closer. Being raised with other dogs or pets it can also accept them as part of the family but keep in mind it is a hunter and its usual prey is small animals, so perhaps having pet rabbits in the same home is not a great idea.

This dog has a life span of between 10 to 15 years and is a healthy dog in general though there are a few issues to be aware of. These include hip dysplasia, bloat, anesthesia sensitivity, arthritis and von Willebrand’s disease.

In reports of dog attacks over the last 35 years in the US and Canada that have done bodily harm to people, there is no mention of the Hygenhund. As mentioned it can be aggressive if it is not well socialized in terms of strangers and it does not like them touching it. You should be aware of that and ready to stop strangers from patting your dog to prevent any problems. That said this is not a dog that is common in North America so the chances of it being involved in such incidents are greatly reduced. While all dogs have the potential to have an off day as good owners we owe them our commitment to making sure they are well socialized, trained, supervised, exercised, stimulated and loved.

A Hygenhund puppy will cost about $800 from a decent breeder of pet quality dogs but that could go up by a lot for a show dog, and keep in mind it is a very rare breed. Expect it to take time to find a breeder you are happy with and to be placed on a waiting list when you do. Do not use questionable options like backyard breeds or pet stores, or deplorable options like puppy mills. Rescuing a dog is always another option to consider. If you cannot find a Hygenhund there are other breeds or even mixed dogs in your local shelters and rescues, desperate for someone to love them and bring them home. Adoption fees tends to be around $50 to $400.

Annual costs to care for the dog are another factor in the price or cost of ownership. Basic health care like shots, flea and tick prevention, check ups and pet insurance will cost about $485 a year. A good quality dry dog food and dog treats will cost another $270 a year. Then miscellaneous costs like toys, grooming, basic training, license and miscellaneous items are another $665 a year. This gives a starting figure cost of about $1420 a year.

Looking for a Hygenhund Name? Let select one from our list!

This is a dog that is suited to people who will keep it as a hunting dog or working dog as well as a treasured companion. It can be a part of a family or be a pet for a single or couple but does need people to be around more than out. It needs experienced and active owners who can commit to seeing that it is kept happy and healthy as well as being well socialized and given at least basic obedience training, though it can go further.