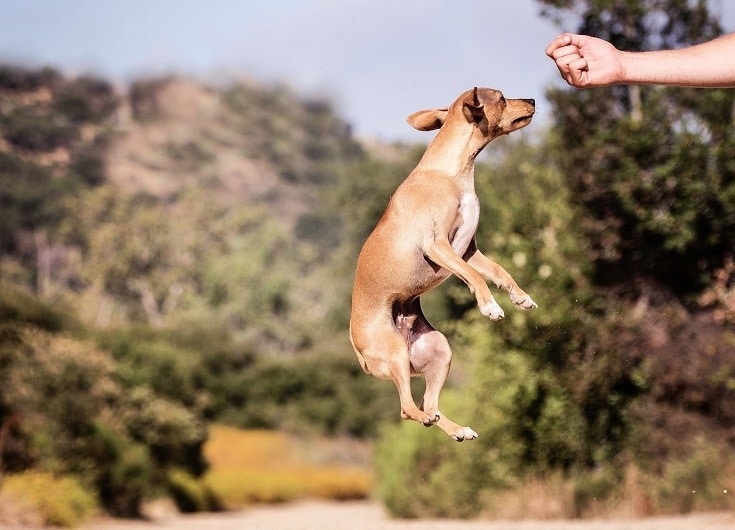 You’re used to it at this point: your dog running around like a holy terror, knocking over tables and toddlers and just being a complete menace.

It’s nothing to be worried about, right? After all, dogs are supposed to be incredibly high-energy animals!

That’s true in many cases, but in others, hyperactivity may be to blame. Canine hyperactivity is a serious issue that can cause many dogs to frustrate their owners and in some cases, can lead to them being given up for adoption.

If you suspect that your dog might be hyperactive, this guide will help you figure it out for sure, as well as give you insights into what to do about it.

What Is Canine Hyperactivity?

It’s important to understand that hyperactivity isn’t an official diagnosis. We don’t know what causes it for certain, and we don’t know whether some dogs truly have a mental condition or if they’re just naturally more excitable than others.

That said, a hyperactive dog is one that can’t sit still or pay attention, regardless of what you do. Training them can be a nightmare, as they’re too busy running around or digging up your lawn to focus on your commands.

These dogs often have difficulty developing impulse control. This could mean that they run off to chase another animal at a moment’s notice or that they snap at someone without giving the slightest bit of warning. As you might expect, these behaviors could put your dog’s safety (not to mention your family’s) at risk.

Virtually every dog will be excited and rambunctious at times, especially when they’re younger. However, hyperactive dogs will take this excitability to the extreme.

Symptoms of a Hyperactive Dog

These dogs are also usually difficult to train, as all these symptoms can make an obedience session a real nightmare. Unfortunately, hyperactive dogs really need to be well-trained.

The root cause of all of these negative behaviors is usually uncontrollable energy. Many dogs can be aggressive or destructive, but that doesn’t necessarily make them hyperactive; stress is usually a more likely cause.

That doesn’t necessarily mean that addressing their high energy levels will solve all the other problems, but it should help a tremendous amount. Once you can get your dog to sit still and focus, you can work on improving their obedience levels.

What Causes Hyperactivity in Dogs?

There is no known single cause for canine hyperactivity. It could be caused by any number of things, or it might not be a real condition at all.

The age and breed of the dog can play a huge role. Puppies are naturally more energetic and less disciplined than older dogs, and some breeds have more stamina and shorter attention spans than others.

Some experts believe that diet can play a major role. If your dog isn’t getting all the nutrients that they need, it could cause a chemical imbalance in their brain, leading to misbehavior. Diets high in cheap carbohydrates like corn and wheat may lead to uncontrollable bouts of energy.

Boredom is another potential cause. If your dog is cooped up all day with nothing to do, it’s no surprise that they’d lose their minds when you show up to play with them.

However, one of the biggest potential causes is also one of the easiest to control: your own behavior.

Are You Teaching Your Dog to Be Hyper?

Many owners who have hyperactive dogs likely taught their dogs to be hyperactive. How does this work?

It’s called “trained disobedience.” The idea is that if you quickly abandon training efforts due to normal issues with your dog’s energy levels or attention span, the dog will eventually learn that they don’t have to listen or obey you at all.

This can be even worse if you give up on a training session but give your dog a treat or affection, anyway. You’ll effectively be rewarding them for misbehaving, causing the behavior to be cemented.

Over time, your dog will learn that there are no consequences to ignoring you (and there might even be rewards!). Instead, they’ll just do whatever they want, and they rarely want to behave in a civilized manner.

What Can You Do If You Suspect Your Dog Is Hyperactive?

You have many options when dealing with a hyperactive dog, but first, you should try to pinpoint why you think that your dog is hyperactive.

If it’s due to trained disobedience, you’ll need to restart the training process and stick with it this time. If you need to, feel free to enlist the services of a professional trainer; after all, they spend most of their time breaking the bad habits that owners have instilled in their dogs, so this will be nothing new for them.

If you think that your dog is simply suffering from a lack of stimulation, then you should ramp up their exercise levels and provide them with more outlets for their physical and mental energy. This could include buying puzzle toys, introducing them to agility training, or hiring a dog walker to get them out of the house for a little while every day.

You should also take a long look at their diet. Make sure they’re getting all the vitamins and nutrients that they need, and consider switching them to a high-protein diet. Protein burns evenly throughout the day, so your dog should have a steady amount of energy, rather than spikes of uncontrollable activity.

If all this fails, you can take your dog to your vet and talk about putting them on medication. They’ll likely put your dog on some sort of stimulant, which will reduce your dog’s need for self-stimulation, leaving them free to focus on you.

Is Your Dog Hyperactive?

It can be difficult to tell the difference between a hyperactive dog and a normal, enthusiastic puppy. If you suspect that your pooch might be hyperactive, we recommend changing their diet and environment before putting them on any medications.

Don’t be ashamed to ask your vet for help if you need it, though. The important thing is to have a dog you can manage, even if you need pharmaceutical help to get to that point.