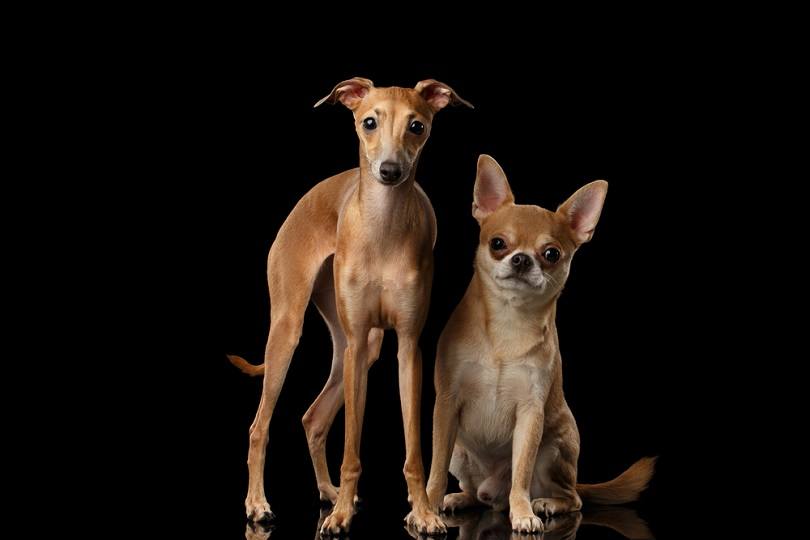 The Italian Greyhuahua is the offspring of two different purebreds, the Italian Greyhound and the Chihuahua. He is a small cross or mixed breed who has talents in racing and agility events. He has a life span of 13 to 16 years and is also known as an Italian Greyhound/Chihuahua Mix. He is a very loyal and devoted dog who can also be very inquisitive and curious about everything around him.

Where does the Italian Greyhuahua come from?

Being a deliberately bred mixed dog makes the Italian Greyhuahua a now called designer dog. While a small few designer dogs have origins known most come with no information apart from which purebreds are involved. Many also are given names that blend the parent’s names together. They have drawn a lot of attention amongst the public and the famous and some are more popular than others, attracting very high prices. When looking for one it is important to keep in mind that a lot of designer dogs are being bred by bad or ignorant breeders and puppy mills which are places to avoid. Also keep in mind that any mix can happen when it comes to these first generation dogs. Some can have the best of both parents but some may have a more ‘interesting’ mix.

The Italian Greyhound is an old dog having been around in one form or another for 2000 years. Why he was bred in the first place is not really known anymore it is assumed he was both a companion and a hunter of small animals. In the middle ages they had arrived in Europe and were very popular amongst the royal and the aristocracy, especially in Italy. He almost disappeared during the two world wars in Europe but thanks to the small population already in America they were saved.

Today he is affectionate towards his owners and loyal, can be sensitive and is reserved when it comes to strangers. He can be playful and he is intelligent and alert. He still has his hunting instinct and chases small animals, cars or really anything that moves! He has a short attention span though so training needs to stay short and fun. He needs a lot of attention and will act up if he does not get it.

The Italian Greyhuahua is a loyal and loving dog with a very strong possessive streak that means he can get very jealous when other people or pets are taking your attention. He bonds more closely with one owner and expects to be number one on their list. He is also very protective and despite his size if he thinks another dog is threatening you he will go after them, even if they are a lot bigger. He needs socialization then and close watching. He can be playful and very sweet and likes to follow you around and be physically close to you. He has a very inquisitive nature and likes to know what is going on. While he is devoted he needs lots of attention and will expect you to be devoted back! With strangers however he can be timid, again socialization will help. He is a sensitive dog too.

He is a small dog weighing 6 to 15 pounds and standing 13 to 15 inches. He has a muscled and sleek body similar to the Italian Greyhound but more stocky. He has strong legs, ears that can be like either parents and large eyes. His coat can be short to medium and silky to touch and comes in common colors like brown, white, black, silver, grey, blue and red. His head is apple shaped and he has a black small nose.

How active does the Italian Greyhuahua need to be?

He is a fairly active dog so will need some daily walks and time off leash somewhere where he can run free and play. He is a very fast dog so make sure when he is off leash it is somewhere fenced in. If he shows signs of being over excited or misbehaving at home this may mean he needs more walking. He is small enough to happily be an apartment dog if he gets enough time outside still. Some of its indoor play will go towards his needs, make sure he gets physical and mental stimulation.

While he is smart he is hard to train as he is stubborn and so he is not the best dog for a first time owner. Be patient with him while you use positive techniques. Offer him rewards and praise for his success and use something like treats as motivation. There are professional schools and trainers too that you can turn to if you need to. Along with early obedience training you should also undertake early socialization. It is a great way to get him more accepting of other people, pets and situations and makes him a better dog.

Living with a Italian Greyhuahua

The Italian Greyhuahua can be hypoallergenic as the Italian Greyhound is. When the coat is short it is easy to brush and keep looking healthy twice a week. Only bath him when he is dirty and really needs it. This way you can ensure the natural oils in his skin are maintained. Brush his teeth using a dog toothpaste and brush at least twice a week. Check his ears for infection and wipe them clean once a week, making sure you do not insert anything into the ear. His nails will need to be clipped when they get too long. You cannot cut too low as it will cause pain and bleeding so if you do not have the experience have it done professionally.

He is known to be very good with children, he will play with them, be friendly and affectionate and so on. Smaller children should be supervised in case they get too rough. He can get on with other pets but socialization helps and he does sometimes see smaller animals like squirrel as prey to chase. When coming across other dogs he can get over excited and some have the smaller dog syndrome so again socialization is key.

The Italian Greyhuahua is a dog that will bark occasionally and is not always a great watchdog, though some owners find he does well enough. He will need to be fed ½ to 1 cup of dry dog food each day split into at least two meals. Feed him a high quality food as it is better for him. As he is not good in the cold he will need dressing for it but most do not like wearing clothes.

The Italian Greyhuahua puppy can cost between $175 to $400. Other costs to pay for will include a crate, carrier, leash and collar, check up, shots, blood tests, deworming, neutering and micro chipping. That will come to between $360 to $400. Annual costs for medical basics like pet insurance, shots, check ups and flea prevention come to between $435 to $535. Annual non medical essentials like license, training, food, toys and treats come to between $265 to $365.

Looking for a Italian Greyhuahua Puppy Name? Let select one from our list!

This is a dog suitable for couples, singles or families with older children. He is loving and loyal and as long as you do not mind him following you around will be a great companion. You will need to look after him, train him and socialize him and be prepared for his stubborn nature, but he is a sweet dog and will certainly be a great new best friend.