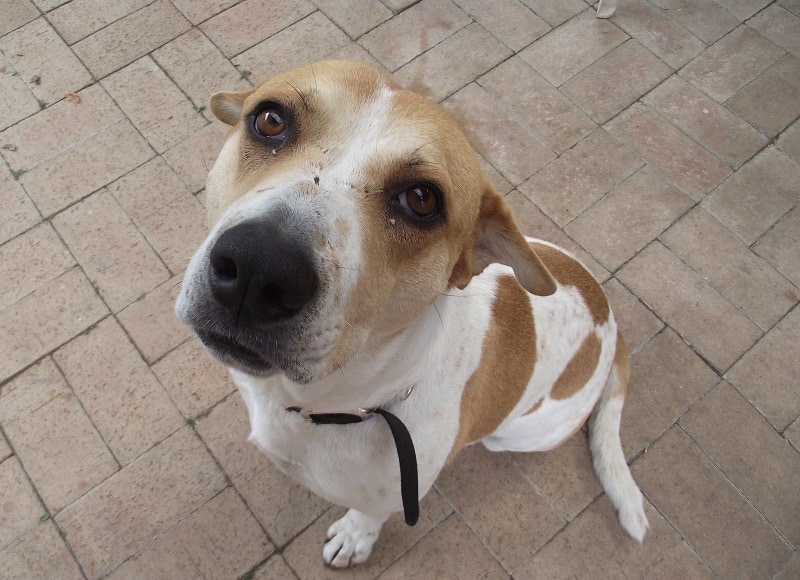 The Jack A Bee is also written as Jack-A-Bee and can also be called a Jack Russell Terrier-beagle mix. She is the result of breeding a Jack Russell Terrier with a Beagle and is a small to medium dog. She has a life span of 12 to 16 years and participates in activities that include sighting, hunting, agility and jogging. She is a very quick, bold and assertive little dog!

Where does the Jack A Bee come from?

The Jack A Bee is also known as a hybrid dog and is part of an increase in purposely bred mixed breeds, known as designer breeds, over the last two decades. It has become a popular trend to own such a dog, even celebrities can be seen with them, and this has led to an increase in mixed breeds though we do not know where most of them come from originally. We also do not know what intention there is behind these breedings, if there was any, or if they were bred by the large number of puppy mills or poor breeders cashing in on the trend. Be wary therefore of where you buy from. With details non existent or hazy at best to understand the Jack-A-Bee you can look at the parents.

In the mid 1800s the Jack Russell Terrier was developed in the South of England by Parson Russell who wanted to create a working dog who could work with hounds to hunt foxes. He became very popular with huntsmen especially those on horseback and by the 1930s became more well known in the US too. There though was some argument about how the dog was to compete in shows and whether he should remain a working dog.

Now the dog is energetic, very spirited and he packs a lot of spunk into a small body! He loves life and passes that enthusiasm on to those around him. He is loving and loyal to his owner and can be quite entertaining sometimes. He has to be watched as he is quick and will chase anything. He is smart but he is also willful so training can be harder than some dogs. Some Jack Russells do not do too well around other dogs even when socialized and he sees other pets as prey to chase all too often. He is bold but that can lead to him putting himself in danger. Long training sessions and too much repetition will bore him very quickly.

The history of this breed is not as clear as some. We know their ancestors were around as far back as 400 BC and references to beagle like dogs can be found from Roman times, to Norman times to Tudor times. The Beagle we know though was developed sometime in the 1800s when Reverend Phillip Honeywood established a pack that is thought to be the modern Beagle’s ancestors. They were bred for their hunting skills until another Englishman Thomas Johnson took them on and bred them for both hunting and for looks. When they were taken to America they were bred to be smaller so that they could hunt rabbit.

Today the Beagle is a sweet, entertaining, gentle dog with a bit of a naughty side. Often Beagle owners find themselves resorting to food bribes to to get their dogs to obey as they have a very stubborn side to them. They are also hard to house train. Beagles are also known for their baying so you may have to work on controlling his noise level. He is a scent hound so will run after a scent without a moment of thought. He is not good left alone for too long in the house as he gets bored quickly. He is very loving to his owner and friendly to everyone.

The Jack-A-Bee is a great pet as long as you are prepared for that level of energy and a certain amount of independence. She is playful, affectionate, loving and loyal as well as being clever, agile, lively and very out going. She can be stubborn sometimes and she is a bold small dog which can get her into trouble sometimes. She is athletic and protective and can act as a watchdog. She loves to have fun and be doing something and has a sometimes amusing sometimes aggravating mischievous side. While she will be loving to everyone in the family sometimes she bonds more closely with one person.

The Jack A Bee is a small to medium dog measuring up to 16 inches in height and weighing 12 to 30 pounds. She is a little larger and rounder than a Jack Russell Terrier. She has a flat head, and can have medium ears that hang down or short ears more like a terrier and a face that tends to look more like the Beagle. Her eyes are large and brown. The tail can also vary from long like a Beagle’s to cropped like the Jack Russell. Her coat tends to be short, smooth and coarse and comes in common colors like tan, white, black, brown, red and cream.

How active does the Jack A Bee need to be?

She is a fairly active to active dog even though she is only small. She needs to be taken out regularly for walks and play time. While she can adapt to an apartment as long as she gets taken out enough each day, she would also love access to a yard. She does like to chase other animals and she will run after a scent if it catches her attention. She is a curious thing so be sure to allow her time off leash in a secure area where she can investigate things safely.

Jack A Bees are smart but they can be stubborn so she is not best suited to a first time owner. You will need to have patience and stay firm, consistent but positive. When she is scared she can show it as aggression and early socialization and training can help her with this. Sometimes she is not easy to house train either. If you have experience with training it may go a lot easier for you, she can learn she just distracts very easily.

Living with an Jack A Bee

She should be brushed daily as she does shed. Bathe her just occasionally as she needs it to avoid drying out the natural oils in her skin. Use a dog shampoo only. She will need to have her nails clipped if they grow too long. Some owners opt to have a professional do this as there are nerves in their nails which means you cannot cut too low or you will cause pain and bleeding. Her teeth should be brushed at least two to three times a week using a dog toothpaste and brush. Check her ears once a week for signs of infection and wipe them clean using a dampened cloth or cotton ball. There are also ear cleaning solutions you could use.

For the Jack-A-Bee early training and socialization are especially important to curb some issues she can have. As mentioned she can be aggressive and nip when she is scared, she can chase other pets and she does not always get on with other dogs. With the socialization and especially if she has grown up with the children she is good with them. She does better with older children though who know that she is small and are less likely to tease or hurt her.

She may be small but she is a good watchdog and will bark to let you know of an intruder. She otherwise will be an occasional barker. Some Jack-A-Bees have the Beagle howl though. She will need 11/2 to 2 cups of high quality dry dog food, divided and fed to her at least twice a day. She is good for most climates but needs watching if it is especially cold in the winter.

Costs involved in owning an Jack A Bee

A puppy will cost somewhere between $350 to 700 though other factors might alter those estimates like location, the breeder you are buying from, the health and age of the puppy and how trendy that mixed breed is. She will need some initial costs paid for too for things like a collar and leash, a crate, spaying, a carrier bag, micro chipping, blood tests, deworming and shots. These will cost between $455 to $500. Medical costs each year for things like further vaccinations, check ups, flea prevention and emergency medical savings will be $460 to $560. Non-medical yearly costs for food, treats, toys, license, training and so on could fall between $450 to $550. This gives a total annual cost estimate of $910 to $1110.

Looking for a Jack A Bee Puppy Name? Let select one from our list!

The Jack A Bee is not a straightforward dog to own, she can be stubborn, a little harder to train, she is not good when left alone for too long and she is not at her best around other dogs! She will also need plenty of exercise, she is not a lap dog to stay home all day and be happy. She is though very sweet, friendly and affectionate and will be devoted to you and bring an infectious zest for life to the house.