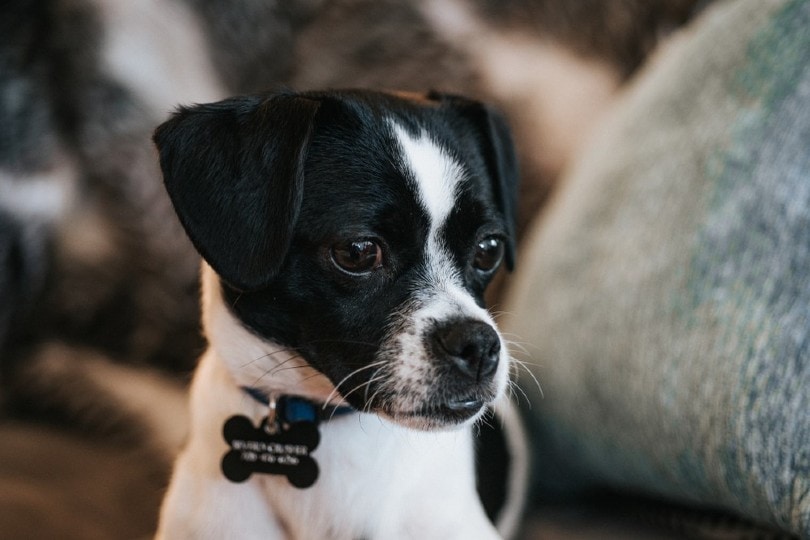 The Jack Chi is a cross of the Chihuahua and the Jack Russell Terrier. She is a small mixed dog who has talents in events including tricks, and agility. She is also called a Jackhuahua or a Chihuahua/Jack Russell Terrier Mix. She has a life span of 13 to 18 years and is a very energetic, loving and acrobatic little dog!

Where does the Jack Chi come from?

Over the last three decades or so there has been a great number of mixed dogs being deliberately bred and these are being called Designer dogs. They are the offspring of usually two purebreds of different breeds, called first generations. There is a mixed opinion on them, some dog people believe purebred is best, and some are just understandably concerned about how many puppy mills and bad breeders are using this as a chance to make money, and not taking care of their animals. Keep in mind that you cannot always guarantee the best of of two dogs to end up in the puppy you have. There could be any mix of genetics, you can get a wide range of different puppies even from one litter. With no history or origins known about the Jack Chi we have to look at the parents for a better idea.

It was Parson Russell who developed the Jack Russell Terrier in England in the mid 19th century. He was looking to create a dog who could hunt fox working with hounds. He was a popular option with horseback hunters. By the 1930s he had come to the US.

He is a spirited and energetic dog, enthusiastic about life and loving and loyal with his owner. He can be highly entertaining and loves to chase and is quick too. Though he is smart he is also willful so training can be hard. Sometimes he is not great with other dogs and he likes to chase smaller pets as prey so early socialization is very important. Training should be kept short and interesting.

The Jack Chi is a friendly and playful dog who is also very affectionate and has a lot of energy. She tends to bond more closely to one owner and is quite protective. She is alert and fairly intelligent and her love of fun can make her very entertaining with acrobatics she jumps high and runs fast. She has a curious nature but those playful moments are often mixed with calm moments when she likes to cuddle and burrow in her blankets – or yours. She loves getting lots of attention and is friendly to other people. Some can be hyper though and can become overly nervous all the time.

She is a small dog weighing 8 to 18 pounds and standing up to 15 inches tall. Her coat can be short and shiny, or wiry or longer depending on the coat of her two parents. Common colors are cream, white, golden, black, tan, brown, tricolor and chocolate. Her body is similar to the Jack Russell’s, long and muscular but her legs are short like the Chihuahua and her head can be triangular shaped. She has a long nose that is black or pink and large eyes. Her ears can be erect and triangular like the Chihuahua or floppy like the Jack Russell’s. Her tail is long and can have a knot.

How active does the Jack Chi need to be?

This is a fairly active dog who will need regular walks twice a day outside and an occasional trip to a dog park or a safe off leash place where she can run free. She likes to follow scents she catches so keep her leashed when not somewhere safe. She is very agile and as well as being a fast runner she can jump very high too. This means if you do have a yard she can play in it needs to be well fenced with high walls. She can live perfectly happily in an apartment or small living space due to her size as long as you take her out daily. She has quite a bit of stamina.

The Jack Chi is a hard dog to train in man cases and is therefore not the best dog for a first time owner. She will test your patience with her stubborn side so persevere through it being calm and consistent. Use positive training techniques with her involving treats, rewards and praise and avoid punishment or becoming impatient. Stay firm as her pack leader. If you need to, find a school or professional trainer who can offer you some help. Training and early socialization are very important responsibilities of a dog owner and are one of the most important things you have to do for your dog. She is more likely to get on with others, deal with different situations, better deal with being left alone and so on.

Living with a Jack Chi

If she is short haired grooming is fairly easy, she will need a brush a couple of times a week. Longer hair means more tangles can happen so brush it more often. Wiry hair means she may need trips to a groomers every couple of months. She does shed a moderate amount and that can be worse around seasonal shedding times. Give her a bath just when she is dirty and is needing one so that you do not damage her skin’s natural oils. Her nails will need to be trimmed when they get too long. Dog nails have live nerves in them so take care or have it done by a groomer. Her ears should be cleaned by wiping them carefully once a week, and just check them for infection signs. Her teeth should also be kept clean by brushing with dog toothpaste and brush at least twice a week.

She can be good with children, she likes to play with them and run around and have fun. She can also be gentle and affectionate towards them. She can be good with other pets too but with smaller animals she may be inclined to chase them as prey to hunt. Socialization will help this and how she gets along with other dogs as she can be bossy and does not care she is so much smaller than most of them.

She is not always a great watchdog and will otherwise bark occasionally. She should be fed ½ to 1 cup of good quality dry dog food a day, split into two meals. She can be picky, but some are also likely to overeat if you let them so keep a track of what she is eating.

The Jack Chi can inherit health issues from her parents. They include Patellar Luxation, Hypoglycemia, Heart problems, Eye problems, Collapsed Trachea, Hydrocephalus, Open Fontanel, Legg-Calve-Perthes disease, Deafness and Shivering. To have better chances at having a healthy puppy and dog, visit the breeder to check on conditions and ask them to show you health clearances for each parent.

A Jack Chi puppy can cost between $200 to $750. Other costs will be getting her a crate, carrier, food bowls, collar and leash along with some medical tests like blood tests, and having her dewormed, check over, vaccinated, micro chipped and eventually spayed. These come to between $360 to $400. Medical basics each year will cost $435 to $535 and that is just for annual check ups, vaccinations, flea prevention and pet insurance. Other essentials each year like food, license, training, treats and toys come to between $265 to $365.

Looking for a Jack Chi Puppy Name? Let select one from our list!

The Jack Chi is a great family dog as she gets on well with children. She is still a typical small dog though so socialization and early training are important. She will entertain you and be very loyal to you. If you want a dog with character, energy and agility that is also a great lap dog who enjoys her cuddles this could be the dog for you.