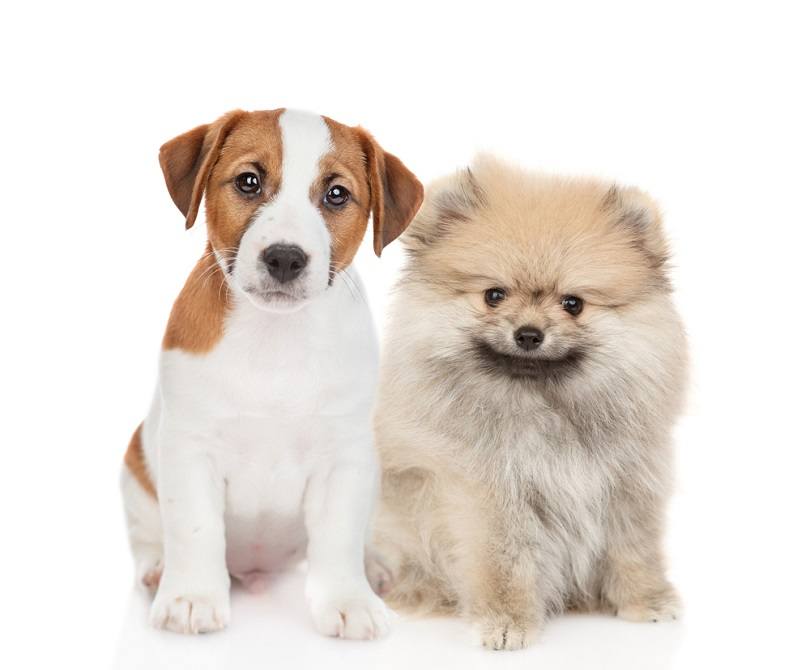 The Jack-A-Ranian is a small cross breed mixing the Pomeranian with the Jack Russell Terrier. He is multi-talented taking part in shows and working activities such as watchdog, search and rescue, agility and hunting. He has a life span of 13 to 15 years and is in the breeding group of toy and terrier. He is a lively spirited little dog, very friendly and happy in any social situation.

Where does the Jack-A-Ranian come from?

This dog is a hybrid dog also known as a designer dog. While mixed breeds are not a new thing and in fact purebreds were once created by breeding different dogs together the creation of designer dogs, deliberately breeding purebreds together to get a mixed dog, is something that has become popular in the last twenty years or so. It has become super trendy to have a dog like this which has unfortunately attracted puppy mills and disreputable breeders who just want to make money. One problem with these dogs is most have no information about them, who bred them, why, where and so on. To get a feel of the Jack-A-Ranian we look at the Pomeranian and Jack Russell Terrier to get an idea of looks and personality.

This dog was developed to be a companion and gets his name from the province he comes from, Pomerania. When he was first bred he was bigger, weighing around 30 pounds. He was always popular and many well known names through the ages can be linked to owning one, such as Newton, Michelangelo, Martin Luther and Mozart. In the 18th century the dog came to England when a Princess from a region neighboring Pomerania married an English prince. She came over with a pair of Poms who then weighed around 20 pounds. The breed became popular amongst the rich rather than the common people. During Queen Victoria’s reign she also became fond of Poms but she liked the smaller size at 12 pounds. When she was dieing she asked for her favorite dog to lay with her and that was a Pomeranian. English dog breeders began to breed Poms smaller and with more color. In the 1880s he went to the US.

Today the Pomeranian is a very outgoing, social and clever small dog. He loves meeting people, he tends to act like a larger dog so can get himself into trouble, and he gets on well with other pets. He is quite curious and lively and being alert he is a good watchdog. His barking can be a problem so training will be important so that you can command him to stop!

The Jack Russell was bred by a Parson John Russell in the mid 19th century in the south of England. At the time hunting foxes using hounds was a popular sport, especially for hunters on horseback. The Jack Russell Terrier was bred to hunt with them, find the fox in his den and have the fox bolt so the horses and hounds could then give chase. The Jack Russell was very popular as he was very good at his job. In the 1930s he came to the US where some argument came up about whether he should be kept as a working dog or put into shows. For that reason more than one club was formed.

Today he is very vibrant and full of life, a small dog with a lot of personality and often quite amusing. He is loving and devoted to his owner but he can be harder to train sometimes because he can be stubborn. He is friendly to people but may see other animals as prey to chase, and be aggressive to other dogs so early socialization and training are important.

The Jack-A-Ranian is a loving, lively, social small dog who loves to be active and would happy to run around and play all day! He is alert and intelligent but can be excitable. He loves to be with people and is very affectionate but also gets jealous quickly if he perceives he is not getting the attention he is due. He is a happy dog who wants to be around his owner all the time and can be protective, sometimes overly so.

The Jack-A-Ranian is a small mixed breed weighing 6 to 14 pounds and measuring up to 15 inches tall. He has pointy ears, a black nose, a muscular body that is well proportioned and dark oval shaped eyes. His coat is double, short and thick, straight and comes in various colors including brown, black, gray, chocolate, white, orange, cream, silver, red and golden.

How active does the Jack-A-Ranian need to be?

This is a fairly active dog so be prepared to give him the activity he needs. Sometimes people will opt for smaller dogs thinking they will need minimal if any walking or outside activity but this is not the case for the Jack-A-Ranian. He may be small but he needs daily walks, play time and things like trips to a dog park sometimes. Without this he may become poorly behaved out of boredom, and he may also be less healthy. While he can live in an apartment as long as he gets the exercise he needs, ideally he would have access to even just a small yard. Be sure to offer him opportunities to be mentally as well as physically stimulated.

He is fairly easy to train as he is smart and usually is keen to please. However some Jack-A-Ranians have a stubborn side or are so excitable that they can become easily distracted. Therefore stay firm but positive in your training methods. Keep sessions short and interesting so that he does not get bored and try to carry them out where he will not find something more interesting to do! The main thing with this dog is he has a tendency to bark a lot and training is a way you can command him to stop should he get started. Early training and socialization are also key in his interactions with other dogs, whom he can be aggressive towards, and other pets, who can view as prey to chase.

The Jack-A-Ranian will need a moderate amount of maintenance, he does shed regularly so you will need to vacuum up after him. Some can be hypoallergenic if they lean more towards the Jack Russell. However if he has longer hair and is more like the Pomeranian it is unlikely. Longer haired ones should be brushed at least twice a week up to every other day. Just give him a bath when he gets dirty. Often Jack-A-Ranians love water so bath time is fun and he is likely to play and get you and bathroom a little damp! Clean and check his ears once a week, trip his nails when they get too long and brush his teeth using a dog toothpaste and special toothbrush at least two to three rimes a week.

He is good with children and is usually playful and loving towards them, especially if he has been raised with them. He is usually also friendly other pets and other dogs once early socialization and training have been done. Children should be taught how to safely play with him though especially with his size.

He is an alert dog and makes a good watchdog if that is something you want in your dog. He barks occasionally, some more than that, so training is important to control that especially if you live in an apartment. He is better in cold weather than in the heat and if you live where it gets hot during the summer months you should watch him carefully. He will need ½ to 1 cup of high quality dry dog food a day split into two meals.

The Jack-A-Ranian should not have too many health issues but there are some things you can do to imporve the odds on having a healthy animal. Research the breeder you are considering buying from so you get only someone who cares about the dog’s welfare. Also ask to see health clearances. The parents of the Jack-A-Ranian are prone to the following issues so it means it is possible their offspring is too. Legg-Calve-Perthes Disease, deafness, patellar luxation, eye problems, epilepsy, collapsed trachea, allergies, hip dysplasia and dental problems.

Costs involved in owning an Jack-A-Ranian

A puppy of this mixed breed will cost between $200 to $500. You should have your puppy checked at a vet who can do a physical, run some blood tests, deworm, vaccinate, neuter and micro chip him. You will also need a collar and leash, crate and carrier bag. These initial costs will be between $360 to $450.

Looking for a Jack-A-Ranian Puppy Name? Let select one from our list!

This dog is a great companion but especially suits families since he is so energetic and playful. He will expect a lot of attention from you and preferably should have access to at least a small to medium yard. During hotter days he needs to be kept inside and give him fresh water often. If you can give him regular exercise and lots of attention he will thrive with you and love you always.