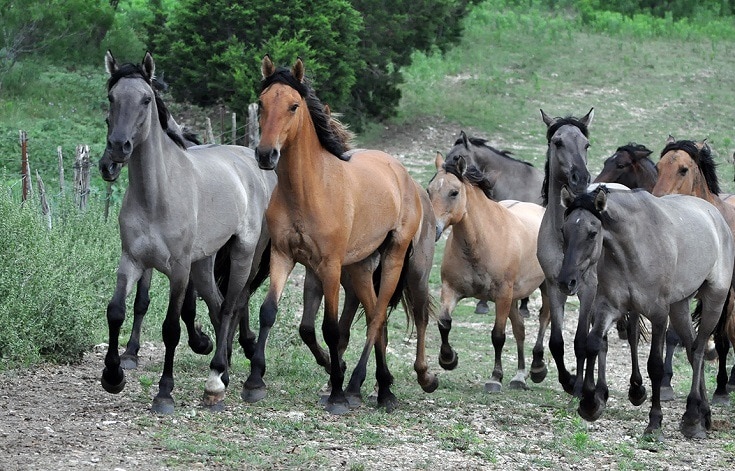 The Kiger mustang is a name particular to a breed of feral horse with several key characteristics. The name only applies to those horses that are wild-captured. If the horse has been bred in captivity, even from purebreds or ferals, it is simply referred to as a Kiger horse. Kiger mustangs can be adopted or purchased, but they are wild horses and this presents many unique challenges.

The Kiger mustang is a descendant of Spanish horses that were first brought to the south-eastern area of Oregon in the 17th century. This bloodline was believed to have disappeared until the Kiger mustang was discovered and DNA testing was conducted on the horse.

The Kiger mustang is a wild breed of horse that must have been born wild to be given such a label. Those born in captivity, regardless of their progeny, are just called Kiger horses.

Horses were introduced to the American West in the 1500s when Spanish explorers brought them from overseas. The horses escaped or were stolen and their descendants crossed with other horses left by European settlers. It was believed, by the 1970s, that the Spanish stock had been bred out of these wild mustangs, but a roundup of ferals in the Beatys Butte area in Harney County, in 1977, resulted in the discovery of a group of horses with similar markings and colors. DNA testing showed that these horses were closely related to the Iberian horses brought by the Spanish. These horses were separated and, in a bid to preserve the breed, they were moved to the Steens Mountain.

Roundups take place every three or four years, and approximately 120 horses are kept for the Kiger HMA herd and the Riddle Mountain HMA herd. Any excess horses are then auctioned off to members of the public, and these horses are referred to as Kiger mustangs. It is worth noting that no Kiger mustangs, even if they were to remain unsold or are deemed unsuitable for adoption, are killed as part of this process.

How Much Do Kiger Mustangs Cost?

Kiger mustangs are auctioned off every three or four years. During these auctions, members of the public are invited to bid on the horses. Bidders must be able to show that they have somewhere suitable to keep the horse before they can begin bidding for them. Prices average about $1,000 but can reach as high as $7,000 or more. This is a much higher cost than the $125 fee typically associated with walk-up mustang costs.

Owning a Kiger mustang is very different from owning any other type of horse. While the breed is known for being adaptable and can be broken and trained, it is still a wild mustang. They are agile and intelligent, they have plenty of stamina, but they are also considered gentle and calm.

The Kiger mustang is usually a dun color but may also be found in other solid colors. The breed registry includes several variations of the dun color, and it also lists bay, black, and roan as being acceptable colors for the breed.

It is a compact horse but is very muscular and their color and appearance make them a highly desirable breed during the auctions. The horse may have one or primitive markings, including a dorsal stripe or zebra stripes on the upper legs. The horse has a deep chest and short back and they have the appearance of being a very physical and agile athlete of a horse.

How to Take Care of Kiger Mustangs

Caring for a Kiger mustang is very different from caring for any other horse. They can become great companions and highly skilled competitors, but they are, first and foremost, wild horses.

Adopting a Kiger mustang means that you are taking on a wild horse that has already been owned. This means that it may have been mistreated or neglected by well-meaning individuals that did not know what to do with a wild horse once they purchased it. Gentling a neglected horse takes even more work, and you should expect some difficulty breaking a horse like this in.

When adopting a Kiger mustang from the Bureau of Land Management (BLM), there is a process that the adopter must undergo. For the first year of the adoption, the adopter agrees that the BLM can collect and rehome the horse if it is neglected or no longer wanted. If, after the year passes, the adopter wishes to keep the horse, they need to have it inspected. A certified individual will come and check to ensure that the horse is kept in good condition and is not being abused or mistreated. Once the inspection is passed, the horse becomes a titled Kiger mustang and it can be traded like any other horse.

Do Kiger Mustangs Get Along with Other Pets?

As a wild horse, the Kiger mustang is used to being around other wild animals. It is considered a level-headed horse and does not spook easily. In fact, owners will often regale people with tales of Kigers staring down motorbikes without showing any fear. With that said, horses are very big and strong animals and you should always take care when introducing them to other animals, whether it is dogs or other horses. You should also ensure that any humans you introduce to the Kiger mustang know how to behave around wild animals.

The Kiger mustang is a wild breed, which means that it is a hardy and healthy breed with a life expectancy between 30 and 40 years. You should provide it with a good diet, ensure that it has plenty of room and good feed, and spend time with your Kiger, especially if you want it to become a well-adjusted horse that is good for riding.

The Kiger mustang is a feral horse. If two wild-captured Kiger mustangs were to breed, the resulting horse would be officially recognized as a Kiger horse, not a mustang, if it was born in captivity.

Are Kiger Mustangs Suitable For You?

Not only are they a rare horse breed, but to be considered a true Kiger mustang, the horse must be born feral and not in captivity. Roughly 100 or so of the breed are auctioned to members of the public every three or four years, and adopters must undergo a year-long adoption process to ensure that the horse is being cared for and that it is being kept in a healthy state.

The breed is well-known for being level-headed, having an incredible sense of self-preservation that extends to its rider, once the horse trusts you. Hardy and healthy, the breed can live up to 40 years, is highly sought after, and is a great addition to your stable, as long as you’re willing to put in the time and effort initially required.