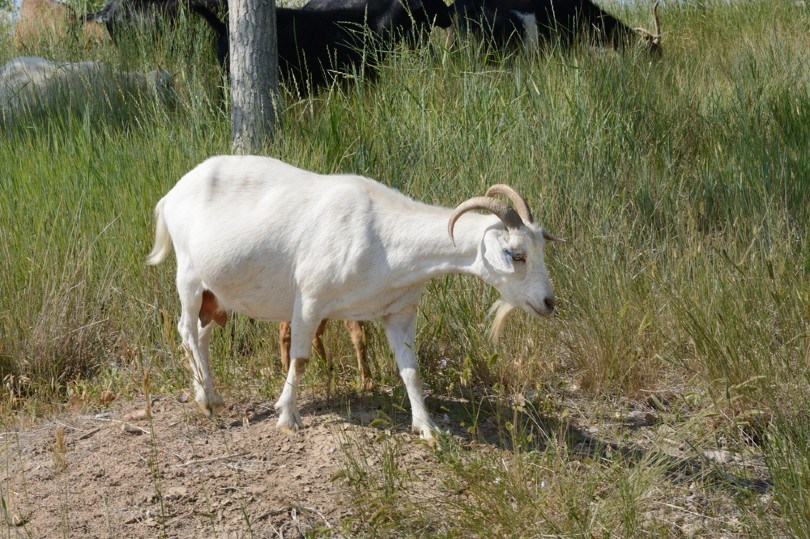 If you’re the type of person who loves goats, you may have seen a new breed popping up over the past 25 years or so: Kiko goats.

This breed, imported from New Zealand, has started to be favored by farmers and ranchers in the United States. This is due to the fact that they’re easy to care for, have long and productive lives, and are extremely parasite resistant.

While the goats are mainly kept as livestock at the moment, they can make good pets as well, provided that you know what you’re doing. If you want to learn more about this interesting new breed, this guide will fill you in on all the pertinent details.

The name “Kiko” is derived from a Maori word meaning “flesh” or “meat.” That should give you all the information you need when determining what these animals are most often raised for.

This is a relatively new breed, only cropping up in the 1980s. It was created by goat farmers named Garrick and Anne Batten, and they crossed feral goats with a variety of dairy goats. The result was an animal that was hardy, fast-growing, and had extreme parasite resistance.

To say that the Battens were successful in this attempt would be an understatement. Their Kiko goats have shown the ability to thrive in a variety of harsh climates, including the hot, humid southeast portion of the United States.

This is important because drug-resistant parasites have been running rampant in that region for years. While pesticides have failed when it comes to controlling these parasites, the Kikos have been much more successful, and they figure to only grow more popular in the years to come.

Their temperament is another big reason that they’re so popular. They’re docile but not passive, and they tend to be amiable and agreeable. They’re also fearless, so you’ll need to protect them from predators, as they’re not likely to back down on their own.

They’re easy to train and direct, and managing an entire herd is not difficult. This also makes them wonderful pets, although they’re rarely kept for that purpose.

How Much Do Kiko Goats Cost?

The cost of a Kiko goat will vary depending on the pedigree that you’re paying for. On the high end, you can expect to pay over $1,500 for a pedigreed buck.

However, most commercially bred animals go for far less, usually around $500. This relatively low price, combined with their relatively long lifespans, make them an excellent choice for building a herd.

If you’re planning on buying a high-end, pedigreed animal, you may want to invest in DNA testing to ensure that you’re actually getting what you paid for.

Kikos are known for being docile but not passive. They’re not particularly stubborn, but they won’t be pushed around either. If you can convince them that something is in their best interest, they’ll gladly go along with it.

They do their own thing for the most part. This isn’t a breed that will turn and run at the first sign of danger, usually preferring instead to wait around and feel the situation out.

They aren’t aggressive among themselves or other animals, and they generally prefer to be left alone.

Most Kikos are either white or cream colored, although you’ll find darker ones out there as well (in fact, darker-hued Kikos are becoming increasingly more common).

They have dense coats that grow long and sweeping in cold climates. They have long ears that are often erect but can droop to help keep them warm, as well as stout bodies that are well-muscled.

Bucks are easy to spot due to their long, sweeping horns. However, given that these animals aren’t usually aggressive, you’ll rarely get to see them put those horns to use. They make wonderful decorations, though.

Kiko goats grow rapidly and can produce two kids per year. This lets you quickly develop a hearty herd, and the kids will contribute to the bottom line in no time at all, as they rapidly reach their weaning weight.

As of now, there is only the one variety of Kiko goat, but given how successful that breed has proven to be, it wouldn’t be much of a surprise to see these animals branch out in the years to come.

How to Take Care of Kiko Goats

One of the reasons that Kiko goats have become so popular so quickly is because they’re a low-maintenance breed. You won’t need to provide much in terms of food or healthcare, provided that you give them plenty of space to roam and forage.

Nevertheless, there are a few things that you need to know about keeping these animals.

These goats need plenty of space, as they’re aggressive foragers. However, they can make do with just about any environment, provided that there’s plenty of ground cover for them to munch on.

You will need to be careful when it comes to protecting them from predators, as Kikos aren’t known for being respectful of large animals with pointy teeth and claws. When faced with danger, they’ll likely stand their ground, which often ends poorly for them. This means it’s up to you to keep them safe.

You’ll also want to have good fencing to keep them from roaming. They enjoy a varied diet, and they’re willing to travel to find new foods to munch on. As a result, you should try to provide them with as many suitable foods as possible to limit their natural restlessness. Still, a trustworthy fence is much more reliable than a rich and varied diet.

That fence needs to be high too. These goats can stand up to 6 feet high on their back legs, so they can easily clear a low fence — and they will, too, if they feel that there’s something worthwhile on the other side.

This adaptability and willingness to eat almost anything are big reasons that these goats are often used for land management purposes. They are pros at clearing underbrush in fire-prone areas, and they can eradicate problematic weeds in your fields or backyard in no time flat.

Kikos thrive in all but the most severe climates, and they’ll naturally regulate their coat growth to adapt to the local climate. You shouldn’t need to provide much in the way of shelter or bedding to keep them warm and safe.

They’re not prone to foot rot, so you don’t have to worry about turning them loose in moist soil. They thrive in damp environments, in fact, and are popular in humid regions like Florida.

Do Kiko Goats Get Along With Other Pets?

Kikos are well-known for being easy to get along with, making them suitable co-grazers with a variety of other livestock. As long as the other animals leave the Kikos alone, the Kikos aren’t likely to cause any problems with them.

They make excellent herd animals, as you’ll rarely see intra-species aggression. You can turn them loose in any pasture or field, in just about any numbers, and not have to worry about behavioral problems.

Many ranchers like to pair Kikos with cattle, as this helps improve the use of forages. This is especially predominant in areas where weed control is a problem, as the goats will clear out the invasive species, leaving more resources behind for grass to grow.

Best of all, since Kikos are highly resistant to internal parasites, you don’t have to worry about them getting your other animals sick (or vice versa). This should help reduce overall parasite levels as well.

If you’re keeping a Kiko as a pet and you have other animals, such as dogs, in the house, how well they get along will depend almost entirely on the other animal. Kikos will tolerate just about any other species, provided that they don’t hassle them too much, of course.

What to Feed Your Kiko Goat

Kikos don’t need much in the way of a specialized diet, and they require much less supplemental feeding than other goat species. As long as you have plenty of vegetation growing in your area, they should be fine.

Keep in mind that they’re descended from feral goats, so they know how to scrounge and fend for themselves. They rarely require much in the way of human intervention, so you won’t have to constantly monitor their diets (although they will wander off if pickings are slim).

If you’re keeping one as a pet or you just want to make absolutely certain that they’re getting enough to eat, then you can provide them with quality hay, legume grasses, silage, and even food pellets. They enjoy a varied diet, so feel free to mix it up, but don’t worry if you can’t. These animals are survivors — they’ll make do on whatever they get.

Kiko goats are self-reliant, requiring little help from humans to survive and thrive. As a result, you won’t have to provide much in the way of healthcare to these animals.

They rarely require intervention due to parasites and even manage to be fairly self-sufficient when giving birth. This will be one of the lowest-maintenance animals that you could ever own.

If they do require healthcare, take them to the vet immediately. One of the downsides to having an animal this healthy is that you might be slow to provide them with medical assistance when it’s necessary, so regular checkups are a good idea as well.

They’ll likely require periodic hoof trimming and occasional deworming, but even these are less frequent than you’ll find with other breeds.

Ultimately, though, as long as you provide them with plenty to eat and protection from predators, you shouldn’t have much to worry about with a herd of Kikos.

Kiko goats don’t need much help when it comes to breeding. For the most part, it’s simply a case of putting bucks and does together and waiting for nature to take its course.

They’re active breeders and require little help with childbirth. Most does are capable of creating two kids per year, and those kids generally find plenty of milk to drink, helping them to grow and wean quickly.

Kikos breed at all times of year, and does become sexually mature as early as 4 months of age. However, it’s generally recommended to wait until does are at least 8 months old and at least 80 pounds before you start trying to breed them.

Kiko does make attentive and capable mothers, so you won’t have to handle much of the kid-rearing yourself. This is why many people who raise Kikos for profit allow the bucks to intermingle freely with the does; there’s little downside to frequent breeding, but potentially a great deal of upside.

Are Kiko Goats Suitable for You?

If you’re already raising goats or if you’ve always been curious but didn’t know where to start, then Kiko goats can make a great investment. They’re hardy, simple to raise, and easy to get along with.

As a result, they’re raised for a variety of reasons, including meat, milk, land management, and even recreational use. They make low-maintenance pets, and they generally tolerate humans, although they may not be as affectionate as some other animals that you might consider owning.

At the end of the day, you’ll need to decide if you want to own goats at all. If you do, there’s little reason not to get Kikos.