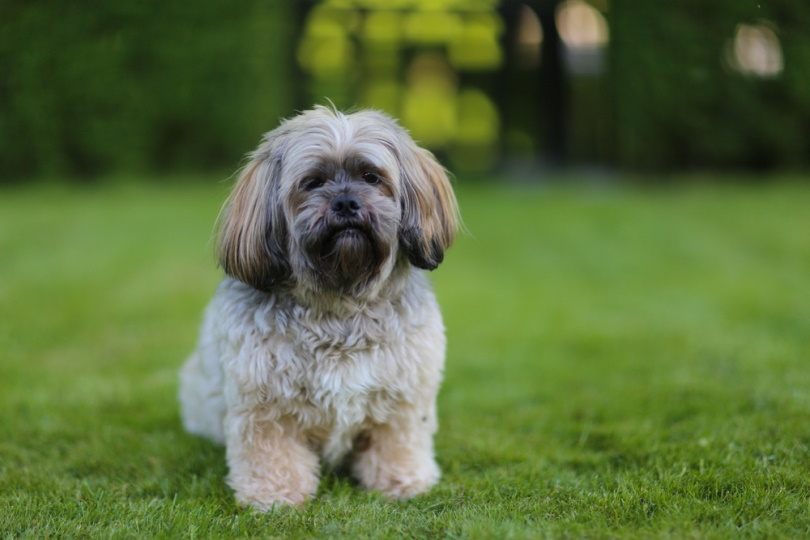 The La-Chon is a mixed breed the offspring of a Bichon Frise and a Lhasa Apso. He is sometimes called a Lhasa-chon and has a life span of 12 to 16 years. He has talents in retrieving, watchdog, jogging and tricks. He is a small dog with a stubborn willful side but is super affectionate and loves to cuddle!

Where does the La-Chon come from?

A mixed breed or a hybrid dog, the La-Chon is a part of a trend in what are called designer dogs. These kind of dogs, have surged in popularity over the last couple of decades, most are breeding two purebreds together, they often have a name blending those two breeds. Some are created by good breeders but many are not, so care needs to be taken if you want a designer dog as a pet. With the majority of them there is not much known about who bred them first and why so to get a better feel for the traits and looks the La-Chon could inherit here is a look at the parent breeds.

The Bichon Frise is believed to descend from the Barbet but precise origins are not known. He comes from the Mediterranean and when he came to Europe he was very popular with the aristocracy as a companion dog. He can be found in Spanish, English and French courts and continued to be favored for several hundred years. However in the late 19th century his popularity fell and he became thought of as a common dog. Many circuses and organ grinders had Bichon Frise as a performing dog as part of their act because they learned tricks very well and were cute to look at.

The Lhasa Apso is considered a sacred dog where he comes from, which is Tibet. His name comes from Lhasa the holy city there. He has been around for thousands of years and was not a dog owned by common people until very recently. He was bred by nobility and monks only and his purpose was to protect them and guard them. Throughout history the Dalai Lama has gifted pairs of this dog to people in other countries he deemed worthy, and that was the only way the dog was allowed to leave Tibet. The dog was believed to bring with him good fortune and prosperity. He came to America in 1933 when a pair were gifted to a naturalist and world traveler. He then used them as his foundation for a kennel.

The Lhasa Apso today is still very much a protector and watchdog. He is very protective of his owner and family and will remain aloof with strangers until he gets used to them and judges they are not a threat. He does take longer to mature than most dogs and has an interesting mix of traits being playful but regal, happy and fierce, devoted but independent. He tends to try and set himself up as the top dog and has to be taught and reminded often who is pack leader. He does not require a lot of activity, a couple of short walks and some play is enough. While he is independent he will follow you to stay close to you around the house. But he is better at being left alone for moderate amounts of times.

The La-Chon is intelligent, willful but also extremely affectionate and loves to cuddle. He is a very cheerful dog with lots of energy, he will be playful sometimes and very outgoing. He learns tricks very quickly and loves the attention of performing them. While loving to his family he may nark at strangers. He is good with children and eager to please but he is not as good with other dogs or pets unless given early socialization and training.

The La-Chon is a small dog weighing 8 to 20 pounds and measuring 10 to 18 inches in height. He has flappy ears, wavy fur that can be longer at the tail and legs then the rest of the body. Common colors are white, brown, black, cream and golden. His head is round, short muzzle and almond shaped eyes that occasionally can come in a blue color.

How active does the La-Chon need to be?

He is not a super active dog but can be energetic so a couple of walks plus some play are enough for him. He can love in an apartment but access to a yard is a bonus and gives him a place to play and engage his curious nature. He is bold and will chase other animals so keeping him on a leash is a good idea.

His training will be moderately easy, he will not be harder to train than most dogs but not easier either just because he has that stubborn streak and he can be hard to house train. Be firm, consistent, positive and patient! Crate training is definitely something recommended for this dog. Early socialization and training will ensure you get a well rounded dog who is the best he can be and it will make life as a dog owner a lot easier.

There is going to be a moderate amount of grooming and maintenance needed for the La-Chon. There is going to be very little shedding so at least there is not that to clear up after and he can be good for people with allergies. However his long hair means snarls and mats can occur so regular brushing is important and he will need professional trimming at a groomers every few months. He needs a bath when he gets especially dirty and make sure you dry him off after very well. Check his ears once a week for infection and wipe then clean. Long hairs need to be plucked out of them too. Brush his teeth two to three times a week and have his nails trimmed when they grow too long.

In general he is good with children and is affectionate towards them and playful with them. He can be overly bold with other dogs and needs to be supervised around strange dogs. Early socialization and training will help with this.

He will need ¾ to 1 1/2 cups of good quality dry dog food a day, split into a minimum of two meals. He is alert and wary of strangers so makes a good watchdog. He barks occasionally and can easily live in an apartment. He is best moderate climates not extremes.

To have a healthy puppy who grows into a healthy dog there are a few things you can do to improve the odds. First of all even if it means looking longer buy from a good breeder. Sometimes what may appear to be a breeder that knows what they are doing actually proves to be quite the opposite. You should also expect to see health clearances ideally for both parents. You should visit the puppy at the kennel before buying. There are potential health issues that the parents have that could be passed down to their offspring. With a La-Chon these include eye problems, patellar luxation, skin problems, kidney problems, vaccination sensitivity, allergies, bladder problems and hip dysplasia.

Costs involved in owning a La-Chon

A puppy of this mixed breed will cost between $450 to $1000. Where you buy from, who, what is included with the puppy and current popularity will affect that price. At the time of purchase you will also need some basics like food bowl, collar, leash, crate and carrier bag and these will cost between $100 to $130. There will also be possible medical concerns if they have not been covered by the breeder such as blood tests, deworming, shots, neutering and chipping. This will cost between $260 to $300. Then there are ongoing costs to be aware of, for both medical and non-medical things like food, long hair grooming, flea prevention, license, training, toys, health insurance, treats, general health check ups and further vaccinations. These could cost between $960 to $1175.

Looking for a La-Chon Puppy Name? Let select one from our list!

The La-Chon is a great dog especially for those who are less active or live in apartments. He is a nice mix of playful and affectionate, he will quickly steal the heart of anyone who brings him into their home and family. Just be patient with house training and stay consistent. If needed use crate training or seek out professional help.