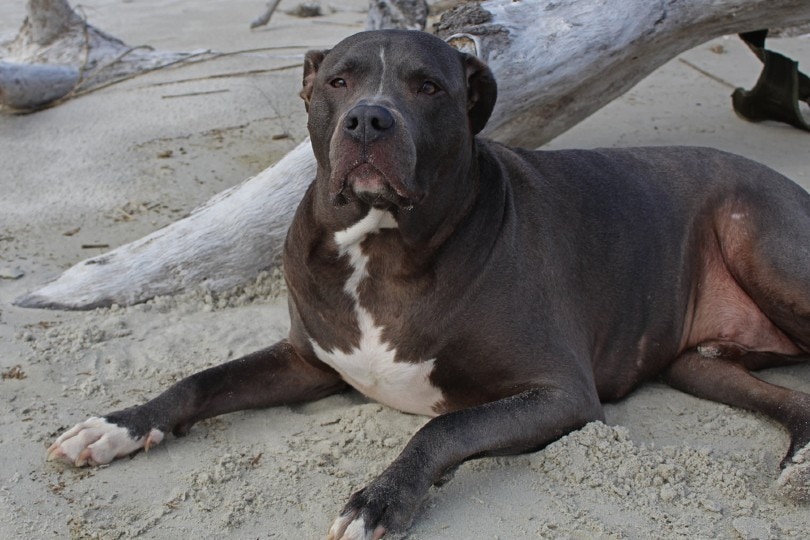 The Labrabull is a mixed or cross breed from breeding the American Pit Bull Terrier with the Labrador Retriever. He is a large dog with a life span of 10 to 14 years. He is also sometimes called a Pitador, Labrador-Pit Bull Mix, Pitbull Lab Mix or a Lab Pitbull Mix. He is a talented dog participating in activities such as herding, weight pulling, watchdog, agility, jogging and guarding. He is a powerful and protective dog who can also be affectionate and very loyal.

Where does the Labrabull come from?

There is no way to 100% predict what the offspring is going to be like when breeding two purebreds. There are some kind educated guesses you can make but there are no guarantees. Some get the best of both breeds, some are more mixed and some sadly get the worse! There has been a huge increase in mixed breeds in the last 20 years or so. A few have been bred for a purpose, some we have a little knowledge about, but most have been created by disreputable breeders just to make money. That is not to say there is no value in mixed breeds, owning one can be just as rewarding as owning a purebred. It just means the temperament is less predictable and there are bad breeders and puppy mills to avoid. Here is a look at the two parents to get an idea of what could end up in the Labrabull.

Labs comes from Canada originally, Newfoundland. They were bred in the 1700s to work with fishermen all day helping with nets, retrieving fish and lines. They would then return home with their master to be a welcome companion for the family. In the 1800s English sportsmen were visiting and greatly admired the dog for its work ethic, intelligence and loyalty so took some home with them. There they were used for hunting very successfully and were eventually called Labradors. In England they thrived but in Canada they actually disappeared due to new tax and breeding laws. Through the years the Lab has been used in other areas too such as police work, assistance work, search and rescue and more.

The Lab today is a super sweet, friendly, happy and eager to please dog. He gets along with all ages, all animals, other dogs and being smart too he is also easy to train. His exuberance can sometimes turn into boisterousness but some Labs can be more laid back. He needs to have a lot of physical and mental stimulation to keep him happy and healthy.

The American Pit Bull Terrier comes from the English Pit Bull Terrier who was bred in the 1800s for bull and bear baiting a spectator sport that was also thought to tenderize the meat. In 1835 that sport in England was banned so dog fighting replaced it and the Bull Terrier was used in that. Therefore the dog was originally bred to be aggressive, tenacious, physically strong and brave. They were trained to not bite humans. When they came to America they were bred with dogs there to make a larger dog and were used as farm dogs. They would guard the farm, help hunt large game and be a companion.

Today the American Pit Bull Terrier is an alert dog, still protective and wary with strangers but friendly once they are used to them. They loves being with their family, are affectionate and love to cuddle. In fact their weight does not stop them from trying to be a lap dog sometimes! Early training and socialization are important though.

The Labrabull is an alert and protective dog, powerful, loyal and enthusiastic. He can be aggressive if he thinks he or you are being threatened but with early socialization and training he is a well rounded dog who knows when a reaction is needed. He is intelligent so training should be moderately easy as long as you are established as the dominant one. He likes to chew so make sure he has plenty of okay things to do so. Labrabulls are energetic but also love to snuggle with you and have a sweet nature. He can suffer from separation anxiety if left alone for too long.

The Labrabull is a large mixed breed weighing 45 to 90 pounds and he can measure up to 24 inches in height. As with any mixed breed he can have any physical feature of his parents so his looks can vary. In general his head is wider and he has ears like a Lab. He has almond shaped eyes and a strong powerful body. His coat can be dense, silky, short and shiny and common colors are brown, yellow, white, tan and black. He has a long tail.

How active does the Labrabull need to be?

He has quite a bit of energy and is a fairly active dog. He will enjoy going for long walks, trips to the dog park, playing fetch and other fun games and chasing chipmunks! While access to a yard gives him some time outside he is not a dog you can leave in the yard and expect that to be most of his outdoor time, he needs real movement and activity. He is not really best suited to apartment living.

The Labrabull is intelligent and moderately easy to train. This means while he is not going to be hard to train he is also not going to be super quick and easy to train. It will take some time, effort, patience, positive training methods and consistency. Give him early training and socialization to help offset the tendency to chase smaller animals and to smooth out any aggression. He will need you to be a firm leader as he is a powerful dog and will expect his pack leader to be clearly dominant.

Living with a Labrabull

He will need a moderate amount of grooming. His coat should be easy to brush but should be done daily. He does shed, some owners say he is low shedding others feel it is more on the average side of things so you may need to vacuum regularly after the hair. Give him a bath when he needs one using dog shampoo only or there is always the dry shampoo option. Wipe clean his ears once a week and check them for infection. Do not insert anything into them, just use a dog ear cleaning solution on a cotton ball or cloth and wipe the parts you can reach. Clip his nails when they get too long or have a groomer or vet do it for you. Brush his teeth at least two to three times a week with a dog toothbrush and paste.

It is important to have any dog trained and socialized early on to even out their temper. This is particularly true for the Labrabull as the Pit bull side of him does come with some natural aggression. Well trained and cared for though Labrabulls will get on well with children, are affectionate, protective, happy to play and surprisingly patient. He can even get along with other pets despite his tendency to chase smaller animals.

He is a good watchdog and will bark to alert of any intruders. He will bark occasionally. He will need to be fed 3 to 4 cups of good quality dry dog food each day split into at least two meals a day. He does better in warm climates than really cold ones.

The potential health issues he could inherit from his parents include OCD, eye problems, heart problems, epilepsy, myopathy, bloat, hypothyroidism, joint dysplasia, acute moist dermatitis, cold tail, ear infections and allergies. Buying from a good breeder lessens the possibilty of having a dog with lots of health problems. Ask to see health clearances too when you are buying.

Costs involved in owning a Labrabull

A Labrabull puppy will cost between 75 to $400. They are quite low in price partly because of the pit bull side which many people misunderstand, are wary of, or are just not prepared to put in the work for. These are certainly not a very popular designer dog that makes the prices lower. Other costs to prepare for are blood tests to confirm health, deworming, shots, micro chipping and neutering. Also he will need a collar and leash, bowls, bedding and crate. These will cost between $450 to $500. Medical yearly expenses for shots, flea prevention, check ups and pet insurance will be between $485 to $600. Other annual expenses for toys, treats, food, training and a license will be between $510 to $600.

Looking for a Labrabull Puppy Name? Let select one from our list!

The Labrabull ideally need a specific type of owner. One who is committed to early socialization and training, committed to regular vigorous exercise, committed to establishing clear boundaries and committed to him, giving him love and attention. Experienced dog owners are the better option and ones who live in a house rather than an apartment. The Labrabull can be a very rewarding companion to have as long as he has someone who understands his needs.